All aboard the train to… 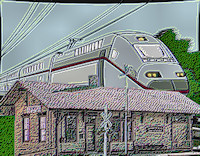 Stinging from attack ads from the Hynes campaign Gov. Pat Quinn made a whirlwind tour throughout the state with checkbook in hand. The account on which the checks were written is overdrawn but what the heck this is Illinois government.

Days after officials found out their routes would not receive funding as part of $8 billion in passenger-rail grants through the federal stimulus package Gov. Quinn told an audience in Rockford that $60 million in state capital funds will be used on a new Amtrak route between Chicago and Dubuque, Iowa. He also told a packed room at Moline Centre Station that $45 million in state funding for a passenger line from the Quad Cities to Chicago is a done deal.

The state of Iowa is tickled pink. Dubuque City Manager Mike Van Milligen and Chandra Ravada, of the East Central Iowa Intergovernmental Association, were estatic with the news.  Dubuque city officials already have preliminarily plans to build an intermodal transportation facility in the Port of Dubuque to serve passenger rail and bus traffic. Although the federal government rejected stimulus funding for the two Illinois routes, Quinn’s announcements ironically brought Iowa back in line for federal funding.

Gov. Quinn’s commitment for a Chicago-to-Dubuque Amtrak train rekindles the argument that was settled pre-campaign season. The feds had decided on the Canadian National route through Genoa over the Union Pacific route through Belvidere. That decision was determined by an Amtrak and Illinois Department of Transportation study that anticipated daily ridership, installation and maintenance cost per mile, etc. The Union Pacific freight line through Belvidere is in poor condition using 39-foot sections of light weight rail and ballast that is incapable of supporting passenger service. The Canadian National line is constructed of modern, continuous welded 136 lb rail with ballast to support Amtrak passenger speeds of 79mph.

With Quinn’s manuever decisions made by Amtrak and IDOT that were based on scientific study are now being bantered about as campaign folly by Rep. Dave Winters (R) and Rockford alderman Joe Sosnowski (R) who is running to represent Boone County and northern DeKalb County (Genoa) in the Illinois House who told media that the Belvidere route is probably the best choice. Strange combination: Winters, Sosnowski and Quinn.

Quinn said the $105 million for the two routes will come from the Illinois Capital Bill adopted last year.

“It’s a done deal. We have the money that we need in order to connect the Quad Cities directly with Chicago on a rail line, a passenger line. We want to move fast on it.” said Quinn.

He also said the plan is to start work on infrastructure on the tracks this year, and the lines could be up and running by early 2012.

One small problem for Quinn but one gigantic disaster for Illinois taxpayers could be that the Illinois Capital Bill adopted last year was to be funded in large part by video poker that although technically legalized on January 1 has yet to take hold. The gambling measure has been thwarted in several northeastern Illinois counties and communities who opted out of the legislation.

Nothing stops Union Pacific's freight trains (except for maybe a wayward monster truck). Amtrak on UP's rails tends to run late. Amtrak on BNSF's rails tend to run closer to on time. I do not know about Amtrak on CN's tracks.

Good article, Mac. This is really getting convoluted…Illinois, by building a rail line to Dubuque, puts Iowa back in the running for Fed money? Weird. I haven't heard much lately on the video gambling issue, I suppose its something they want to keep low key until after the general election? One certainty is that governor Quinn is essentially going about writing checks from a worthless account. I wonder how many days in the pokey I'd get if I tried that on a routine basis?