An Amendment for Reform 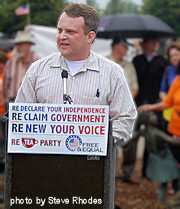 The “Bambenek Put-Back Amendment” is an extensive package of reforms designed to decentralize the power from the current stranglehold of Springfield power brokers and empower local legislators to truly represent their districts.

The amendment is carefully thought through. The primary change it would bring would make the Legislature a unicameral (one chamber body) called the Senate made of 59 districts where three Senators represent a single district. The current system, with a House and Senate body, is in a constant state of gridlock and places far too much power in the hands of the respective leaders.

It returns to “bullet voting” (voters can give all three votes to one candidate or give up to three candidates one vote). Bullet voting was repealed in 1980 and many believe that began the process of centralization of power.

Other highlights of the Bambenek Put-Back Amendment:

The Bambenek Put-Back Amendment Petition is currently being circulated in Illinois. 500,000 signatures are required for the initiative to be placed on the ballot.

It is also designed to withstand legal challenges that are likely to be filed to keep the amendment from ever reaching the voters.

Change is desperately needed in the Prairie State and this amendment provides the tools to get the job done.