Bad Boys, Bad Boys, What you gonna do

If it’s news happening here that’s news to us. We are DeKalb County Online.

When we saw Ryan Scott‘s (from DeKalb) video of his experience at an Illinois State Police Checkpoint here in DeKalb and saw where he was sharing and linking the video to we shared it on our Facebook page.

The video was created to go viral by a local man shooting a local video doing what he could to make it go viral is news to us. We wanted to know what DeKalb County people thought about his video.

So we could blog about it.

After watching the video a few times I arrived at the conclusion that Scott was fortunate he didn’t get roughed up and arrested. I admire and encourage the activism behind his effort but his patience or specifically the lack thereof put his and the officers’ safety at risk. His ability to remain calm contributed to his lucky break.

The video makes it pretty transparent that Scott was protesting the checkpoint law as unconstitutional and he was motivated to record the proceedings as he stuck to his rights without being confrontational. It was also clear that he was confronting the law with his protest. For officers just doing their jobs like they were told that action which began the moment the first cop began to explain what was going could construe Scott was being confrontational.

That first cop stayed to script and remained courteous and professional. The second cop that ripped the door open was clearly not courteous nor professional in his manner. He baited Scott to make a mistake which is not what someone authorized to use deadly force should ever do.

Scott was baiting the officers to see if they would make a mistake. Be careful what you ask for.

There is a steady stream of videos shared on social media that depict cops making mistakes and doing bad jobs. Many times with deadly results. Often with ordinary citizens being mistreated.

Of course there are also a lot of videos shared on social media showing people getting beheaded, murdered, robbed and beaten just for being in the wrong place at the wrong time.

That’s why we need cops. Considering how long mankind has been around and yet we’re still violently killing each other then the only safe thing to assume is we’re going to need cops for the foreseeable future.

People with agendas make videos and hope they go viral. Some of the anti-cop videos are produced as propaganda to confuse the unwitting about who the enemy is by folks who would rob your kid of their Halloween candy while they were trick or treating. Or worse. Much worse when war is in play.

So when a local video many might perceive as anti-cop goes viral we’d like to know how it plays in DeKalb County.

There were no real surprises. Some thought Ryan Scott was a hero, others felt he was a jerk. Some comments were more animate and/or less intelligent than others. The encouraging part is a discourse is taking place that is needed.

The Illinois State Police has apparently invoked their Miranda rights as did Scott at their checkpoint in DeKalb. Not a word or acknowledgement from them. But the DeKalb Police Department shared an infographic that explains some of the thought behind those checkpoints. They’re also considering putting video cameras on the uniforms of their officers as are other police departments in DeKalb County. The more transparency the better. 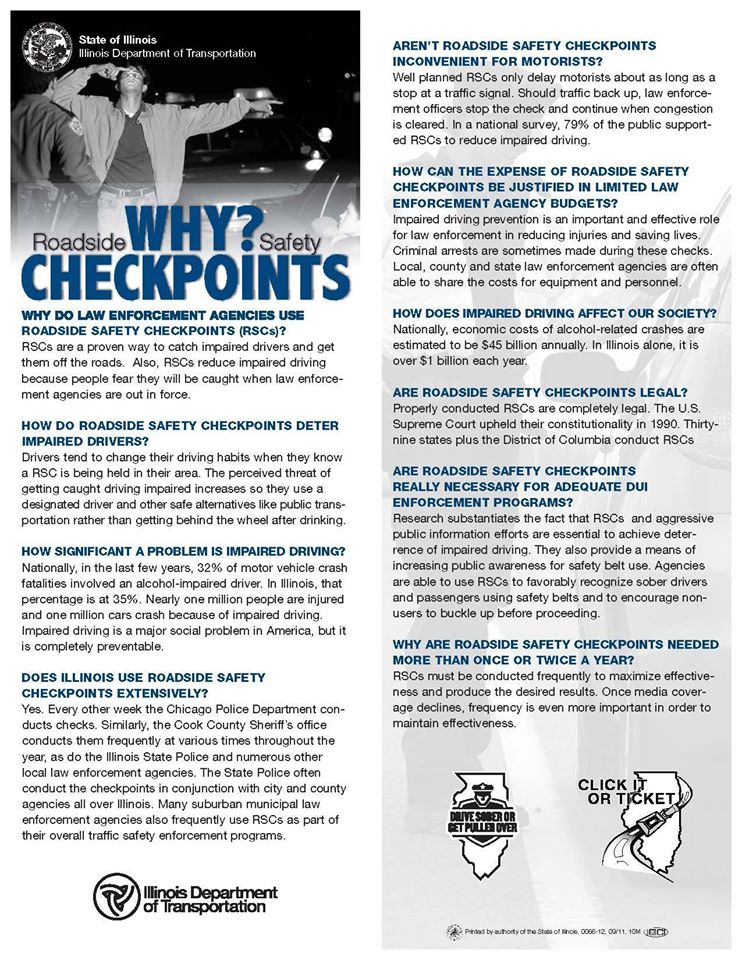 Personally, I hate checkpoints. If I see or learn of one I avoid if possible not because I’m doing anything illegal. It’s just a hassle.

As for the constitutionality of it all I don’t know and I don’t have enough money to pay an attorney to fight that fight.

The need? Debatable. Public safety as in the inspection of vehicles for dangerous mechanical conditions and the paperwork required (license and insurance) to operate one seems appropriate. In extreme incidents to find a dangerous fugitive a checkpoint is a needed tool. When it’s done as a revenue generator it’s flat out wrong and those responsible should be fired and shamed.

But the cop doing his/her job is rank and file. That job puts them in precarious positions that can result in the use of deadly force. It puts them in the middle of other people’s business when called. Yes, they signed up for it and they earn a middle class income for it. That’s why I appreciate what they do just in case I or a loved one ever needs to call them.

The protest and anger for constitutional rights is better aimed at their bosses and elected boards.

That being said good job Ryan Scott. A little more patience will go a long way. Here’s an inspirational song for you.