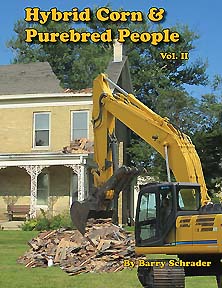 Barry Schrader, local author, editor, and historian will release the sequel to his first book, “Hybrid Corn & Purebread People” which contains 100 columns from the Daily Chronicle published in 2010. The new book, entitled “Hybrid Corn & Purebread People, Volume 2″ is 208 pages, containing 100 columns written between 2010 and 2014, with more than 600 local names, and 160 photos, some 40 of them not previously published in the newspaper.

Schrader will be at the DeKalb Public Library, 309 Oak Street, to sell, sign, and talk about his third book this Saturday, January 10th, 2015 from 1:30pm – 3:30pm. Besides the first book of columns in 2010 he has published a trivia history of Livermore, California and was also one of 18 authors of the DeKalb County history book, “Acres of Change” published in 2013. He has been editor of four newspapers in DeKalb County and later in the San Francisco Bay Area for 20 years, as well as 20 years in public relations and three years as a professional oral historian.

He and his wife Kay reside at Oak Crest Retirement Center since moving back to their roots here from California seven years ago. Barry is a fifth generation DeKalb County native, raised in Waterman and Genoa, then completing his Bachelor’s Degree in Journalism at NIU. Profits from the book sales today will be donated to the DeKalb Public Library Expansion Building Fund. For more information go to his website www.dekalbcountylife.com. This event will be held on the main level near the fireplace. For more information about the event, please email edithc@dkpl.org or call 815-756-9568 ext. 260.