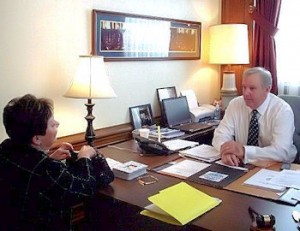 The media is reporting that Illinois lawmaker and current state senator from the 35th District, Brad Burzynski (R), is retiring.  According to reports he plans to leave office February 14th.  Burzynski served in the Illinois House from 1990 to 1993.  He’s been in the senate since 1993. Before serving in the General Assembly, Burzynski was a teacher, a band director and worked for the farm bureau. ﻿

Burzynski’s district covers a large section of east and southeast Rockford, plus areas of Boone, Ogle, LaSalle, and DeKalb counties.  Republican chairmen from all of those counties will meet to pick his replacement.  His term isn’t up until 2012.

From WREX TV in Rockford (Channel 13):

While Burzynski says he has no say in who is selected he does have someone he feels would be a good replacement.  He recommends DeKalb County Treasurer Christine Johnson. Burzynski says Johnson has been treasurer there for the past 17 years and has expressed interest in being in the legislature.  He says she has Winnebago County ties, but most importantly, she has values that are similar to his.

Burzynski says he and his wife have talked about this for a while.  He’s retiring to spend more time with her and their grandchildren.  They’ve added 2 new grand kids in the last 3 weeks.

You might also recall that Bob Pritchard in his first campaign for a full term to the State house used his incumbency to his advantage. His campaign signs said “RETAIN” Bob Pritchard…not “RE-Elect”

Kay — ha! They did and still do. He seems to be a good sign recycler.

Yes, the holder of the office is the incumbent, with publicity, name recognition and no doubt money-raising advantages too.

Rep. Pritchard’s campaign signs for the first election after Rep. Wirsing passed away said “Retain Pritchard” if my memory serves me correctly.

Ahhhh…I see, Lynn. My definition of “incumbent” is admittedly different from most. For instance, when Dave Wirsing died, and Bob Pritchard was appointed, I did not view Bob as the “incumbent” at the next election, although he clearly was the office holder at the time. To me, to be an “incumbent” in an election, one must have been previously elected to the office, not appointed. But I recognize that is not the dictionary definition. Whether it is an advantage to be an incumbent these days, that I doubt.

Kerry, I’m baffled by your bafflement at my pretend bafflement. Whoever gets appointed will indeed be a de facto incumbent by the time the next election rolls around, of course.

Lynn-I’m a little “baffled” by your “bafflement”. How can you say that the GOP will be fielding an incumbent in the next election? Seems to me, with Brad retiring and being the incumbent, the GOP will be fielding someone new for the 35th senate seat, not the incumbent. Is that the “advantage” you meant to speak of? By the way, Lynn, are you generally in favor or not in favor of term limits? Thanks.

I am glad that Mr. Burzynski is in good health, but baffled as to why we aren’t worthy of his keeping his commitment and finishing out his term. Well, not totally baffled: What a nice advantage he’s handing the local GOP that they will field an incumbent in the next election.