Buckle Up, No Matter Where You Sit

New Statistics Show Back Seat Passengers Still Not Buckling Up

With new survey results showing rear seat belt usage still lagging behind front seat occupants, the Illinois Department of Transportation (IDOT) and Illinois State Police (ISP) are reminding the public that anyone who rides in a motor vehicle needs to buckle up, no matter where they are sitting. 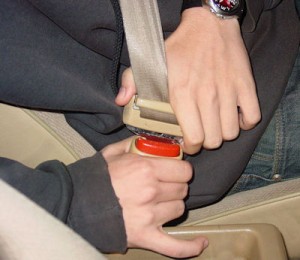 “Vehicle miles and fatalities are up on Illinois roads in recent months. We urge more back seat passengers to follow the law and buckle up,” said IDOT Director of Traffic Safety Jared Thornley. “Too many preventable injuries and fatalities continue to happen to passengers in the back seat. Increasing seat belt use means fewer deaths and serious injuries. It’s that simple.”

In 2003, Illinois passed a primary seat belt law requiring drivers and front seat passengers to wear a seat belt. In 2012, the law was expanded to require every passenger to wear seat belts, regardless of where they are seated in a vehicle.

Enactment of the primary seat belt law has increased seat belt use for front seat occupants by 19 percentage points, from 76.2 percent in 2003 to 95.2 percent in 2015. In addition, IDOT and ISP continue to raise awareness of the importance of buckling up through enforcement programs like “Click It or Ticket” and by continuously sharing seat belt safety messages via social media and public service announcements.

“Drivers and front seat passengers understand the importance of buckling up, but it is equally important for those in the rear seat to buckle up as well,” said Illinois State Police Col. Tad Williams. “The safety of everyone in a vehicle is dependent on all passengers wearing their seat belt. During a traffic crash, unbuckled passengers can be thrown around and cause injury to other occupants. As a reminder, all vehicle passengers are required to wear a seat belt. It’s the law and it can help save your life or the life of another.”