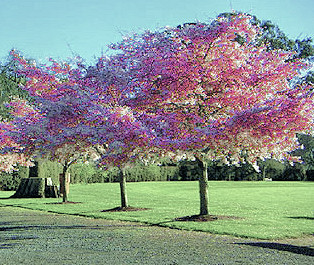 Brendon Gallagher’s (4th ward alderman) floating an idea to snazz up DeKalb’s East Side. In response to a petition drive by east side businesses, who are rightfully wondering when some public investment might be extended beyond the old central business district, Gallagher’s wondering what people’s take on planting cherry trees as a starter might be.

DeKalb’s South Side is wondering the same thing. Kay Shelton, 3rd Ward applicant, is promoting planting flowers in response. She thinks doing such would be an inexpensive way to kick-start beautification along South Fourth Street and increase community involvement. 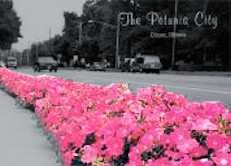 Both Gallagher and Shelton have referenced Dixon’s Petunia Festival as an example.

Back in the 1950s a combination of Dutch Elm disease and major highway expansion caused the removal of all trees along the community’s major streets. The Dixon Mens’ Garden Club responded by planting petunias along the right-of-ways. Half a century later the Dixon Petunia Festival culminates into a week long community wide party each year. Dixon receives national attention.

Cherry trees or flowers its a good idea.

Someone told me maples get into sewer lines and their roots can cause sidewalks to buckle. Willow trees would be disasters on parkways, as would walnuts by their height and stinky fruit. I do not know much about cherry trees. I have crab apples that smell great in the spring but get messy by summer and they would get into the power lines.

That is too bad it is just a little too cold here for redbud or dogwood trees to thrive. They do better about 150 to 200 miles south of here.

Whoops, I got my bugs wrong. I was thinking of the emerald ash borer. The Asian Longhorn likes a bunch of different trees, not just ash.
http://www.uvm.edu/albeetle/hosts.htm

DeKalb changed the ordinance that covers what trees can be planted in parkways, either last year or the year before. I haven't looked at it lately so not sure what's ok to plant. Power lines seemed to be the most important consideration to them.

There is a tree cities program that is coordinated, or at least used to be by the state DNR. At least that is what I remember. The city where I worked had that designation, and took it seriously. I worked with the state forester on this. There are certain varieties of trees that have worked out to be good ones for shade, and that do not sink roots into the sewer and water lines. The trees on the parkway, or terrace, between the sidewalk and the street are actually on city property. When we had to take down a diseased or decrepit tree on the terrace, the adjacent property owners were frequently incensed. I think that some appropriate tree plantings would be a great idea, but I suspect that the city would not want this on the east side because they most likely want to bulldoze most of those older houses, and put in yuppie condos over high end retail out there. What is good for Naperville, is also the goal for DeKalb, not withstanding that the former is in bad economic shape and the latter town in tottering on the edge of the economic abyss, too.

Ash trees. They are nicely shaped shade trees, too. One of my neighbors has one. It's fine so far.

What trees do those Asian Longhorn Beetles find yummy? I cannot remember if there is a specific tree those things infest. We would not want to attract any of them.

Hi Lynn,
You raise an interesting question. What is a Forestry Division for? Well, a good part of my childhood was spent walking to school in Downers Grove. In those days, the late fifties, there were enormous old elms lining all the streets. What I remember, and was fascinated by, was the Forest Department guys out there every day spraying the trees and then later, cutting them down. When I moved to Wheaton in my teens, I didn't see much spraying, but again the Forestry guys were most often cutting down or trimming trees. Hardly ever in those days did I see municipal employees planting trees. Now, with the newest threat to Ash trees, we will probably go through the spray/cut/trim cycle all over again.

Apparently, planting trees is not high on the list of things that should or must be done by municipal works crews. In fact, for years it seemed cities did not want trees because of the large amount of work required. I do remember though, in the 80s, Wheaton had a nice program of sharing cost and planting trees in front of homes. So apparently some municipalities do still think of these things.

Although DeKalb (and most municipalities) remain hard pressed for funds currently and must follow higher priorities, some sort of volunteer program, or perhaps later, a shared cost program to plant trees would be an excellent idea.

At the very least it is great to see people coming forward with low or no cost ideas to spruce up the city. I just hope no one suggests any more massive concrete planters such as in front of the post office. Maybe if the post office was the old style 2 or 3 story masonry building, these monstrosities would look good. But as they are, with a one story MacDonalds and Post Office on either side of the street, they look very out of place.

It would be my hope that any volunteer effort could produce not only a less expensive means for beautification, but also more aesthetically pleasing ones.

It was in the context of commenting on the last Econ Development Commission meeting, where they are enamored of forming a new TIF along the S. 4th Street corridor.

If you travel up 4th Street from Fairview to 38, notice how different the stretch from Fairview to Taylor is, from an aesthetic standpoint, as compared to that from Taylor to 38. Yes, there's a different proportion of commercial vs. residential properties, but the other part is the difference in green canopies.

What's a Forestry Division in a Tree City for, if not to improve the "desert" areas?

I like the flower-planting idea as well. In addition to affordable beautification, it would be a great community-building project as contrasted with the usual edicts handed down from on high.