Cinco de Mayo literally means “5th of May.” Many Americans mistakenly think it is Mexican Independence Day, but that is actually on September 16. What Cinco de Mayo commemorates is the Mexican army’s victory over French troops at the Battle of Puebla in 1862.

The Battle of Puebla had significance for the United States, because it thwarted the plans of Napoleon III to bring weapons and ammunition into the South to help the Confederacy. Consequently, Cinco de Mayo is actually more of an American holiday and is not widely celebrated in Mexico. Over the years, it has become a day to celebrate Mexican-American culture.

Locally, Jesus Romero, Owner of Taxco Restaurant in Sycamore, began a Cinco de Mayo Festival over 20 years ago that has grown into a much-anticipated community event. The celebration will kick off this year on Sunday, May 5 at 12:45 p.m. with a parade, beginning at Somonauk & Elm Streets in Downtown Sycamore and ending behind Taxco (223 W. State Street).

The festival will run from 1-7 p.m. on Bill Johnson Blvd behind Taxco Restaurant and on Maple Street. Traditional Mexican music and dancing will be performed throughout the day behind the restaurant. Children’s rides and games will take place from 1-5 p.m. on Maple street, including Pony Rides, Bounce House, Climbing Wall, Petting Zoo, Piñatas, and more! Parents can purchase a wristband for unlimited rides and games for $20 per child or buy tickets for individual activities. And, of course, delicious Mexican food will be available for sale throughout the day.

Proceeds from the event will be used to support the Kishwaukee College Foundation and various local non-profit organizations. Over the 22 years the Sycamore Cinco de Mayo Festival has been held they have raised over $160,00 toward local non-profits.

To learn more about the Sycamore Cinco de Mayo Festival, including a complete schedule of events, check out their website: sycamorecincodemayo.org. 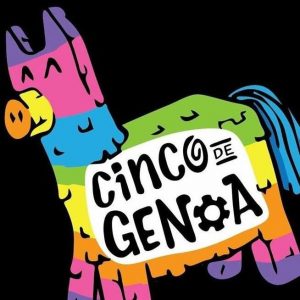 The neighborhood block party type celebration will be located in the parking lots south of Main Street along Route 23 in Genoa, from Tobinson’s Ace Hardware to River’s Mexican Cantina.

Every hour they will be breaking a Piñata filled with great prizes for kids and adults.