During the Monday night DeKalb City Council Meeting the City of DeKalb, Mayor Jerry Smith and City Manager Bill Nicklas will pay homage to the DeKalb American Legions Post 66 and DeKalb Legion Commander Dan Gallagher for their outstanding support of the various veteran projects for the City of DeKalb.  The Mayor will present Commander Dan Gallagher a proclamation for his outstanding work. 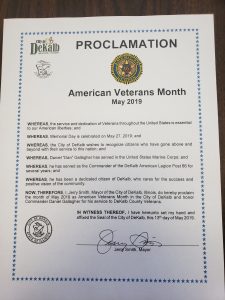 Members of the DeKalb American Legion Honor Guard will be starting the Council Meeting by doing the “Pledge of Allegiance.”

Following the presentation, a brief comment will be made regarding the new “DeKalb Hometown Hero” program created by the DeKalb American Legion to honor both veterans and current serving military members. The first veteran banner will be of DeKalb Mayor Jerry Smith, Sargent in the US Army.  Banners will be placed on Locust Street in DeKalb by Memorial Day. American Flag banners will be placed on Lincoln Highway (Route 38) as well from Memorial Day to the 4th of July.