The last political candidate to speak at our “Meet the Candidates” event on September 27, 2018 at Red Roof Inn DeKalb was Claire Ball, the Libertarian Candidate for Illinois Comptroller.

She grew up on the South Side of Chicago in the Mount Greenwood neighborhood and was home schooled through high school. She currently lives in Addison, IL with her husband and their two cats.

“I’m running for Illinois Comptroller because in the 200-year history of the State of Illinois we have never had an accountant, or anyone with any financial experience in the office of the Comptroller,” said Ball, “The Comptroller handles the financial reporting and cuts the checks for the State. In any other private business, you would find that person to be someone with a financial background, so the fact that we don’t have that, that’s a problem for me.”

She pointed out how Illinois has the worst credit rating out of all 50 states, the financial reports are issued late every year, and we have billions of dollars in unpaid bills every single year.

“I want to do the job of Comptroller,” said Ball, “I’m not looking to start or continue any kind of a political career. I am here to clean up the finances.”

She wants to audit the local levels of government, the municipalities, as both a resource and a supervisor to them. “If you can’t get help from the financial steward of the State of Illinois, that’s a problem,” said Ball.

She also wants to look for red flags of fraud, because it happens in Illinois so much (she gave examples from Zeigler, Ford Heights, and Dixon, IL).

She will also bring a level of independence to the role of Comptroller, since she’s a third-party candidate.

“The reporter of the state’s finances needs to be honest,” Ball said, “They need to be objective. And you need to understand at any given point in time where your money’s flowing and why it’s flowing there.”

Being a Libertarian, Ball is for legalizing marijuana. “I don’t use it myself. I don’t care if you use it,” said Ball. “But regardless of your personal feelings on it, the amount of money that we would save, not just from possible taxation, but from not incarcerating people for…a victimless crime” [makes it a good idea].

She also pointed out that people who have a criminal record due to marijuana use have a harder time finding jobs and are more-likely to be dependent on the state.

She has been doing a lot of research on taxes and realized that when our state instituted a temporary income tax increase in 2011, our pension backlog actually increased significantly.

“If you’d like someone qualified and not connected as your next Comptroller, someone who will speak out honestly and objectively about what’s going on in our state, that would be me,” asserted Ball.

She’d like to establish a table of criteria that makes it transparent who will get paid first in times of financial crunch and why they are going to get paid. The top of her list would be social service providers who rely almost solely on government dollars.

She was asked about the suggestion that Illinois combine the offices of Comptroller and Treasurer and she strongly opposes that. She said the Treasurer is like the State bank in that they hold the money and invest it. The Comptroller has authorization powers and record-keeping abilities. If you combine those three functions of custody of assets, authorization, and record keeping, it makes if very easy to get away with fraud.

Ball also can’t find any details that show how combining the two offices will actually save the state 12-13 million dollars as some people claim. If the money will be saved from sharing services, she said you can do that without combining the two positions.

Finally, she is opposed to combining the two offices because it would be eliminating a voice of the people by taking away one of the elected positions we have in the state and replacing it with several appointed positions.

“I’m always going to be in favor of more elected positions that people get to decide on, and less appointed roles,” said Ball.

“I love going to events where people come out and are genuinely interested in what their state government is doing,” Ball said, “It was really nice to hear from the different people running for County Clerk and County Treasurer and hearing what is important out here in the Sycamore/DeKalb area.” 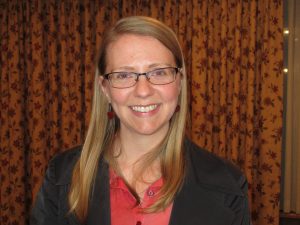 “All of the research I’ve done into the Office [of Comptroller] shows a disregard for the basic functions of accounting and finance in the state,” said Ball. “To me, it’s an outrage, because we hold each other to such high standards. Publicly-traded companies have to jump through so many hoops to stay in compliance; that a government doesn’t do the same is ridiculous and it’s dangerous.”

Then a friend gave her a copy of Reason magazine and it made a lot of sense to her and she realized she was a Libertarian. She has since been active with the DuPage Libertarians and decided to run for office after Judy Baar Topinka passed away and she saw that they were not putting forth qualified candidates in the 2016 special election.

Ball said that history has shown that Democrats and Republicans usually side with their party, while third-party candidates will act independently. She said will hold elected officials accountable, regardless of party affiliation. She said it is especially important in an administrative role like Comptroller, someone who deals with finance, that you have an official who will be absolutely objective and will give you a clear and honest picture of Illinois finances.