Country Store and Catering Featured on Sports Radio The Score 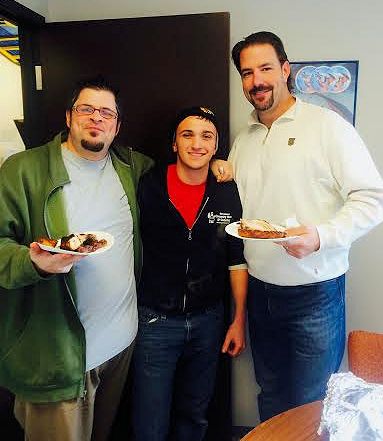 Sycamore Country Store and Catering and Chicago’s number 1 sports radio show, 670 The Score have teamed up to feature a reoccurring segment with renowned talk show host Matthew Spiegel and 16 year Bears vet Patrick Mannely in which only DeKalb County’s finest could deliver.

Victory Chicken Mondays is the name, when the Chicago Bears win or lose, chicken is brought in to the studio and 670 the score had been struggling with the search for a worthy sponsor.

Owner/butcher of the Country Store Thomas Ulrich and employee Zachary Guerreri are now the guys to bring in the chicken and other delicacies to the Prudential building downtown in which The Score is located. After having tried the Country Store’s food, they couldn’t get enough, with remarks such as “you gotta get hands on this as fast as humanly possible!” The Score announcers were ranting and raving over food such as their marinated butter garlic chicken, bbq rib tips and seasoned bone-in pork chops.

Check out The Country Store and Catering yourself near downtown Sycamore. Not only are they a full service butcher shop, but they are also open cooking lunch and dinners fresh, six days a week.  They are ‘The Butcher Shop that cooks!”