On this day, September 25, 2018, Tony Berg was the most-honored man in DeKalb County, if not the State of Illinois.

Under the auspices of a Senior Veterans pinning ceremony at Club 55 in DeKalb, Berg was presented with a number of certificates and gifts from local politicians and organizations, all the way to the President of the United States.

After the presentations to Berg, the Family Service Agency Senior Services and Heartland Hospice conducted a veterans pinning ceremony to honor all Senior veterans in attendance.

Berg, who turned 100 years old today, was honored both for his longevity, but even more significantly, for his service to the country as a World War II veteran. The DeKalb County Honor Guard, the Warrior Watch Riders, Family Service Agency Senior Services, Heartland Hospice, and a number of local politicians were on hand for the veterans pinning ceremony and surprise birthday party for Berg.

In addition, Berg was given a coin from the Warrior Watch Riders, an honorary Illinois 200-year-anniversary emblem from Representative Keicher, an honor quilt from the DeKalb County Quilters Guild, and a basket of scarves from the Senior Services needle workers group. He was also added to the DeKalb County Veterans Honor Roll.

Anton (Tony) Berg Jr. was born and raised in Des Moines, Iowa. He served in the U.S. Army from 1941-1945 in six military campaigns, seeing action in Tunisia, Sicily, Holland, Belgium, Germany and the Normandy invasion in France. His artillery unit was in the second wave on shore at Utah Beach on D-Day.

Upon returning from the war, Berg married his wife Gwen in 1945, became a bricklayer, and eventually started his own company. The couple had one child—their son, Steve—and settled in Long Grove, Illinois, where they resided for 51 years. In 2009, Gwen passed away at the DeKalb County Rehab & Nursing Center after 63 years of marriage to Tony.

In 2011, Tony and his two younger brothers, Harold and Bob, who also served in World War II, took an Honor Flight Chicago to Washington, D.C. to visit the National World War II Memorial. The event was covered in several media outlets. 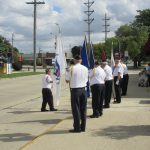 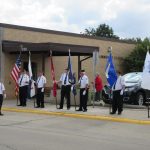 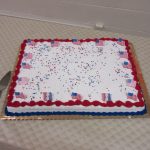 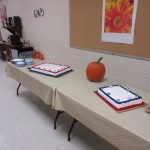 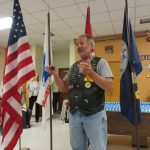 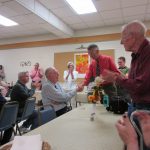 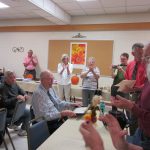 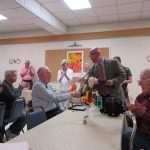 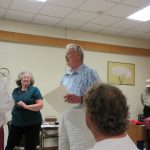 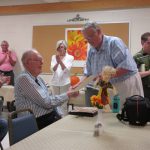 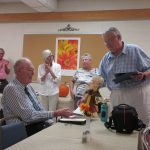 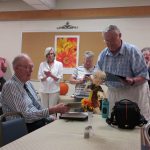 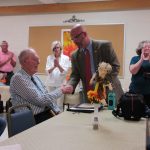 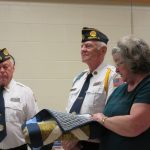 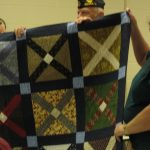 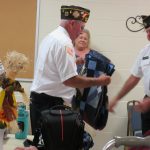 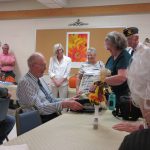 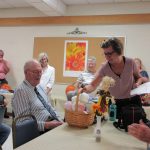 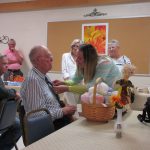 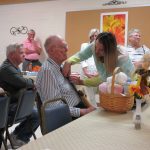 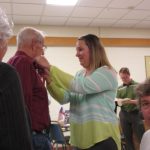 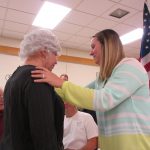 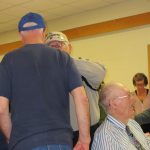 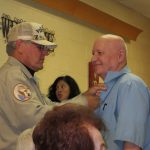 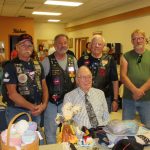 He was in Tunisia and Libya, not in Tanzania.

Thank You. From Conversation … confused by that, because you said North Africa and someone else said Tanzania. I guess it was a confusion between “Tunisia” and “Tanzania,” which is not in North Africa.

I will fix it.

I also heard people say “five campaigns” and “six campaigns.” Wasn’t sure about that one, either.

I always thought it was 5, but they counted them out from the unit history book I gave them, and it turned out to be 6. I’m not sure if he was in Libya, either. I know he was in Tunisia. His unit got to Africa after the Battle of the Kasserine Pass. They fired a lot of 105 mm rounds at Rommel’s Afrika Corps.

I know that he was in the second wave ashore at Utah Beach. He also met General Roosevelt there. He went all the way to the Elbe River where his unit was on one side, and the Soviet Mongolian cavalry were on the other side.

Happy birthday Tony. Thank you for your service.

What a great honor!