The DeKalb City Council will be having a Committee of the Whole meeting on Monday, April 8, 2019 at 5:00 p.m. The meeting will take place on the second floor Council Chambers in the DeKalb Municipal Building, 200 S. Fourth Street, DeKalb, IL.

During the meeting, Police Chief Gene Lowry will be giving the 2018 Annual Report on the work of the DeKalb Police Department. Below is a summary of that report, which is included in the meeting agenda (see bottom of article). Chief Lowery will touch on these highlights during his presentation.

Community Policing: In 2018 the following programs were implemented: The Safe Streets Initiative, COMPASS, Domestic Violence Lethality Assessment Program, and Project HOPE. The Safe Streets Initiative is designed to make neighborhoods safer by limiting on-street parking. COMPASS or Changing Outcomes by Making Parents Accountable, Successful, and Supported, opened a new door for early intervention for juvenile offenders. The Domestic Violence Lethality Assessment Program interdicts the cycle of relationship based violence through early victim support. Project HOPE or Heroin/Opioid Outreach Prevention and Education was launched on a trial basis to get addicts to treatment as soon as possible. In 2019 our overdose cases decreased by 42%.

Crime Reductions: As a result of proactive policing strategies and our strong partnership with our community, there was a decrease in our most serious crimes as reported in the Uniform Crime Reports. Combining 2017 and 2018 we saw a cumulative decrease in crime over two years that totaled 22% in our most serious offense categories. This was a tremendous accomplishment and the first quarter of 2019 is producing similar results.

The tables below highlight these advances: 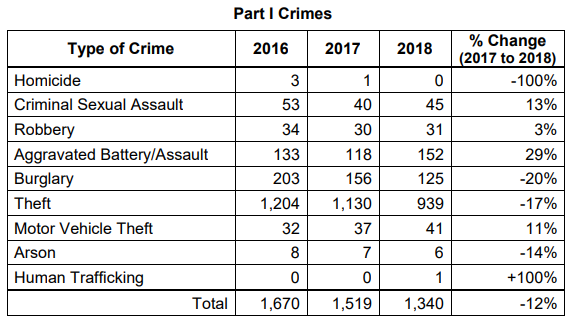 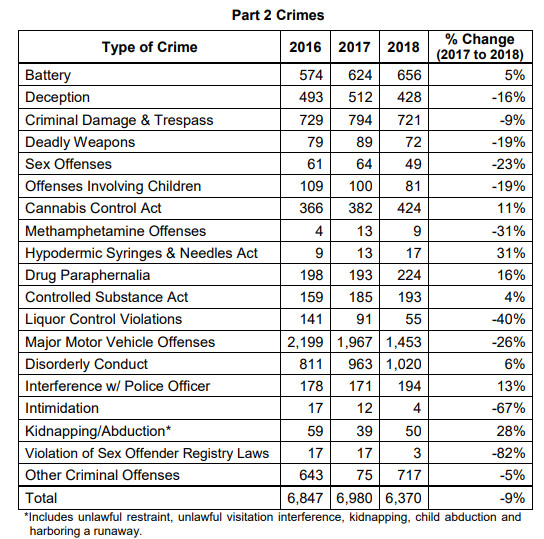 Police and Mental Health Collaboration Grant: In late 2017, the Police Department received a $75,000 Research & Planning Grant from the Department of Justice, Bureau of Justice Assistance, to initiate a Police-Mental Health Collaboration project. The purpose of the grant was to identify and form a partnership among law enforcement, social and public service agencies, and mental health providers in the community to identify service shortcomings to those suffering from a mental illness. The goal was to partner with a research firm to develop a Comprehensive Strategic Plan to identify the extent of the problem; to enumerate the strengths and weaknesses of existing mental health training and services along with the opportunities for improved coordination, practices, and protocols; and to devise a plan for continued collaboration among service providers.

Grant recipients also applied for additional implementation funds, and although DeKalb was not selected for this opportunity the project resulted in many positive outcomes. Tangible resources are also being developed as a result of this grant initiative such as Crisis Intervention Team training for police officers, a shared case management software system, and promising local grants to provide for additional research, training, and – potentially – an embedded social worker within the Police Department.

Policy Revision Project and State Accreditation: By the close of 2018, all of the department’s 115 administrative and operational policies had been reviewed and revised to reflect current operations, case law, and best practices. With the policies all conforming to the extensive professional standards published and promoted by the Illinois Association of Chiefs of Police (IACP), the department is proceeding with an official state accreditation through the Illinois Law Enforcement Accreditation Program (ILEAP).

Accreditation consists of an independent professional review of the department’s policies and requires documented proof that each standard is affirmed in both policy and practice. Assessors will be on site in 2019 to review the policies, inspect the facilities, interview officers, and engage the public to ensure compliance with the 180 established standards. This represents a major accomplishment in terms of an updated comprehensive policy manual and recognition as a leader in professional law enforcement.

911 Consolidation: The state is requiring a number of 911 Public Safety Answering Points (PSAPs) to consolidate, and DeKalb County’s 911 consolidation date has been set for June 1, 2019. The primary reason for the mandatory 911 PSAP consolidation is to lower the overall statewide cost of Next Generation 911, which is a pending technology project that will update existing 911 systems. After June 1, 2019, the Northern Illinois University Police will no longer be answering 911 calls that originate on campus. Those calls will be received at the DeKalb Police Department Communications Center. In 2018, progress was made with the telephone companies and other vendors to make this required transition, and meetings have been regularly held with NIU to make this transition as smooth as possible.

County Radio Project: The DeKalb County Sheriff’s Office embarked on a $4 million state-of-the-art countywide digital radio system in 2018, which will replace their existing analog VHF network in 2019. The DeKalb Police Department intends to join the countywide network upon its completion, which will save over $100,000 annually in fees that have been required of the state’s current digital Starcom network. As part of this project, the Police Department was able to secure the purchase of portable radios in 2018 for the new system at a drastically reduced cost and will realize other infrastructure savings as well when the project is complete.

Where Does DeKalb Rank in Safety Among Illinois Cities?

According to the Safest Cities in Illinois 2019 report by Safewise, DeKalb was ranked the 233rd safest city in the state. Their rankings are based on the number of reported violent crimes (aggravated assault, murder, rape, and robbery) in each city. Safewise used the most recent complete 2017 FBI crime report statistics, based upon the FBI Uniform Crime Reporting (UCR) program, as well as population data to adjust statistics to a per capita basis.

For comparison, the other DeKalb County cities on the list were Sandwich (#116) and Sycamore (#154).

Of note, DeKalb was ranked one spot behind Bloomington (#232) and ahead of both Carbondale (#240) and Champaign (#234). Cities where universities are located often have higher crime rates than comparable cities without universities, and DeKalb was ranked as safe or safer than these other cities in Illinois that contain mid-size or larger state universities.

Note: To view the entire meeting agenda below, mouse over the document and then click on the arrows to scroll through the rest of the pages.

Please share with friends. Thanks Police chief Gene Lowery for the efforts to make Dekalb a better place to live.