On a Sunday afternoon when business is usually slow in downtown DeKalb, Tapa La Luna was the place to be. A unique fund raiser was being held to honor the late co-owner, Rob Deshazer, where people donated the shirts off their back, as well as other clothing items. This event was organized by Amy Potempa, with the donated clothing items and
proceeds from the raffles going to a local organization, Hope Haven. 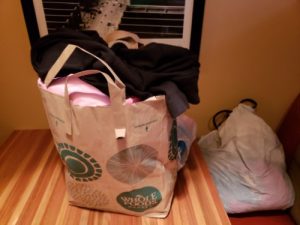 This project was begun by Rob Deshazer, who passed away from a heart attack at age 41 this October. According to Potempa, the concept for this fundraiser was started because of Rob’s love of people and giving back.

The quantity of clothing items collected was very large, with over three truck loads being sent to Hope Haven. Several attendees donated clothes literally off their backs as they strutted their stuff on the “catwalk,” before getting to be part of the traditional photo opportunity in front of the bar’s copper moon. Supporting this effort was Rob’s wife Tiffany Deshazer, who said she believes Rob will be smiling from heaven about all the people who loved him. 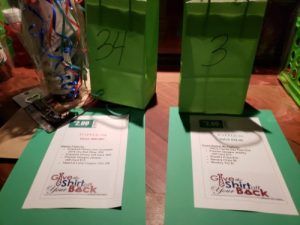 In addition, the money from the many raffle items will be going to support several community organizations including Hope Haven and Safe Passage. Local restaurants, including Fatty’s and Sweet Dream, also donated food.

It is events like this that show how much the people of DeKalb care about their community! #proudlydekalb