After thirty years with the DeKalb Fire Department, Chief Eric Hicks had been thinking about retiring sometime in the near future; however, administrative reductions recently announced for the department convinced him that now was the right time to go.

Chief Hicks’ last day of work will be November 29, 2018. His retirement will be formally announced at the City Council meeting on Monday night. They had a cake and coffee reception at the fire station Wednesday to send him off.

Chief Hicks put in his notice in October after learning about the reductions in administrative staff for the department, in hopes that they will promote one of the deputy chiefs to take his place.

“They’ll have a process, and hopefully they’ll take one of the internal candidates,” said Hicks. “I’ve been here quite a while, and it’s always good to have new ideas and new faces. It’s good for the organization to have some turnover at the top, occasionally.”

Eric Hicks grew up in Shabbona, IL and has lived in the area his entire life. After he finished school, he volunteered with the Ogle-Lee Fire Department while he worked for DeKalb Ag. Then one of his friends, who was with the DeKalb Fire Department, suggested that he come work for them.

Hicks tested with the department in 1988 and was hired in January, 1989. He never envisioned becoming chief at the time, but he worked his way up through the ranks over thirty years and was eventually appointed Fire Chief in 2012.

Chief Hicks said that what he will remember most is the people he had to opportunity to work with.

“It’s been a great place to work,” said Hicks. “Employees are all great. Everyone works hard here. It’s a great department.”

Chief Hicks also reminisced about how much things have changed over the last thirty years. He recently found an old map in his desk at home and was reminded how much DeKalb has grown while he’s been with the department.

He said the biggest change to the organization over the last thirty years has been technology.

“I can remember when I started, there was one computer in the station and I’m not sure what it even did,” said Hicks. “If you think of where we’ve come technology-wise over the last 10-20 years, it’s just phenomenal.” 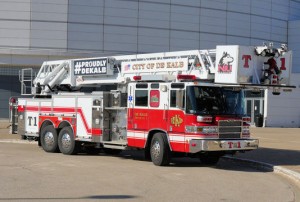 He said every vehicle now has one or two computers in it. Back in the day, they used paper map books to find their way around. Today, they are guided by GPS.

Chief Hicks said the most challenging thing for him to deal with is trying to do more with less. “Our budgets have not been great over the last few years and we’ve had to find alternate ways to get the job done,” Hicks said.

Since the 1980s, the number of calls has more than doubled, but the the number of firefighters in the department has stayed about the same. They currently have a staff of 57 people, including the Chief.

“I would love to add staffing and put more vehicles on the road, but it’s just not in the cards right now,” said Hicks. “Obviously, there won’t be a lot of big changes, because we just don’t have the funding.”

One thing he feels has been improved is the preparation of future leaders for the department.

“We’ve done a great job, I think, in some succession planning. That was one of the tasks I was given—to make sure that there were people capable of taking over the job when I left,” said Chief Hicks. “I think we have a couple candidates here who are able to take the job over and keep the operation going on seamlessly.”

When Hicks took over as chief in 2012 it was kind of a chaotic time, as the fire chief and the police chief had both left within two weeks of each other. There was only a two-week changeover period for leadership of the fire department. There had been no grooming, as Hicks wasn’t even in administration. In fact, there was nobody left in administration when Chief Harrison retired and took a job with the University of Notre Dame.

“It was kind of trial by fire back then,” said Hicks.

He said the role of Fire Chief in a department like DeKalb can be especially demanding because it calls for you to wear many hats.

“It’s a little bit different than some bigger communities,” said Hicks. “You have to be able to fight fires, be an administrator, be a counselor, be a budgetarian. It’s not a role where you can just sit back on your hands.”

The Chief said they have plenty of staff to run day-to-day operations, but when more complex incidents happen he goes out and assists them. He said he had actually been out on calls four times in the last couple days.

The job will be even more demanding for the next chief, as there will be one less person working 60 hours a week once Hicks retires, so everyone will have to shoulder a larger load.

Chief Hicks said he’s going to have to figure out something to do starting on November 30th, since he wasn’t planning to retire as of a month ago. Most of his family is still in the area, so he has no plans to pack up and leave DeKalb at this point.

One thing he is leaving behind is a legacy of public service that his children are continuing. His son is an EMT and is finishing up his fire fighting license. His daughter is also riding in an ambulance as an EMT right now while she’s in nursing school. His other daughter is a teacher.

wishing the chief nothing but the very best in his retirement. As for his pension, it is what was negotiated and management should have found a way to pay, or not agreed to those conditions.

These pensions are out of line! This is the reason why we are faced with staffing cuts. Exorbitant salaries and excessive pensions

Congratulations Eric . You have done a wonderful job!

Sounds like pretty good work if you can get it. Not a bad reward for risking your life for the sake of public safety, not to mention the risk of the fund you contribute to your entire career being âmisappropriatedâ.

Justin Heuer Where did you read 112k Pension? Although for a Chief in a large County, thatâs probably not out of line. Public service employees pay more into their pensions than folks in the private sector, throughout their careers.

It is not what they pay in, it is the mismanagement of funds by the state and unions.

Roy Rich 80% of last salary. If I remember correctly, in just 2 years most pensioners get out what they paid into their pensions. The DeKalb fire pensions are currently 40% funded. At some point they will become insolvent. The city has already cut police and fire because of budget shortfalls. This isn’t sustainable.

Pension funds invest funds over years and years, so the âthey get out what they paid in within two yearsâ really isnât valid. The funds they pay in, as well as the funds the cities pay in, invested properly over the careers, easily sustain the pension fund. Most funds are required to be fully funded for between 20-30 years.
If the managers of the funds whether it be cities, unions, or separate pension fund, mismanage or rob from those funds, then it is certainly not the employees fault. Blaming the pension fund woes on the pay structure is disingenuous.

Doing a little research showed the problem…..that these pension funds LOST money the past few years. That seems improbable, if properly managed. Smh.

His hair is not grey… he canât retire

Chief Hicks has also been very supportive of community projects including Kishwaukee Fest, Sweets4troops.com, Pancake Fundraiser to restore a local Firetruck and several youth projects. Good Luck Chief … you will be missed.

Congrats & Thank You for the many years Chief Hicks! Enjoy yourself!

Hopefully the city will hire a qualified replacement at a much lower salary.

Eat a Snickers bar, Charvat. Or, are you running low on peanut butter?

Mac Swan …. it would be nice to find a replacement that will have ten (10) years as the next new Fire Chief.