DeKalb writer and educator, Dr. Phyllis Gooden, doesn’t need to read a history book to learn about the Civil Rights Movement in the United States during the 1950s and 1960s, because she lived right in the epicenter of it—Birmingham, Alabama. 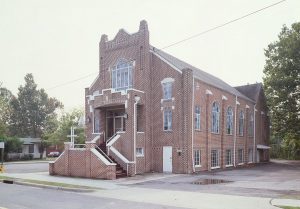 Gooden’s father, Reverend Herbert Gooden Sr., was an Assistant Pastor at Bethel Baptist Church in Birmingham and served alongside Reverend Fred Shuttlesworth, one of the most prominent leaders of the Civil Rights Movement. When Shuttlesworth left in 1961 to go to another church, Herbert Gooden led Bethel Baptist for a year from the pulpit until another full-time Pastor was hired.

Phyllis was a teenager in 1963 when Dr. Martin Luther King Jr. was arrested while visiting Birmingham and then wrote his famous “Letter From Birmingham Jail.” King had come to Birmingham to participate in coordinated marches and sit-ins against segregation that were organized by the Alabama Christian Movement for Human Rights (ACMHR), led by Shuttlesworth. The ACMHR was headquartered at Bethel Baptist Church and the group played a major role in the Freedom Rides in 1961.

Because of Fred Shuttlesworth’s outspoken activism for civil rights, the Bethel Baptist Church was bombed three times, in 1956, 1958, and 1962. The first bombing destroyed the parsonage, where Reverend Shuttlesworth and his family lived.

Gooden remembers those days growing up in “Bombingham,” as it become known.

“There were church bombings and house bombings all the time, so you grew up understanding it was a serious business,” said Gooden. “Churches in every community felt the inequality of ‘separate but equal’ obviously didn’t work, so naturally any church leader who was speaking out against that, their church was going to be targeted.”

The issue at hand was whether blacks should be allowed to ride public transportation, go  to school, or live in the same neighborhoods with whites. In Birmingham, the unofficial “color line” was Center Street, which divided the city between the whites on the West side and the changing East side where the African-Americans lived. If a black family attempted to move to the West side, their homes often had their doors burned, their windows shot out, or they were bombed. The neighborhood on the West side of Center Street even became known as “Dynamite Hill,” because of the frequent bombings. Often, the explosives were thrown from speeding off-duty police vehicles. There were 40-50 unsolved bombings in Birmingham from the late 1940s to the mid 1960s.

“It’s like anything with change,” said Gooden. “People resist changing what they’ve been taught. They think their way of life is threatened and they fight back. And if there’s not any type of restrictions…It’s sad to say, but you grew up in a time that you had to repress your knowledge base because of danger.”

What finally drew the nation’s and even the world’s attention to Birmingham was the bombing of the Sixteenth Street Baptist Church on Sunday, September 15, 1963. Four young girls were killed in the attack and 22 others were injured.

“Birmingham changed the whole nation and the world in knowing the seriousness of how violent [racism] could be,” said Gooden. “After they saw what happened in Birmingham, with the water hoses and the dogs and everything … now we have human rights issues and people saying, ‘That’s violating human rights. Let’s fight for human rights.'”

Despite the danger at that time, Gooden went about her daily activities as usual as she was growing up. Because her father was a minister, her family’s life revolved around serving the church. “Church on Sunday mornings was [everything],” Gooden said. “You didn’t think there was any other existence, except serving, until I got to college and I realized that people had other lives.”

Being a preacher’s daughter, Gooden took music lessons along with her sister, and her brother played two instruments. Their mother played the piano, sung, and spoke on Church programs. “It seemed that everybody on our street played some musical instrument or sung. It was like a conservatory,” said Gooden. “Music was a vital part of the community.”

Another activity which Gooden turned to deal with her situation was writing. “For me, my escape was to write about it,” said Gooden. She produced a play that had to do with the Civil Rights movement called “Preacha’.” In the play she emphasized the power of storytelling and the African-American venues where it took place, such as pulpits and front porches. She performed the play at churches around Birmingham and at the Alabama Jazz Hall of Fame, Birmingham-Southern College, and the University of Alabama at Birmingham. She also received two grants as the project director to produce events focused on storytelling.

Later, when she had the opportunity to study at Oxford University in England, she was invited to speak at the Universität des Saarlandes in Germany on African-American storytelling.

People still frequently ask her what she went through growing up in Birmingham during that time, and she points out that it wasn’t just an issue in Alabama or the southern states.

“It wasn’t just happening in the South,” Gooden said. “There were restrictions everywhere in America. This concept of it only happened in the South…We had the same concept, ‘If we can just get to the North.’ And a lot of people did migrate. Some of them had to leave because they spoke up. But then they came and saw that there was some repression up in the North, too.” 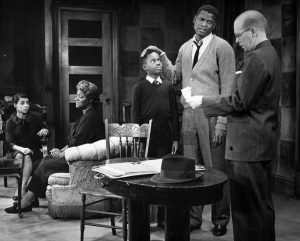 Gooden brought up the story of Lorraine Hansberry, author of “A Raisin in the Sun.” The ground-breaking play was the first ever written by a black woman to be produced on Broadway, as well as the first play on Broadway with a black director. The drama tells the true story of Hansberry’s family living under segregation in Chicago during the 1930’s and their attempt to buy a house in the white (at that time) Washington Park neighborhood.

The Hansberrys’ neighbors tried to force them out, and a representative from the real estate company even offered to pay them off to not live in the neighborhood. The neighbors eventually took the case to court, arguing that the Hansberrys’ purchase of the home violated a racially restrictive covenant signed by a majority of the homeowners. Hansberry v. Lee (1940) went to the U.S. Supreme Court, where the court ruled against the neighborhood’s attempt at racial discrimination. Even though the family won the case, Carl Hansberry died in 1946 when Lorraine was fifteen years old. “American racism helped kill him,” Lorraine Hansberry later said.

“People say they’re not prejudiced or that wasn’t during their time, and ‘Why are we bringing this back up?'” said Gooden. “People think it’s just those in the South, but if you look at the nation with a conscience, it affected everybody.”

Gooden recalls reading that during Reconstruction in the South, African-Americans were elected into political offices. Then Jim Crow Laws and Segregation laws were instituted. “They wanted to place African-Americans in demeaning roles, although African-Americans had accomplished a great deal,” Gooden said. “Now, we’ve had the opportunity to see a lot of African-Americans [accomplish great things]—from scientists, astronauts, Oprah Winfrey, Barack Obama—but there is still prejudice in America.”

“My concern for this nation is that it can get out of hand again,” said Gooden. “Why are people so afraid and try to restrict other people? What is the point?” My writing is my way to give hope and promote peace and cultural understanding. 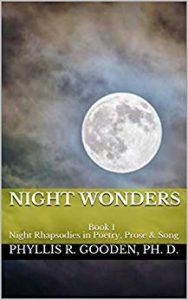 The poem below is from Gooden’s newest work, Night Forms, Book 2, from her Night Rhapsodies In Poetry, Prose, & Song Collection. Night Forms, Book 2 will be out in March, 2019. The first book in the series, Night Wonders, was published in 2018 and is available on Amazon.com. Gooden is currently working on a more detailed project, which presents the collective writings of her Birmingham experience and will be out by this summer (2019). You can check her website for more info: www.phyllisgooden.com.

When I travel or live away from the South,
Someone will invariably pick up my Southern accent,
And ask me about the South,
How my life was spent?
They want to know about my early years,
My family and my life events in the South, clear
Before my sojourn to the North
They want to know,
How did it feel to grow
Up during the Civil Rights Era, you know,
In a segregated city?  Birmingham?
As an African American?
They ask, and perpetually exclaim,
How did it affect you?
What did you do?
I smile and try to appear unmoved and cool
As I now know, we are all connected, as a rule.
And then I ask,
What effects did segregation in the South put to task?
On America? On the world?
On every boy and girl,
As we all grew?
What would you change in your actions, if you knew
The many effects it had on me, and not just a few?
What would you change, if now you know?
Would you continue in your mind to grow?
If you knew,
The effects of knowing would have on you? 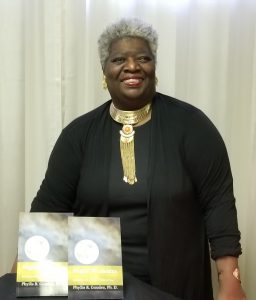 Gooden’s eventual relocation to DeKalb, Illinois was a circuitous one. She twice moved away from Birmingham, only to come back. She earned her Bachelor’s Degree in Fashion Design from Tuskegee University in Alabama, got a journalism internship at NYU, and worked in corporate advertising in New York. After returning to Birmingham, she went to Atlanta and worked as a fashion design illustrator for Macy’s and Graphic Designer for Georgia State University. Upon returning to Birmingham again, she spent a year listening to old stories on porches while looking for a job. It was during this time that she wrote her play, “Preacha’.”

After serving as a Community Education Coordinator for the Birmingham Public Schools, Gooden decided she wanted to teach at the college level and realized that she needed an advanced degree, so she applied to universities around the South and elsewhere. Northern Illinois University offered her an assistantship and an internship so she moved to DeKalb, IL 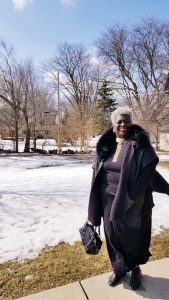 in 1996. She ended up earning her Master’s and Ph. D. in English/Literature & Film from NIU. She has since served in administrative and instructional roles at NIU, Kishwaukee College and an online global university.

Dr. Gooden has now lived in Dekalb for more than 20 years. “I like DeKalb and so does my family. It’s a good place to raise kids and grandkids,” said Gooden. “I also like DeKalb County. So now I write about cornfields and prairies. I intermix the Northern and the Southern.”