Life-long DeKalb resident, Patti Perkins, enjoys bringing her dogs to the library. But the dogs don’t come along with her for companionship; they are there to work. Perkins and her dogs are part of a weekly program at the Sycamore Public Library called “Books and Barks,” which allows children to read to the friendly pets to help them bone up on their reading skills.

Perkins began the program close to ten years ago as a way to serve the community, but also for her own benefit.

“I don’t have children and subsequently don’t have grandchildren, so this is an opportunity for me to be around children,” said Perkins. “And my dogs love kids. So we get a big bang out of this.”

The Books and Barks program takes place every Wednesday from 6:00 – 7:00 p.m. at the Sycamore Public Library (103 E State St). The kids get to read alone with a dog for a 10-minute rotation, and with regulars who come every week all six slots usually get filled. Perkins also participates in a similar program once a month at the DeKalb Public Library called “Read to Rover.” 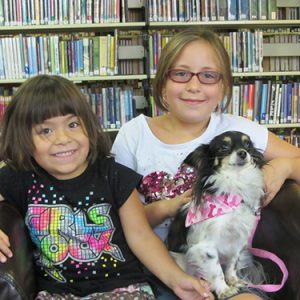 On this Wednesday, Perkins was there with Gracie Allen, an adorable Papillon and Chihuahua mix who is a certified therapy dog. Gracie’s three favorite things are kids, tummy rubs, and goldfish snacks, and she gets her fill of all three during her visits to the library. Gracie was rescued when she was a stray, but Perkins likes to say that Gracie rescued her.

In addition to Gracie Allen, Perkins’ other dog, Nicky, also listens to children read at the library. Nicky is a purebred Papillon and a veteran champion show dog. Perkins started the program initially with another Papillon named Sadie, who was a theater dog and loved people. Sadie was in some Stage Coach Theater productions, including a role as Toto in The Wizard of Oz. Perkins pointed out that Papillon means butterfly in French, as the dogs get their name from their distinctive, big ears—which may be why they are such good listeners.

Having children read to dogs is not just cute and fun; it also has very practical benefits—especially for kids who might be having some trouble reading.

Sarah Verkler from Sycamore and her 7-year-old daughter, Ella, are regulars at Books and Barks. They have been coming for about a month and a half.

“Ella has always been a very shy reader,” said Verkler. “This has helped build her confidence so much. The growth that she’s had in six weeks is incredible.”

Verkler said that her daughter sometimes gets really nervous or frustrated when reading to her or to her class at school.

Ella Verkler said that she has wanted to read to dogs “her whole life,” and she’s happy she if finally able to do it.

“The dogs are very cute and I really like reading to them,” said Ella. “It’s easier to read to dogs, because sometimes people don’t listen to me when I’m reading.”

Ella said that the dogs are good listeners because people train them how to listen and behave. She also reads to her dog, Lola, at home, but Lola isn’t as good of a listener. “She needs some work,” said Ella.

“We really appreciate all the dogs that come here and the owners who bring the dogs,” Sarah Verkler said. “They’re so nice and we’re so grateful for their help.”

Perkins, who is enjoying her retirement after a long, rewarding career as a project manager at Northern Illinois University, claims that she is the biggest beneficiary of the program, because she gets to be around really great families and wonderful children.

“All ethnic groups, all socioeconomic levels come to the library and avail themselves of the opportunity, and when they bring their children I get to participate, too,” said Perkins. “The libraries that we have in our communities here are spectacular. This is just one program of many that they have for all segments of our population, and I’m delighted to see people take advantage of them. We’re fortunate.”

To sign up your child to read to Gracie or other dogs at the Sycamore or DeKalb public libraries, stop by or call their Youth Services Departments.

This is all scientifically proven to help kids with their reading! Great efforts and who does not like a doggie? So sweet ð

Didn’t Greg Protano do this also?

This is such a wonderful program you are participating in and enjoying. The children definitely benefit from it, your dogs enjoy it and I know you enjoy it also!

Nice! Your little pups can put a smile on the grumpiest of faces. Thanks Patti for taking the time and making the effort to give this community some much needed love.

Those little doggies are so sweet and are happy to bring smiles to whoever is nearby. Thank you, Patti serving the community in many ways.

Thank you Patti Thompson Perkins for your efforts… I am sure your friends Cate Cardella, Ken Burton and Michael Embrey applaud you and your puppies for their great work.

Thank you. Gracie Allen, Nicky and I love meeting the children and their families. The pleasure is all ours.