A groundbreaking ceremony was held on Wednesday, May 1, 2019 to acknowledge the 4.5 million dollar expansion of the Egyptian Theatre. This date marks the 90th anniversary of the building of the original theater in DeKalb. 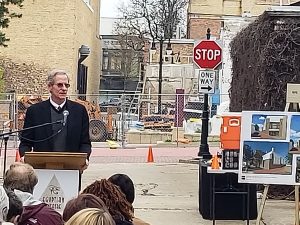 Part of the 4.5 million dollar expansion will be supplemented by $2.5 million the theater was granted in tax increment financing (TIF) from the City of DeKalb. The money for the improvement will include new washrooms on the main and upper level. The plans also call for expanding the concession stand on the main floor and in the balcony, as well as adding an area to purchase alcohol for select shows. 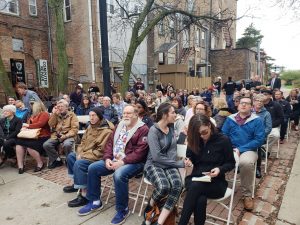 The event was well attended by a variety of community members and city officials. The president of the Egyptian Theater’s board, Dan Schewe, opened the ceremony. Following Schewe was a brief presentation by DeKalb City Manager, Bill Nicklas. Nicklas spoke on behalf of DeKalb Mayor Jerry Smith, who was in Springfield on Wednesday. Alex Nerad, Executive Director for the theater, was the keynote speaker and thanked the various people and organizations who helped make the expansion possible. 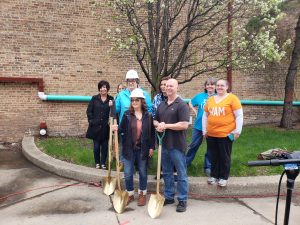 The community needs to remember that in the mid-1970’s the Egyptian Theatre was in disrepair and was slated for the wrecking ball. At that time, several people in the city stepped up to save the building with the primary charge led by Irv and Barb Kummerfeldt.

The 1920’s was a great time for building unique theater buildings, including the Egyptian Theatre. The first theater building boom took place in the early 1900’s. This included the Majestic Theatre (now re-named the CIBC Theatre) built in 1906 in Chicago. Another early theater was the Iroquois Theater (1903), touted as the first fireproof theater in America. Later that year the theater burned down and more than 600 people were killed. The theater was later rebuilt and is now the Nederlander Theatre (formerly the Oriental Theatre) on Randolph Street.

The other theaters from the 1920’s in Chicago included the Chicago Theatre (1921 – originally known as the Balaban and Katz Chicago Theatre), the Portage Theater and the Palace Theatre (now branded as the Cadillac Palace) on Randolph Street.

A lot of major theater construction stopped after the Wall Street Crash of 1929, but the Chicagoland area is still a major theater destination, with over 100 theaters of various sizes.