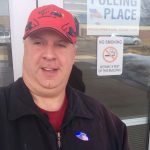 It’s time to end the ‘Snow job’ that 4th ward residents of DeKalb have had to endure for the last four years. On April 4th,  voters will have a chance to make a change and gain new leadership on the city council by voting to elect Patrick Fagan as alderman. The 4th ward has been misrepresented and under-served by its current alderman, Robert Snow.

As an active citizen who is fully engaged with issues going on in the city, I have always felt the need to maintain contact with my elected representatives. However, Mr. Snow refuses to stay in contact with me when I bring forth concerns. Mr. Snow has not responded to a single e-mail I have sent in over two years.  He also refuses to return phone calls and fails to hold meetings with his constituents. I’m not the only one with these concerns, other residents of the 4th ward tell me the same thing.

You will recall when residents of the city were being overcharged by the city’s contracted electrical supplier for two months in 2016, I discovered the error and felt it was my duty to report it to Mr. Snow. Mr. Snow was oblivious to the error and opted not to respond or do anything to correct the error.  The only way to get resolution was for me report it to the media and directly to the Public works director. Through our combined efforts, without Mr. Snow’s help, I was able to get the error corrected and to secure a refund for every DeKalb customer affected. Mr. Snow did NOTHING!

During Mr. Snow’s tenure on the city council, he has handed out pay raises to city staff, voted to raise your property tax rate four times, voted to fund several expensive studies, voted to increase executive staffing at an alarming and costly rate to taxpayers and voted for millions of dollars in TIF handouts to political insiders.

The good news is there is a 4th ward candidate that offers a positive change, Patrick Fagan. Mr. Fagan has pledged to respond to all residents that reach out to him a prompt timely manner. In addition, Mr. Fagan has been critical of the excessive amount of taxpayer money used for endless studies the city has funded, the relentless spending on staff additions, the increasing tax burden and pension funding liabilities the city is thrusting on it’s residents.

Mr. Fagan will keep an eye on costs and wasteful spending and will conduct his own additional research on issues that come before council and not be solely dependent on information spoon fed by city staff.  He will also see that your elected officials, instead of city staff are setting policy.

I should point out, I took over 2 1/2 hours to meet with Mr. Fagan in person to discuss city issues. Mr. Fagan was quite frank and his views on things, and was very open to discussion. In no way, do I think I will agree with everything, any individual who is running for elected position will vote on, but, the fact that Mr. Fagan reached out to me, to hear me out, is a positive sign. my short time discussing issues with Mr. Fagan, was more that I received in four years for our current elected alderman.