‘Fiddler on the Roof’ opens Friday 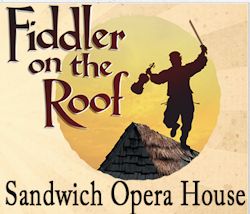 The play which has been called “the world’s most acclaimed musical” when 14 companies were touring Europe, “Fiddler on the Roof” opens at 7:00 p.m. this Friday, November 15th, 2013, on stage at the historic Sandwich Opera House. The musical will continue through November 23.  The production includes a universally appealing musical score with classics such as “Tradition,” “To Life,” “If I Were a Rich Man” and “Sunrise, Sunset.”

Fiddler has charmed audiences the world over since it opened on Broadway in 1964, winning 10 Tony Awards, including Best Musical, score, book, direction and choreography. In 1971, a highly successful film adaptation was made.

Set in the tiny village of Anatevka in 1905 Tsarist Russia, life is simple and full of tradition. Tevye, (Bernie Schuneman, Sycamore) is a poor milkman with philosophical leanings. He struggles with change, both within his own family, and the changes sweeping through his village. He and his wife Golde (Amy Daly, Millington) must cope with the task of not only surviving the harshness of the winter cold under Tsarist rulers, but also with changes impacting the very foundation of their Jewish faith, and the fabric that holds their family together.

As if marrying off his five daughters isn’t challenging enough, Tevye’s friend, the Constable (Adam Diveley, Plano) brings news of political upheaval. Tevye must wrestle with breaking tradition and allowing his daughters to have their happiness, or stick to his religious convictions.

“Fiddler on the Roof” is the story of love, faith, family, friendship, humor, prejudice and hate – and a strong sense of community. The musical score is timeless.