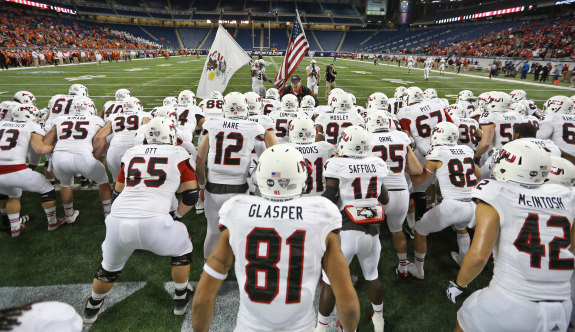 Tickets to any of the Huskies’ six home games can be purchased 24 hours a day, seven days a week, online at NIUHuskies.com/tickets, by calling 815-753-PACK (7225) during regular business hours, via Ticketmaster at Ticketmaster.com (1-800-745-3000) or in person at the NIU Athletics Ticket Office in the NIU Convocation Center. The Ticket Office is open 9 a.m.-5 p.m. CST Monday through Friday.

NIU will also be offering a 50th anniversary ticket special throughout the season. Presented by Hy-Vee, and available only on NIUHuskies.com/tickets and Ticketmaster.com, a limited number of these single-game tickets in sections A and G on the West Side can be purchased for only $19.65 while supplies last.This is an online promotion only and tickets must be purchased online. Just enter promo code “1965” and you will have access to purchase as many tickets as you like.

Huskie football season tickets remain the best value in Chicagoland with the entire six-game season available for prices starting at just $99, a 61-percent discount off the single-game price. Faculty and staff, senior citizens (62 and older) and NIU Alumni Association members can purchase season tickets for just $115. The new Huskie Family Plan includes four season tickets for $299 in sections A, B, F or G of Huskie Stadium.

In addition to exciting NIU football and #MACtion, there are many outstanding promotions going on in 2015. NIU, which has won three of the last four Mid-American Conference championships while playing more games than any Football Bowl Subdivision team in the country in the last five seasons, will be celebrating the 50th anniversary of Huskie Stadium all season long. A reunion of the original team to play in the stadium, the 1965 NIU squad, will take place in the season opener against the Rebels. The game has officially been designated “Ag Day” and “DeKalb County Day” to honor the surrounding communities with special events and displays prior to the game.

One week later, NIU will take on Murray State University at 2:30 p.m. Saturday, Sept. 12. At the same time, NIU will host Band Day, Scout Day and Family Weekend activities, all set for this game.

On Saturday, Oct. 10, NIU will face Ball State University in the Battle for the Bronze Stalk on Hall of Fame Weekend. It is also Breast Cancer Awareness month and the Huskies will have several promotions in line for that effort. In addition, the Ball State game falls during National Hispanic Heritage Month and NIU will be reaching out to select groups in that demographic.

Of course, Saturday, Oct. 24, is NIU’s 109th homecoming game, with all of the festivities and pageantry that Huskie fans have come to expect. NIU will also be honoring all young football players in the area for Youth Football Day. NIU will play host to Eastern Michigan University that day with kickoff set for 2:30 p.m.

Following two straight road games, the Huskies return home to close out the 2015 campaign at Huskie Stadium. On Wednesday, Nov. 18, Western Michigan University comes to town for a 7 p.m. kickoff. It will be Hero Appreciation Night to honor all military personnel, veterans and first responders.

The regular season comes to an end on Tuesday, Nov. 24, when NIU honors the 2015 senior class on Senior Night. The Huskies’ 6:30 p.m. contest with the Bobcats will feature the annual blackout game. All fans are encouraged to wear black and bring a canned food item to the game for NIU’s Student-Athlete Advisory Council’s canned food drive that night.