Why I formed DeKalb County Taxpayers 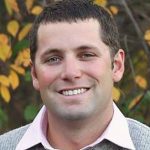 DeKalb County Taxpayers began with my own property tax appeal. I received notice of an assessment change with no details to support it and since I had made no changes to my property, I began to do some digging, beginning with gathering the data I would need. I would start with a property record card, the document on which the assessor inputs all home & land characteristics (square footage, total bedrooms, bathrooms, basement, etc). In order to obtain a copy, I had to go the local Assessor’s office, where they pulled a card out of a file cabinet of over 10,000. Not everyone has the time to do this in the thirty days allotted and within the Assessor’s less than 30-hour work week. I wondered if this was by design. Nonetheless, I completed the paperwork and filed.

The experience really got me thinking about the process a homeowner must go through to obtain information. As I pondered how this process could be dramatically better with the help of technology, I continued my research by assisting friends and neighbors in understanding and appealing their taxes. The bigger picture began to come together: many property owners had simply stopped paying attention or given up after one or two failed appeals. The difficult process, lack of work ethic on the part of the government employees that are supposed to represent us, and inconsistencies from neighbor-to-neighbor were being accepted at face value. This is Illinois, after all, with the worst-run government nationwide by many accounts. Maybe we’ve just come to expect that?

I continued on with my own appeal, and despite the nods in presenting my airtight case at the County level, was met again with complacency. I was returned a generic, even, and just slightly-lowered assessment. It looked as though someone had written down an arbitrary number on a cocktail napkin and passed it back to me after six months. The homeowner who appealed after me, a friend, received the exact same reduction that I did, despite having different homes and land characteristics. I asked for documentation as to how this perfectly-round number had been concocted; none was provided. Now I was frustrated with both the Assessor and the Board of Review.

This led me to look into how the Board of Review was appointed. I went to that County Board meeting with a stack of paper and list of questions: Who vetted these men? Did the County Board know what was taking place on the fourth floor of the county building? I was met with looks of disbelief at what I shared (think: relatives appointing relatives, past ethics violations, etc.). To the County Board’s credit, they immediately tabled the nominations. The information I shared would be passed to the Economic Development Committee to consider before reappointing Board of Review members. I then took a deeper look at where the members of the Economic Development Committee live in our community. I found that one member that was paying half of what his neighbor was, on an adjacent, identical lot. More appearance of impropriety.

I went to Economic Development Committee’s monthly meeting armed with 50 neighbors. I hoped to demonstrate what I had found – the inconsistencies, the broken process to obtain information, etc. I knew it in advance it would be difficult to express everything I wanted to say in the three minutes I would be allotted. But one-by-one, my neighbors stepped up to give me their three minutes and I was able to fully present the arsenal of information I had gathered. I realized this project I had been working on was bigger than I had thought.

I learned through my research that there is a database that houses most of the property tax data, but that it’s not accessible to citizens. And why would it be? The bureaucracy makes it harder for taxpayers to fight unfair assessments. Furthermore, today our local government has no incentive to improve its efficiency or its relationship with the community.

My goal has grown from simply fighting property taxes to helping bring real reform to DeKalb County. I would love to see our citizens vote for a referendum next election for an independent efficiency audit of the agencies that are levied against our properties. I have filed non-profit paperwork in the hopes to raise money to make this happen. I think it’s time that our local taxing bodies are held accountable for their actions and I’m excited for what’s to come. 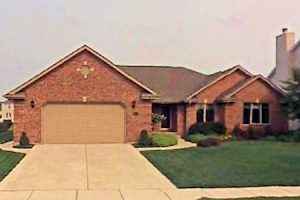 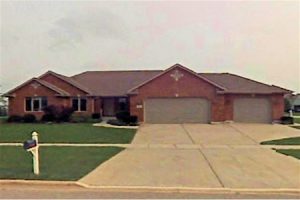 Example 2 – This home is assessed at $19.54 per square foot. It is one block away from the house pictured in Example 1.

ASSESSMENTS DONE ON A BY WHO YOU KNOW BASIS?

This results in a difference of $1,802 dollars in property taxes due between identical, adjacent lots (note: this number does not include taxes on the dwelling/home). 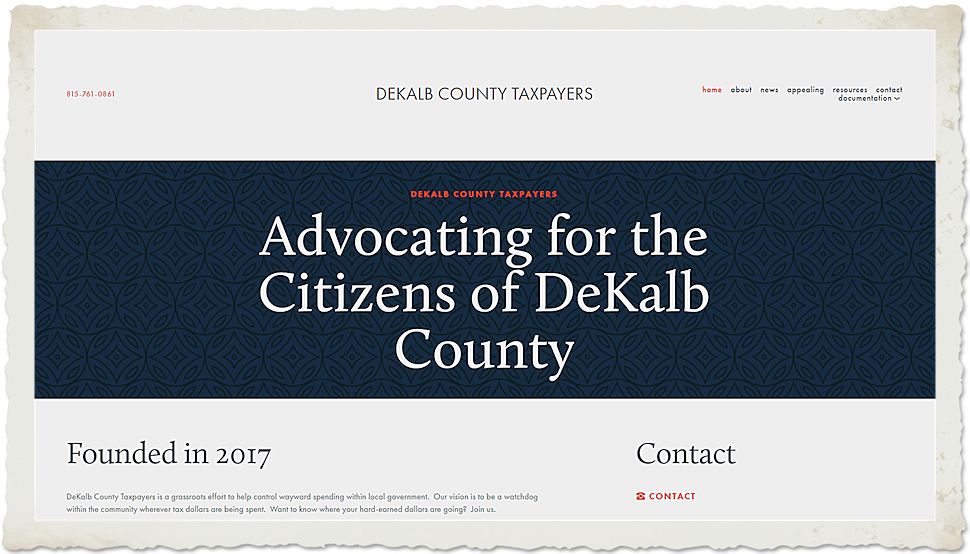 We hhave also offered a workshop on how assessments are suppose to work and what the process is at county level, open to the public.

I am unaware of any county board member filing an appeal to have their assessments lowered. I know some board members are veterans or seniors and qualify for more exemptions.

At the DeKalb County Board level we take input from all residents. The county listed online and in the paper an opporunity for residents to test to earn certification needed to be a member of the Board of Review. The board is set up through state statute to be comprised of a majority of the party from the highest elected official vote count which is Roger Scott. So two positions are Republicans and one is a Democrat. Myself, Chair of Economic Development, Tim Bagby, and the county assessor interviewed the current board of review members up for reappointment and those that took the test and wanted to be part of the board. Only three people, two Democrats and one Republican took the test and passed. I was hoping we would get more test takers to expand our pool of potential board of review members.

From the interview we wanted individuals on the board that stuck to the rules developed and to have them apply those rules equally to everyone. We also wanted to really have board members look at ways township assessors are assessing property across their townships and to work with all on consistencies in neighborhoods, developments, etc…

I thanked the Board of review chair for his service of 32 years and appointed former Republican county board member, Anthony Cvek to to take that spot and be a member of the board and help us bring about any needed reform.

We will continue to create an open process for those interested in becoming a member of the board of review and offer a test date prior to other openings. We also have members serving as alternates on board of review.

It is important to note that assessments start at the township level by an elected or hired assessor. If someone disagrees with their township assessor they can run against them or find someone to run against them. Again, there is a certification requirement for that position.

In an appeal of the township assessors assessmebt it goes to our county assessor, if the property owner still disagrees it goes to board of review and if they still disagree it goes to the state where they make a final ruling.

Myself and others are firm believers that no developers, elected officials or anyone should get different/special treatment. Everyone should have to follow the same rules and fairness should be applied.

Thank you Ryan Cardinali! The process does appear to be structured to discourage the tax payer. We asked the Township assessor to reevaluate the assessment, she said she would not change it and for us to file an appeal. No reason given for the refusal to reevaluate. When questioned about the process she gave vague or general answers, no details. TAXPAYERS EVERYWHERE: Keep appealing those assessments! Even if you don’t win an appeal keep appealing. Get your neighbors to do the same. Eventually they will learn to put some real thought into it before they slap an arbitrary number on assessments in your area.

Perhaps Ryan can provide some details on where he got these numbers?

Right, I’m just saying, I found and looked up property A and it doesn’t match your numbers. I haven’t found property B yet. I did look up everyone on that committee and none of them live in the property B so I’m pretty curious.

Matt there is two separate examples here, one showing no consistency with price per sqft, and another with neighboring Lot values. The Lot values were not intended to go with the homes pictured.

There are four pieces to reference.Example 1 and 2 are totally separate parcels from Lot A & B

For clarification we added the text “not those pictured above” to the Lot A and Lot B example as they are not the same properties illustrated in example 1 and example 2.

I would recommend that you donât trust Zillow, and perhaps go get the record cards and verify the math provided. After all, the local assessors are using the record cards not what a realtor possible misrepresented at the time of listing!

Have you measured the actual square footage of the home in question? Perhaps both numbers are incorrect…

I don’t see anyone on the economic development committee that resembles the figures quoted. That’s a pretty big accusation. Which member are you referring to and what address?

I highly doubt that both are incorrect, but the fact remains you must use the legal documents provided by the Assessors to appeal.

Thank you for your work and initiative Ryan.

Mark Pietrowski Jr. Was present at these meetings, and really did not offer any solutions.

It kinda looks funny and smells bad when those on the inside are assessed much lower than Joe Citizen.