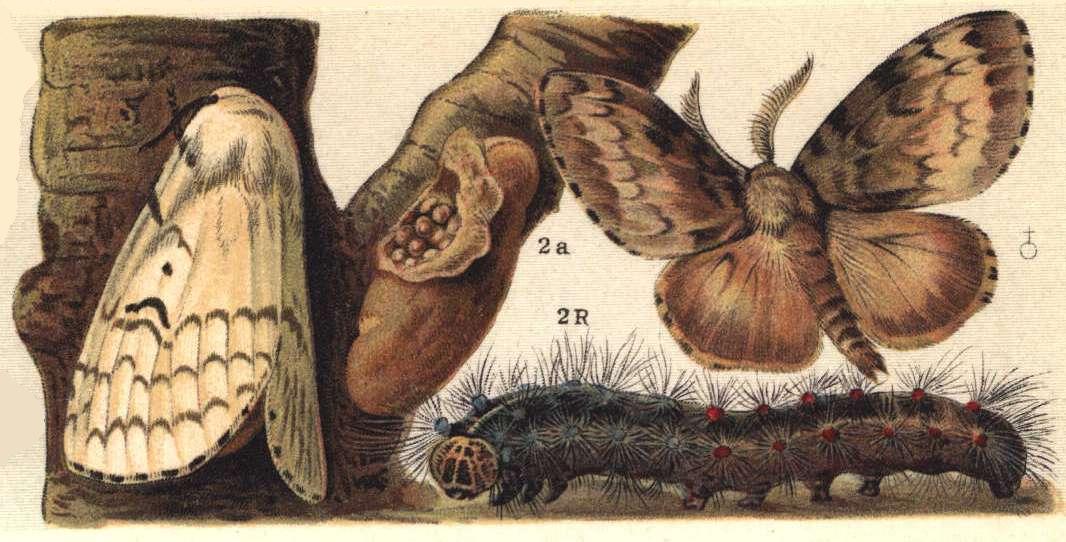 The Illinois Department of Agriculture would like to remind northern Illinois residents that the state’s scheduled Gypsy Moth treatment began in the morning of Monday, May 8th.   Gypsy moth is an invasive pest that destroys trees and shrubs.

The Department, in conjunction with the United States Forest Service, plans to treat more than 54,000 acres this year, including locations in DeKalb, LaSalle, Livingston, Carroll, Jo Daviess, Stephenson, Ogle, Will, and Kendall counties.

If weather permits on Monday, the locations identified in the table below (Table 1) will receive an application of BtK, a naturally-occurring bacteria used as an environmentally friendly alternative to chemical pesticides.  The BtK will be applied by helicopter or airplane with a second application being done within the following two weeks.

Other locations, identified below in Table 2, will receive a pheromone application in late June.  The pheromone application serves as a sexual attractant that confuses male gypsy moths and prevents them from breeding.   This, too, is an aerial application.  The product used is an organic, biodegradable material made entirely of food grade materials.  It does not impact other insects, mammals or the environment.

Maps of the treatment sites are posted on the department’s website at www.agr.state.il.us.  A list of the impacted sites and their scheduled treatments follows:

Earlier this spring, the Department of Agriculture added four additional northern Illinois counties to a quarantine order aimed to control the spread of gypsy moth.   Kendall, Kane, LaSalle and Will counties joined Cook, DuPage, Lake and McHenry counties in the Department’s quarantine order.  Lake County was the first county in Illinois to be quarantined, which was established in 2000.

The gypsy moth is a non-native pest.  Large populations of the pest are capable of stripping plants bare, leaving them susceptible to disease and environmental stressors. Severe defoliation can cause tree death. Unlike the emerald ash borer, another non-native pest which feeds exclusively on ash trees, the gypsy moth is not a picky eater.  It will devour almost anything leafy and green, as it feeds on over 250 species of plants, however it especially prefers oak and willow trees.  Male gypsy moths are brown with black markings and have a wingspan of an inch-and-a-half.  Female gypsy moths are slightly larger and typically white or cream-colored.  The females cannot fly because of the weight of their eggs.

Under the quarantine, all nursery and lumber products must be inspected or certified before they can be transported out of the eight counties.  In addition, residents of these counties must personally inspect vehicles, tents, outdoor lawn furniture, bicycles and other outdoor items for gypsy moth egg masses, live moths and caterpillars before taking them out of the quarantine zone.  Anyone convicted of illegally removing prohibited items from the quarantine area may be fined up to $500, and the items themselves must be either immediately removed from the non-infested area or immediately destroyed.

Anyone with questions regarding the gypsy moth treatment schedule or the quarantine order are urged to contact the Department of Agriculture’s DeKalb field office at (815) 787-5476.