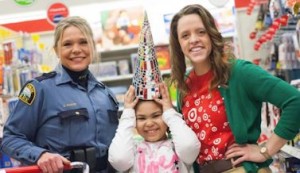 The DeKalb Police Department’s Benevolent & Protective Association and Target in DeKalb, would like to announce that this year’s Heroes and Helpers program will be held on December 8th, 2013 at the Target store in DeKalb, IL. The DeKalb Police Department and Target understand that some families are having difficult times. In an effort to alleviate some of their concerns, they are offering children in special situations a way to have a wonderful Christmas. These children will have the opportunity to buy Christmas presents for themselves and members of their family.

They will also get to have their photo taken with Santa at no cost to the family. Children participating in this event are residents of DeKalb and are picked with the assistance of the DeKalb School District. Children selected will be notified by the DeKalb Police Department prior to the event.

Each child, with the help of a DeKalb Police Officer, will pick out $100.00 worth of Christmas presents. As the program’s name suggests, the children are the Heroes and the officers are their Helpers. The presents, which are wrapped by Target staff members, will be delivered to the police department, and then delivered by Santa’s helpers to each child’s home the week prior to Christmas. On the day of the event, Target will provide food for the children and Santa will visit with each of them.

If you would like to learn more about the Heroes and Helpers program, know a child or family you would like to nominate, or would like to make a donation to help bring more children into this year’s program, please contact Community Relations Officer Chad McNett at 815-748-8439. They would like to get all nominations and donations lined up prior to Thanksgiving. Thank you.

Thank you so much