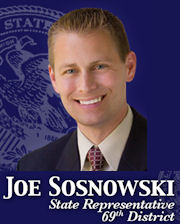 Earlier this month, the Governor gave his annual budget address before members of the General Assembly.  I was disappointed that the Governor would propose increasing spending by $500 million more than we will take in.  Our financial resources are being crowded out by our pension crisis and the Governor wants to spend more money than we will actually receive.  Only in Springfield.  You can hear more of my reaction and concerns here.

With the current economic conditions, many families and businesses have had to make tough choices to stay within a budget and live within their means. I believe Illinois should do the same. This is why I am supporting the passage of a new, effective Constitutional Amendment that will require lawmakers to pass a balanced budget that is truly balanced – or not be paid.

House Joint Resolution 32 would put more “teeth” into the state’s balanced budget requirement. It demands that within 30 days of the enactment of a budget, the Auditor General’s Office must certify that the budget will be balanced with expenses not exceeding expected revenue. If the Auditor General declares that the budget is not balanced, then the Comptroller will, stop payment for the salary of General Assembly members and Constitutional Officers. If adopted by the General Assembly, the new constitutional balanced budget amendment would then be placed on the ballot for approval by voters in 2014.

“Taxes are simply one revenue source for government. Governments have investment and enterprise income that now surpasses their tax revenues. Governments therefore are fully capable of being self-sustaining without taxation.”