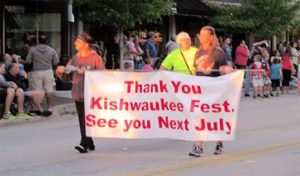 Kishwaukee Fest Parade of Parades Friday, July 26 will feature live bands, floats, pageant queens, youth groups and more. This evening parade marks the unofficial end of summer vacation and the gearing up for back to school. The 2019 version of “Parade of Parades” will feature over 90 units and is becoming a regional favored of parade goers.

The parade steps off at 7:00 p.m. on Friday. Celebrating its 10th Anniversary, the parade features a unique variety of entertainment groups. The Parade Marshall and Military Parade Marshall will be selected from local nominees. New units include antique fire trucks, a circus wagon with a working music calliope, local dance troops, service clubs, and more.

Music in the Parade includes Drums Corps, Marching Bands, Steel Drum Band, Rock Bands and Country Bands (on flat bed trucks). After the parade the olde-fashion street dance has been canceled due to construction in the downtown area.

The parade starts at Founders School on 7th street, proceeds East to Lincoln Highway, and ends on Second Street in Downtown DeKalb.

Kishwaukee Fest began in 2010 as an entertainment salute to DeKalb County, Illinois. The week-long Festival features Concerts in the Park, a Friday evening Parade, Saturday Baconpalooza Swine & Wine Festival, and a Sunday car show. In addition to the main events there are additional activities, entertainment and attractions to showcase DeKalb County. 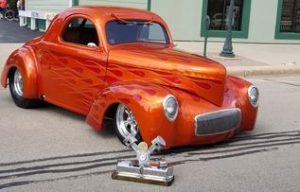 The “Turning Back Time Car Show” in Sycamore is the premiere car and motorcycle event in Northern Illinois. This show attracts more than 600 classic and muscle cars and over 400 motorcycles.

Canceled: The Baconpalooza-Swine & Wine event scheduled for Saturday, July 27 has been canceled for 2019 due to construction in the downtown area of DeKalb. The food, wine tasting, Corvette show and skateboard event will will return bigger and better than ever in 2020.

Listing of some of the remaining Summer 2019 events in DeKalb County: