After two years of construction (didn’t it seem longer than that?) and $36 million dollars, the new DeKalb County Jail can now accommodate 140 inmates, with room to add an additional 60 beds, if necessary. The county landfill expansion is generating enough extra revenue to pay off the bonds used to finance the jail, at the cost of 500 more tons of trash being dumped at the site every day.

One of the major complaints that I’ve noticed over the last several years is that violent criminals and sexual offenders in DeKalb County are released on bail almost immediately after they are arrested. Part of the reason for that, I assume, has been the lack of space in the County Jail. In theory, this expansion should help with that issue.

I guess it’s good to now be able to accommodate more inmates in the county jail, but it’s hard to get too excited about more prisoners and more garbage.

It’s always nice to see money being allocated by Illinois government to improve the infrastructure of the state’s fourth-largest public university. Anyone who has worked at or attended the university knows that the heating system is antiquated and can definitely use the upgrade. 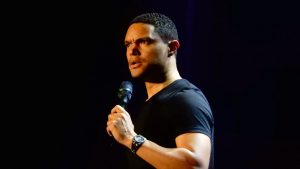 The South African comedian from “The Daily Show” will perform at the Convocation Center on November 10. Tickets go on sale for the general public this Friday. Noah, who took over for Jon Stewart on “The Daily Show” in 2015, has developed an avid following, especially among younger audiences. He also authored a bestselling book, titled “Born a Crime: Stories from a South African Childhood,” in which he talks about the struggles of growing up in South Africa with a black mother and a white father, during a time when such a mixed-race relationship was a crime punishable by law in that country. He is a popular performer on college campuses, making stops at Kansas State University, the University of Massachusetts and Penn State in September and October, before coming to NIU in November.