Lynn Allen Fazekas is the new City Clerk for DeKalb, Illinois following a seven to one approval at the DeKalb City Council meeting Monday, August 13th. Ms. Fazekas was sworn in by Ruth Scott, Mayor Jerry Smith andy other members of the DeKalb City staff. She was endorsed by Mayor Smith as the best candidate to fill such an important position in the city of DeKalb. 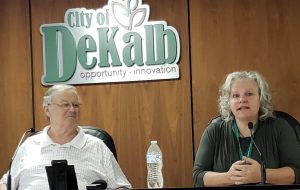