Observations from the lobby of the Egyptian Theater on Candidate Night

The meet and greet session of a local candidate night forum is golden. Shake hands with the candidate and ask them point blank about an issue important to you. Listen. Then in the voting booth you’re filling in the ovals with a purpose all your own.

Roger Scott is running unopposed for Sheriff. He usually does because a large majority of voters thinks he does a good job.

But he’s no closer to starting construction on a new jail than he was a decade plus ago. That was the impression I got from listening to him at his table on Candidate Night.

But the landfill’s been approved and the trucks are rolling — sell the bonds and collect the tipping fees.

“Well, now there is a lawsuit over the gas tax thing,” said Scott. “They’re worrying about losing that revenue.”

He said he was working with others to downscale the project if that was the direction ordered.

Maybe some of the board members were thinking of other ways to spend those tipping fees.

“Of course I would oppose that,” retorted Scott. 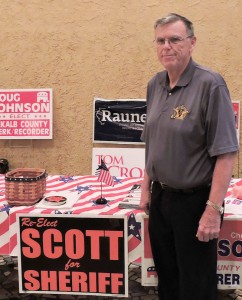 Is jail the wrong description for the facility? Scott acknowledged that the current jail is now serving a growing population with mental health issues in addition to the criminally charged and convicted prisoners the current jail was built for. That’s not a safe mix in general population. Segregation in groups is near impossible. Solitary confinement is difficult and at times not advised. Accommodations for outside support staff from social services were not designed into the current building. Public safety building is perhaps more descriptive.

Scott might have to take this to the voters in a referendum. Abate the debt bond obligations with tipping fees. That’s what people were told in justification of the landfill expansion approval. Would he do that?

“It might come to that,” said Scott, “but a referendum is so hard because tax dollars can’t support it so you have to have a committee of citizens formed before you even get started.”

A considerate board might consider asking voter approval to spend those fees for other projects. A no vote to a public safety building abated by the tipping fees should be required.

I didn’t ask him about the alleged special investigation on his alleged handing out his campaign literature from a booth marked as his official office at a senior fair. His challenger Trent Taylor didn’t ask about it either. Johnson certainly didn’t mention it. It must not be that important. This is Illinois, I guess.

Irony of ironies. When moderator Eric Olson asked the county board candidates what they would do to keep the air safe around the landfill in Cortland I thought he did a good job of asking a pointless question. What else could the answer be except to work with Waste Management and the EPA?

Well, it turns out someone better be working with Waste Management and the EPA right now. According to Clean Air for Cortland people have been reporting a really strong, really bad odor coming from the landfill again. When we shared their post on our Facebook page confirmation comments immediately came in. it seems people are smelling it from Hinckley to the subdivisions behind the Jewels store on Sycamore Road.

Those who smell the odor should report it on this EPA Odor Complaint Form so we can work together with Waste Management and the EPA to get a solution to this potential safety risk. Especially when children are at stake.