We have also embedded videos from the event. 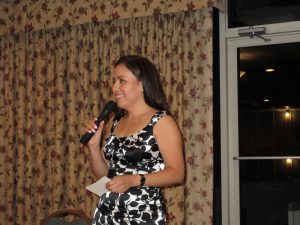 She is 30 years old and lives in Sycamore. Her grandparents were farmers and they taught her to have respect, discipline and to work hard. Both of her parents are working-class people.

She loves science and foreign languages. She speaks English and Spanish. She studied Japanese and taught herself to read Korean and Portuguese. She is currently learning Hebrew and how to speak Portuguese as well.

She was inspired to run for office by a story she read about young women being able to make a difference, too. She wants to be a voice for young people, whom she feels are not adequately represented in government.

Her bachelor’s degree is in Industrial Engineering and she’s currently working on a master’s degree in Supply Chain Management and Logistics. She’s worked in manufacturing as a production planner, buyer and quality engineer. She’s worked with both union and non-union employees. She loves people and is able to get along with people from all backgrounds.

She wants to use her industrial engineering knowledge to improve processes in the Treasurer’s Office so they can do more with less. She will use her supply chain management experience to perform strategic use of resources and facilitate cash flow and movement of services. She will also use her experience in quality and auditing to evaluate any risks in the office.

“It’s not about being in charge. It’s about taking care of those in our charge.” She believes that quote summarizes what her campaign stands for. 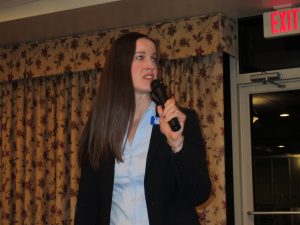 She’s a combat-decorated veteran with 13 years of experience leading up to 140 marines. She’s also the founder of a 501(c)(3) charity that takes donated clothes and redistributes them for free in the community. She is also a mother of four children and a student at NIU, studying Economics. She is hoping to finish her undergraduate degree next year.

The last position she held in the Marines was as a Future Operations and Planning Manager for a company-sized unit. She loved it and was passionate about seeing every operation through from start to finish and coordinating all of the elements that were required to make that happen.

She felt like it was time for her to get more involved in her community and work toward change. Given her leadership and managerial experience, she felt like the DeKalb County Clerk & Recorder’s Office was a really good fit for that.

“I would make it my duty to ensure that the office is accessible to all county residents, and that the office operates with transparency, accountability and integrity,” said Morris.

Her three main goals for the office are to modernize, energize and revitalize. She wants to update their online and mobile platforms to make them more accessible to people. She wants to infuse the office with increased passion for service to the community. And she wants to make sure that her staff has fantastic training.

She wants to be frugal with the money the office spends and to pull in resources available within the community, such as hiring interns from NIU and collaborating with other organizations.

She is open to looking at ways of opening up general elections to more candidates, including allowing candidates to run without being a member of a party. 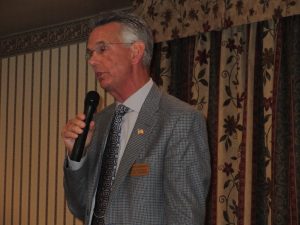 He was appointed in 2013 and elected in 2014. He was raised on a farm in Sandwich, IL. He attended Kishwaukee College. He was in the Army for three years. After he came home from the military, he farmed for a few years and met his wife, Susan. They have three adult children.

“I really enjoy working for the people of DeKalb County,” said Johnson. “I’ve enjoyed this position. I feel that my knowledge and experience in the position really helps the county.”

He listed the five major functions of the County Clerk and Recorder’s Office: 1) Clerk of the County Board and keeper of the County records 2) Chief Election Officer 3) Keeper of vital records—birth, death & marriage records 4) Compilation of property taxes and redemption of delinquent taxes 5) Maintain land records for the County.

“I will follow the law,” said Johnson. “That is one of my major points. The County Clerk’s Office cannot just do what it wants. My job is to do what the law says.”

He said he will be conservative with taxpayers’ money, when making decisions about equipment, staff and procedures.

If technology works, he will put it in place, as long as it’s secure. He believes that he has run safe, secure and trouble-free elections for all DeKalb County residents over the last five years. He instituted putting in the DeKalb Township Building early voting center to make it more convenient for DeKalb residents.

“I think my record will show that I’ve done a good job for DeKalb County,” said Johnson.

He said he’s come in under budget every year he’s been in office.

His staff works very hard and are learning new technology and new processes and he’d like to see their pay and job descriptions updated.

The law doesn’t state that you need to have a photo I.D. to vote. He said that if people have any concerns about a voter at a polling station, they can be challenged by an election official, another voter, or a poll watcher and be asked to produce a photo I.D. to prove they are who they say they are—so there are checks in place.

He often contacts Clerks from other counties to find out how they do things.