As gas prices continue to rise, you can take some solace in the fact that some young people at Northern Illinois University are designing super fuel-efficient cars that might someday allow you travel cross-country on a single tank of gas.

The 13th annual Shell Eco-Marathon Americas, took place April 3-6 at Sonoma Raceway. NIU competed against 27 other universities from North, South, and Central America, including California Polytechnic University, Milwaukee School of Engineering, the University of British Columbia, and the Federal Institute of Education, Science and Technology of São Paulo, Brazil. 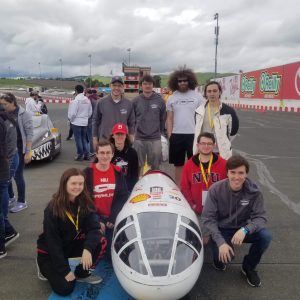 NIU’s Supermileage team earned first place in the Internal Combustion Engine Prototype category. According to the team’s website, their combustion car has an aluminum frame, a carbon fiber body, and a Briggs and Stratton Junior 206 engine.

The driver of the vehicle during the competition was Lauren Bangert, a sophomore mechanical engineering major from Dunlap, IL.

According to their website, “NIU Supermileage is operated entirely by undergraduate students from a range of years and majors and are advised by a faculty member, operating under the College of Engineering and Engineering Technology.” The team began as a senior design project and has been entering in competitions for ten years now. They were even featured in a 2016 Shell commercial with Jay Leno.

You can read more about this impressive achievement on the NIU Newsroom website: “NIU Supermileage team wins international competition”