Northern Illinois University Athletics will hold its Annual Family Fun Day this Saturday, August 19th, 2017 at Huskie Stadium with activities for all ages, free parking and admission and more. After watching the Huskies practice, fans are invited onto the field to meet the team, get autographs and mingle with the coaches, staff and players in the North End Zone beginning at approximately 4:45 p.m. The NIU Bounce House and inflatable games will be set up in the End Zone. Purchase concession items, pick up 2017 posters, and see the Jacoby Trophy, recognizing NIU as the top women’s athletics program in the Mid-American Conference. 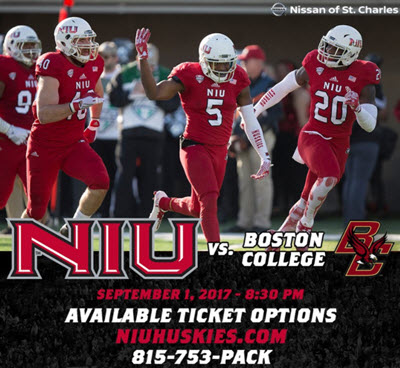 Fans, families and alumni are all invited to enjoy an afternoon with the Huskies less than two weeks before the team takes on Boston College in the 2017 season opener on September 1 at Huskie Stadium. The opening game, which kicks off at 8:30 p.m. on Friday, Sept. 1, marks the first visit by an Atlantic Coast Conference team to DeKalb since 2003, when the Huskies defeated Maryland in a historic season-opening win. The Boston College game will be NIU’s “Black Out” game with all fans encouraged to wear Black and help the Huskies #BlackOutBC.