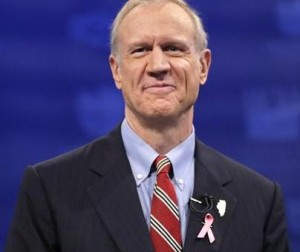 On Thursday, October 29, Illinois Gov. Bruce Rauner is scheduled to appear at the Holmes Student Center on NIU’s DeKalb campus. Rauner will be the keynote speaker at the DeKalb County Economic Development Corporation’s annual dinner and State of the County program, scheduled from 5 to 8:30 p.m. in the Duke Ellington Ballroom, inside the student center. Tickets are required for admission to the event.

According to the NIU Alumni Newsletter, NIU students, led by the NIU Student Association, plan to rally in the Martin Luther King Jr. Commons, the public area directly outside the Holmes Student Center, beginning at 4:30 p.m. Thursday. The Student Association has invited students from other colleges and universities in the region, including Northeastern, DePaul, and Kishwaukee, to join them. The rally is scheduled to include a voter registration drive and petition drive, and state legislators have been invited to attend and meet with those attending the rally.

The NIU Alumni Association invites alumni to attend the rally as well in a show of support for NIU.

Poor choice of wording, are you actually college graduates?!? You’d be amazed at the domino affect of how many people are pushing buttons in politics thus the blame game, we each need to do our part too.

So that means more traffic…great ð

Why would he his tax return says it all

What a waste of time and at the taxpayers expense. Notice it’s all about Niu and not illinois in general. He was a joke to begin with but all bought into the Bullshit fight of Republicans vs Democrats. I don’t care if your a daycare provider if you could get this state moving in the right direction, I’d vote for you. For our own sake people need to base voting on track record and not empty promises and lies. So you all enjoy this giant waste of time. HE DON’T CARE ABOUT ANY OF US

Why would anyone other than Big Business rally around this douche?

Tell him and the other politicians to pull their heads out of their asses and get a budget figured out. I’m tired of being behind on my bills waiting for them. My wife’s work has been between 8-12 weeks behind paying her because of them. We struggle while those worthless pieces of shit get paid for not doing their job. REPUBLICANS AND DEMOCRATS SUCK!!!! Give me 5 minutes with him!!!!!!!!!