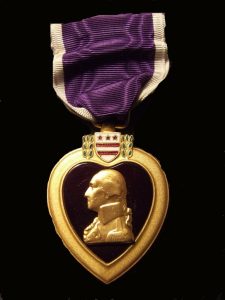 December 7, 1941:  Captain Annie Fox receives the first Purple Heart awarded to a woman for her service while under attack at Pearl Harbor.

The Purple Heart is a U.S. military decoration awarded in the name of the President to those who have been wounded or killed while serving on or after April 5, 1917.  Captain Annie Fox was the chief nurse on duty when Pearl Harbor was attacked.  She was awarded for performing her duties and administering anaesthesia to patients during the heaviest part of the bombardment, dressing the wounded, and acting as a perfect example of calmness, courage, and leadership.