Mark Pietrowski’s effort to champion Paul Stoddard’s choice for the recently redistricted county board map pricked my curiosity. There were hints of local Republican gerrymandering and even admission by some local Democrats that they — well, maybe not our local non-partisan Dems but those at the “state-level” — did an embarrassing job of partisan redistricting of the state map.

Most exciting to me was learning of the fact that because of the redistricting all 24 of the county board seats are up for re-election in the 2012 election cycle. Now that could bring change especially if the current incumbents don’t quit listening to the appointed staff more than they do their electors.

Then there was Sycamore’s announcement that it was going to reapportion its ward boundaries. They tend to do things proactively in the county seat city. That allows more time for public input.

But that made me wonder are other communities required to reapportion their ward boundaries? If so should the new wards be compact with near equalized population? And if so, when?

Those questions required reading of state statutes that are worded like a conditional script for a database. So, I don’t have definitive answers to my questions, yet. The research continues. But if laws were common sense then, based on population trends from 2000 to 2010, several DeKalb County communities should reapportion their ward maps.

If so, when? According to DeKalb County Clerk, John Acardo, filing for the next municipal election wouldn’t be until December 2012, for the April 2013 Elections. 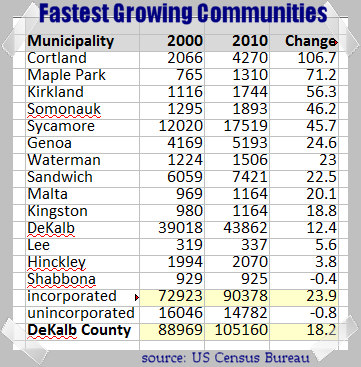 The town of Cortland more than doubled its population from the 2000 census to the 2010 census (from 2066 to 4270). Moderate growth was realized in Kirkland. Somonauk and Sycamore. Mild growth occurred in Genoa, Waterman, Sandwich, Somonauk and Kingston. In terms of percentage of county population; DeKalb, Lee, Hinckley and Shabbona experienced negative growth.

An intriguing trend occurred in DeKalb. County board District 7 was the only district to experience a population decline. From 2000 to 2010 the district lost near 800 people in the population count. District 7 contains the city’s 1, 2, 7, 8, 10, 16 and 35th precincts. Those precincts, for the most part, are NIU student and staff dominated. Enrollment decline? Staff exodus?

In either event DeKalb needs to reapportion its ward boundaries. Sooner rather than later would invite and allow more public input into the process. 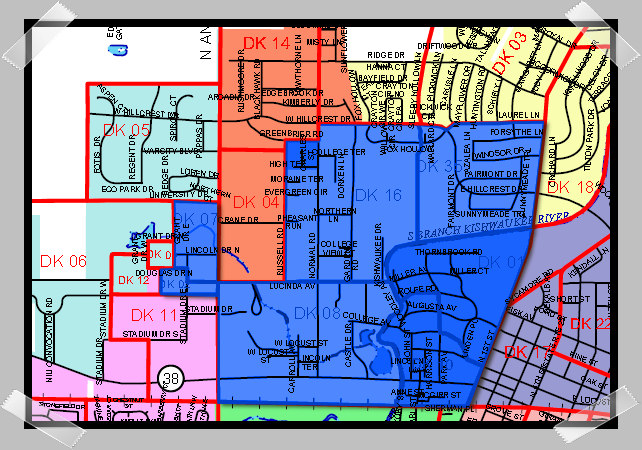 I’m no fan of at large either. Just mentioning some topics that have been percolating for a while.

Real question is on uneven, dramatically uneven turnout in the different wards. Question Mac has raised.

Is there a way of being consistent with one person one vote and having reasonably compact wards, yet, having them set up so the numbers that actually vote in each ward are not so far out whack?

.It does bother me that some council people are elected with but a handful of votes, while others require several thousand votes.

I recognize solutions that are both fair and legal are tough, to come by.

Having at large aldermen would be completely stupid with DeKalb’s population today, even if it is smaller than a couple of years ago. Having at large aldermen means campaigning would have to be like campaigning for mayor, and the associated campaigning costs. If anyone wants only the people with deep pockets to have the best chances of getting elected to public office for what should be a local office, representing local people living in local neighborhoods, by all means, switch to aldermen at large. Campaigning is not like it used to be, when DeKalb had at large aldermen–it is far more expensive.

An at large alderman would have to represent a significant number of people, and that would be a lot more work than a ward alderman. He or she might earn his or her pay, or end up representing too many people, having to be familiar with all of the neighborhoods for the whole city, and thus not be able to serve anybody well due to an increased work load. That might have worked decades ago when DeKalb was smaller but not today.

Well, the precincts are going to change, no matter what the City of DeKalb does (or does not do).

I’ve engaged some council members and mayor on this topic. Promise is that it will be raised as soon as the budget discussions are completed

1. A technical one: has population shift been sufficient to require a remapping of present wards to eliminate some odd shapes? If so, some action is needed

2. Political question: Is this the time to talk about changing the number of wards, having some at large etc. elections, so that wards are set up that do have approximately an equal number of voters, but are also set up so that turnouts in each ward are not so disparate

I don’t know how I stand on ‘2’ yet, but raising the issue when redistricting might be needed seems the appropriate time

I’ll have a more statful answer to the first question later but redistricting does require adherence to the state and federal constitution. Equal population distribution between wards, compactness are keywords for compliance. Population distribution has long been disparate in DeKalb wards, namely the 2nd Ward is so much larger than the others.

I agree it is the appropriate time and opportunity to address the voter turnout factor in municipal elections. Some changes, such as at-large aldermen, might require voter approval. We shouldn’t let referendum questions distract from the once in a decade opportunity to achieve population distribution equality.

Sycamore is set to approve its new ward boundaries, according to this report by Caitlin Mullen of the Daily Chronicle.

DeKalb must reapportion its wards by October 1, 2012.