October has been designated the time for high school seniors to begin making applications for the next step in their career preparation. High schools and other organizations will be hosting over 350 events and activities regarding financial aid and college admissions in the next few months.
Burlington Central and Sycamore are among over 130 high schools around the state that have signed up to host college application events during October. Kishwaukee College will be hosting FAFSA application nights in January and February. FAFSA (Free Application for Federal Student Aid) is the first step in applying for federal, state or college-provided financial aid. In addition, the Illinois Student Assistance Commission (ISAC) will be part of a college fair at Northern Illinois University in March.
The college application process can be confusing and the idea of paying for a college education can be intimidating, but services are available to help. ISAC was created in 1957 to help students achieve their higher education dreams, regardless of financial status. It has a near-peer mentoring program with recent college graduates who come to high schools to offer advice. It also offers information about college costs, compares colleges, and much more at its website: www.ISAC.org.

I recently had the opportunity to attend Complete College America’s annual conference and hear some of the best practices to increase graduation rates at colleges and universities. The practices not only significantly increase the number of students passing their first courses but also the number of students graduating in the expected 2 or 4 years.
Colleges and universities from across the country reported on their student success after incorporating one or more of the five research based higher education “game changers.” In every case the reporting institutions first clearly stated their focus was to increase student completion. Strategies to accomplish this included co-requisite remediation courses, encouraging students to carry 15 or more credit hours per semester so they complete on time, and structured class schedules especially for working students. Other strategies included guided pathways to graduation and mentoring that included early warning for variation from the path to graduation on time. 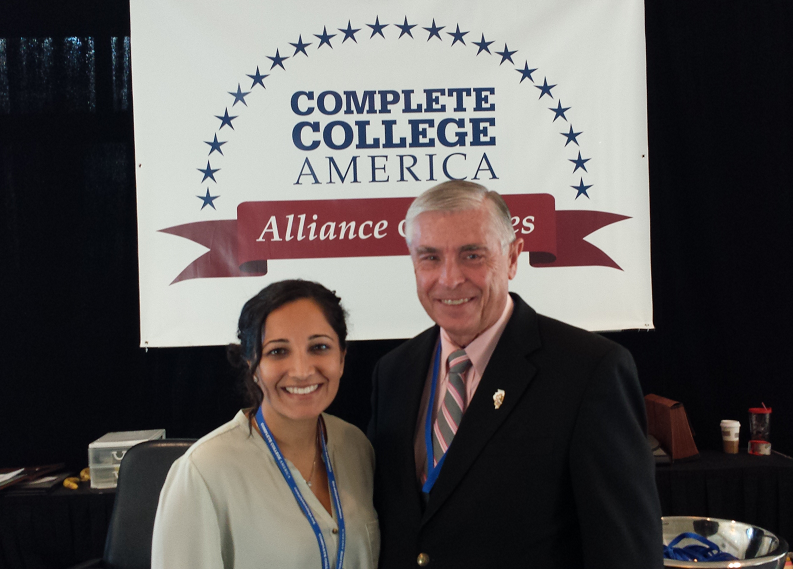 Illinois is one of 33 states that have joined Complete College America’s Alliance of States taking bold actions to significantly increase the number of adults successfully completing some certificate or degree after high school. The focus is on achieving degrees and credentials with value in the labor market and closing attainment gaps for traditionally underrepresented students.

While nearly 90 percent of state programs are being funded without a state budget, those groups and individuals in the remaining 10 percent are feeling the consequences. Now a third of the way into the budget year, the 10 percent group has used any reserves they may have had and are being forced to cut back their services or close their programs.
In most cases the ones being cut are not the ones a rationale person would choose to cut if the state spending was prioritized to the most vulnerable and valued programs.
Several colleges and universities who allowed students to attend classes this fall without the money from their state supported Monetary Assistance Program (MAP) have decided the students must pay their full tuitions next semester. Undoubtedly numerous students may have to drop out of school without the MAP funding. In addition, at least one college has indicated it will close its adult education program to help students attain their general education degrees(GEDs) because of the lack of a state budget.
We are also hearing more about the mental health services, meals-on-wheels and other support programs for seniors that have been cut due to no budget. Another impact in higher education is the loss of students and key faculty since institutions are not receiving state support. Presidents of the state’s nine public universities recently wrote a joint letter to the Governor and legislative leaders pointing out that many of their students and faculty are questioning whether they can afford school and whether Illinois is the best place to teach. These institutions are economic engines around the state that together have an estimated $28 billion economic impact upon the state each year through their graduates and research.
Calls to my office ask “how long can we continue with no budget or priority to what is being spent?” My answer is when legislative leaders and the Governor agree to compromise and allow our legislative budget process to work.
I believe citizen pressure on legislators to in turn pressure their leaders continues to be the only solution to the current budget gridlock. Calls, letters, e-mails, letters to the editor, and face-to-face discussions hold the key in my view.
Then too we must also be willing to set priorities, cut spending, make reforms and, yes, pay extra taxes as long as it will be used to pay our debts and highest priority programs. President Kennedy once said, “Ask not what your country can do for you, but what you can do for your country.” It’s time we all ask that question in Illinois.

State Comptroller Leslie Munger announced last week that the state would not be able to pay its $560 million pension payment for November. The statement had been expected since the automatic payment of money into state-managed pension funds is not required by any of the court orders affecting state spending. However, pension payments out of the same funds are protected by court orders and case law.
Even with this action the state’s list of unpaid bills is expected to grow from the current $6.9 billion backlog to $8.5 billion by the end of December.
The Comptroller stated that payments to pension beneficiaries will be made on schedule by selling pension fund assets and utilizing investment capital. These actions will eventually deplete the retirement accounts and mean pensions will not be able to be paid without annual state appropriations of over $1.6 billion.

Illinois Secretary of State Jesse White announced recently that, as a result of the budget impasse, his office will suspend mailing out vehicle registration renewal reminders to the public. White said that suspending this service will save approximately $450,000 per month and allow his office to prolong the ability to mail vehicle registration renewal stickers, titles and license plates to vehicle owners for a few months longer before the postage account is depleted.
The Secretary of State’s office has created an electronic notification process to replace the mailed forms. Those who sign up for an electronic notification can complete their renewal on-line; everyone else will have to renew their vehicle license in person at the state driver’s license office. Failing to renew on time will probably result in a citation from a police officer.
To sign-up for the electronic notices, go to the Secretary of State’s website and type in the registration and pin numbers located on your current vehicle Registration Identification Card.

In an effort to cut state operating and building maintenance costs, the Governor has started the process to sell the James R Thompson Center, the seat of state government in Chicago. The building, constructed in 1985 and named after the governor at the time, is a unique architectural structure featuring a large glass atrium and offices for several state agencies and all constitutional officers. Employees could be relocated to existing offices in Chicago and Springfield.
House Bill 4303 has been introduced to start the lengthy process to sell a state building. Former Governor Blagojevich also proposed selling the Thompson Center, but his intentions were to expand state spending not reduce them. 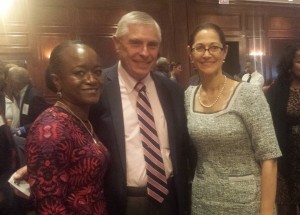 City Colleges of Chicago and ComEd recently celebrated a 10 year partnership to train people for good paying jobs in the electrical transmission field. Shown with me are Chancellor Cheryl Hyman(left) and ComEd President Anne Pramaggiore(right). The program, conducted at Kennedy King College in Chicago, attracts people from Northern Illinois and many low-income neighborhoods of Chicago for an intensive 6 month training and employment at graduation. 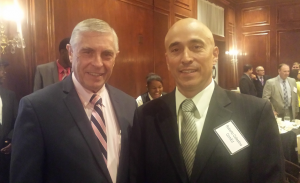 Roberto Celestino, Sycamore, was one of the graduates of the Dawson Technical Overhead Electrical Line program who was recognized at a special luncheon in Chicago. He is employed by ComEd and working toward additional training in this well-paid career path.

The House is back in session this week for the first time in almost a month. Action is expected on several pieces of legislation and subject matter hearings. Legislation on waivers for K-12 school mandates and spending for certain programs will be heard in committee on Tuesday morning.
Bob Pritchard
District Office 815-748-3494 or E-Mail to bob@pritchardstaterep.com
http://www.pritchardstaterep.org/

I did know that.