The Speaker sent a clear message that not a lot would be accomplished in the first week of Veto Session by canceling one of the session days.  Most of the time was spent in committee hearings to set up legislative action when the General Assembly returns on November 4.

Large rallies were held by both proponents and opponents of the Marriage Equality Act last week.  I appreciate constituents coming to Springfield to express their views and try to gain legislator support for their position.  A vote on this issue and on pension reform is not expected in veto session.

Deputy Director of Central Management Services (CMS) Janice Bonneville appeared at the hearing to explain the new plan and counter concerns that retirees would lose access to their doctors or see diminished benefits.  The changes to the retired state worker healthcare were negotiated between the governor and the state’s largest union representing state workers-the American Federation of State, County and Municipal Employees (AFSCME)-to reduce costs of the plan.

While Bonneville said retirees will be receiving information about the healthcare changes in the mail over the next 10 days, I have scheduled an informational meeting for retired state workers to get answers to their questions from CMS staff.  The meeting will be at the Holmes Student Center at Northern Illinois University on November 18.  Sessions will be held at 9:30 a.m. and repeated at 1:30 p.m.

Under the new benefit plan, retirees and any dependents that are eligible for Medicare will be encouraged to sign-up for the managed care product called Medicare Advantage.  If a retiree or their dependent is not Medicare eligible, they will stay under their current health plan.  The Medicare Advantage plan uses a third party to manage the program, pay bills to the provider and encourage patient wellness.  Under the PPO option, patients can see any provider who accepts Medicare.

The new Medicare Advantage plans will go into effect February 1, 2014, and provide medical, hospital and prescription drug coverage.  Dental, vision, and life insurance benefits are not changing; however, retirees must enroll in one of the State-sponsored Medicare Advantage plans in order to keep access to their existing vision and dental benefits.

According to testimony, public colleges and universities have been successful in improving student retention and progress toward a degree including minority, first generation and low-income students.  One has to question how institutions have met another of the goals for an affordable education.  (See chart.) 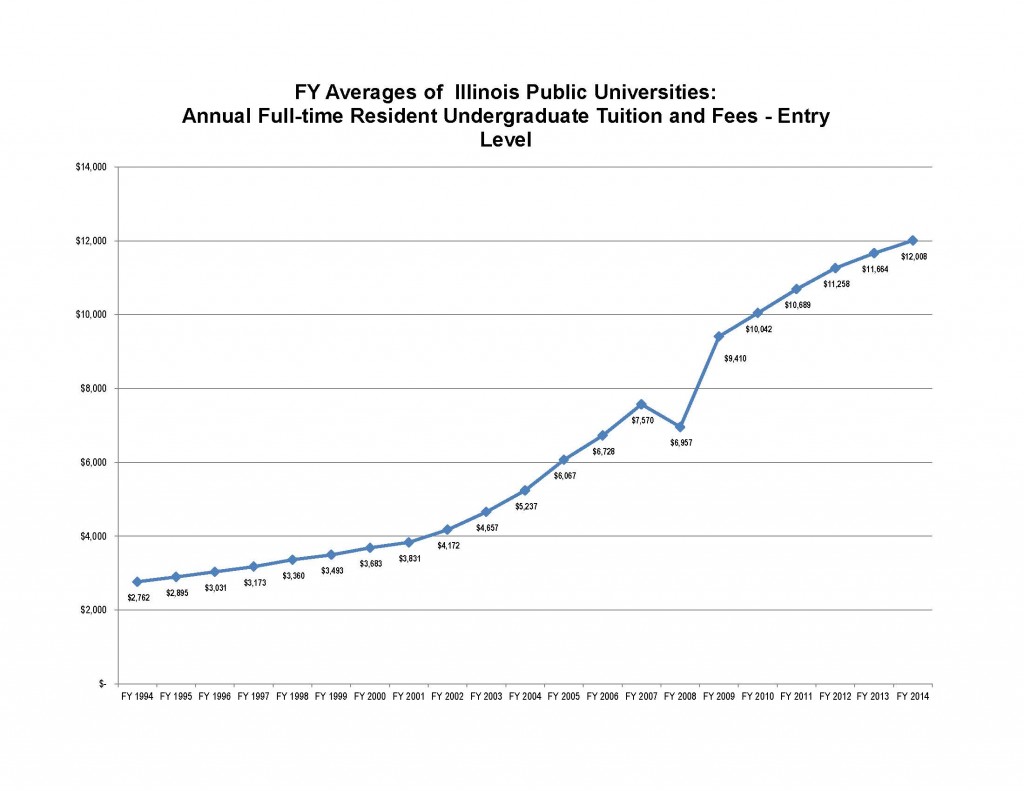 Most states that use performance based funding provide increased funding for those institutions that meet the goals.  Illinois, with its poor fiscal condition, chose to withhold a small amount of funds from institutions and then let them earn back the funding if they met the complex formula for measuring results.

It’s not surprising then that several of the comments at the hearing stated few institutions have shifted many resources to achieve better results.  They also feel additional funding is necessary to make faster progress toward the goals.

The idea behind performance funding is still valid, but I feel Illinois must invest new dollars to incentivize best practices at the universities and colleges. 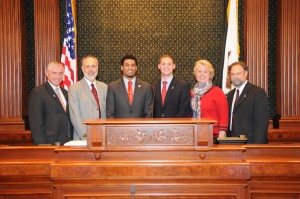 Last week Doug Baker had his first opportunity to visit with legislators in Springfield after being named Northern Illinois University President.  Baker brought with him two students during his visit– Jack Barry Student Association President and Steffen Canino, member of the CHANCE program.

Barry came to observe the inner workings of the legislative body and look for ideas he could use in his student government leadership.  Canino had a different mission.  His goal was to remind legislators about the importance of Monetary Assistance Program (MAP) funding for low income students.  In just the past decade, funding for the MAP program has gone from awarding grants to every qualified student to now meeting less than half the student need.

While Baker supported the goals of both students he also came to court the legislature for investment in higher education.  Over the past decade, state funding of public higher education has been cut by over $270 million and NIU funding is at 1990s levels while state mandates have increased the cost of running a modern university.

The 1963 team gathered for Homecoming a few weeks ago as a plaque in their honor was unveiled south of the stadium.  The team and quarterback George Bork rewrote the record books for college football including being the first quarterback to compile 3,000 passing yards in a single season.  You can read the resolution here.

Concealed Carry Signage Approved
With the Illinois concealed carry firearm law about to take effect, the Illinois State Police have announced signage requirements for prohibited areas.  Owners of any statutorily prohibited area or private property where the owner prohibits the carrying of firearms must clearly and conspicuously post the Illinois State Police approved sign at the entrance of the building or premises.  If owners wish to post a larger sign they are welcome to do so.

Town Hall Meeting October 30
Come and discuss state issues with Representative Tom Demmer and me on Wednesday October 30, 6 p.m., at the DeKalb City Hall.  Tom and I each represent part of the City of DeKalb and want to exchange information about issues as well as hear your comments for solutions.  See you Wednesday.