As the legislature met in session last week to consider the Governor’s 33 vetoes to legislation, it also passed a number of noncontroversial bills on their way to become law. While the Senate over-rode the vetoes in a number of cases, the House failed to over-ride four of the bills it considered.
The veto to House Bill 4351 was sustained because it would restrict the state’s flexibility in assessing and serving Illinois’ elderly and physically disabled residents. As the number of older residents grows, the bill would have locked methods of caring for them into statute that would prevent the state from making any changes or ways to manage cost of these programs.
HB5104 dies because the House failed to over-ride the Governor’s amendatory language. The bill would have ignored an agreement regarding the number of nurses at the Department of Corrections.
The veto to HB5931 was sustained because of its $330 million cost impact and no way to pay for it. The bill would have raised the minimum wage for direct support personnel for people with intellectual and developmental disabilities to $15 per hour.
HB6299 also died when the House failed to over-ride the veto. The bill would have imposed mandates on how a school district manages its employees and their benefits.
A number of non-controversial bills passed by the Senate in the spring were approved in the House last week. Among them were bills dealing with extending the medical practice act, mercury switch recycling, out-of-state teacher licensing, tax credits for affordable housing, licensure of boiler repairers and extending the insurance code. Another bill dealt with the valuation for property taxes on farmland grass filter strips.
The General Assembly will convene again on November 29 for the final veto session.

The state labor relations board ruled last week that contract talks between the Rauner administration and AFSCME, the state’s largest public employee union, are officially at an impasse. The ruling allows the governor to implement the contract terms of his last, final, and best offer to the union. The union has appealed the decision in court.
As a result of the labor board decision, the governor announced plans for state employee merit pay and extending the work week to 40 hours (previously 37.5) before overtime is paid. These moves more closely mirror federal law and contracts covering other union workers.
The merit pay plan will be slowly rolled out, beginning with offering a $1000 bonus to employees who missed less than 5 percent of their assigned work days from July 1, 2015, to June 30, 2016. Vacation, personal and sick days are not considered assigned work days. In the future, “the state will consult with AFSCME in developing a fair performance criteria to evaluate and reward employees based on specific achievements including attendance and compliance with work rules,” according to a spokesman for the Governor.
Governor Rauner also announced that April 22 will be the state’s first annual State Day of Service to provide additional services at no cost to taxpayers. Volunteers will have an opportunity to give back and help their fellow Illinois residents. On the State Day of Service, groups and individuals will be able to come together across the state to assist state agencies through activities like cleaning up state parks, working on projects at the state fairgrounds or even volunteering at the state’s veteran homes.

State to Get New Plates

Secretary of State Jesse White unveiled redesigned Illinois vehicle license plates that are more reflective and safer. The current plates are being replaced because of a manufacturer’s error that causes plates to lose their luster and rust. As the license plates’ reflectivity diminishes with age, it also impacts law enforcement’s ability to quickly and accurately identify license plate numbers.
The plates will be provided to drivers free of charge. The Secretary of State’s office will begin mailing new plates in January starting with the oldest plates and gradually replacing all the plates in circulation at an expected cost of $5 million a year.
Vehicle owners will be notified by mail when they qualify for the new plates. Motorists who can’t wait for their turn at a replacement may request a new license plate at www.cyberdriveillinois.com and pay a $29 fee.

A Conversation with NIU Students 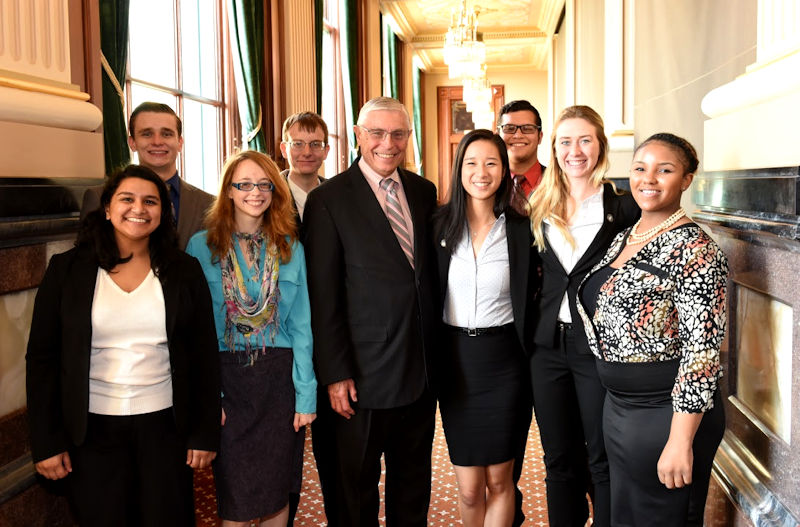 NIU students lead by Student Senate Speaker Christine Wang (center) came to Springfield last week to share the impact of state funding cuts to higher education. They told personal stories about their struggles to pay for college and about some high school friends who chose to attend college out-of-state where costs were lower. Over a third of NIU undergraduates depend upon state Monetary Award Program assistance to pay their tuition and fees but there is no certainty that these state grants will be paid.
I will continue to be a strong advocate for higher education and its funding as I believe it is the best way to grow our skilled workforce, foster innovation and new companies, and keep our next generation of students here in Illinois. Studies conclude that students who leave the state to attend college are much less likely to return to Illinois for a job.
The students’ visit was an opportunity to explain my views of the reasons funding has been cut for higher education and offer a pathway to breaking the budget gridlock. As they visited with legislators, I encouraged the students to urge legislators to pressure their leaders to negotiate for a full-year balanced budget and ways to grow the economy. This is a message everyone can be delivering to their legislators.
The governor is calling for regular meetings with legislative leaders to find solutions but, amazingly, the Speaker of the House does not want to attend or negotiate. He fails to understand that the legislature is hurting our job climate, college students and its citizens–not protecting them–by refusing to change the direction of our state.

Incomes of Departing Citizens a Major Loss
As if the number of college students leaving the state was not a serious enough concern, the adults moving out have average incomes much higher than those immigrating. Data from the Internal Revenue Service was recently analyzed for the income earning ability of those leaving the state and those moving here. 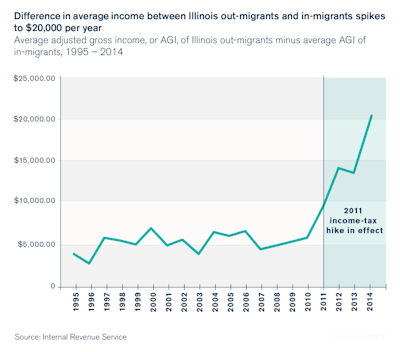 Average adjusted gross incomes of those leaving were $20,000 more than the people moving to Illinois. That disparity is considerably larger in Illinois than in any other state. This trend spiked after the 2011 temporary tax-hike but other factors like the state’s level of borrowing and unpaid bills combined with companies moving jobs out of state contribute to the negative attitudes about Illinois.
In FY2014, Illinois lost 26,000 tax returns with taxable incomes totaling $3.4 billion. Nearly 95,000 more people left the state than came to Illinois that year. As demand for state services to help the needy and vulnerable remains stable or grows, Illinois residents will have to pay more taxes unless we can increase the number of jobs.

The Commission on Government Forecasting and Accountability (COGFA) updated the legislature on the state’s liability for employee pensions last week and the numbers were breath-taking. In their November 2016 publication, “Special Pension Briefing,” COGFA estimated the unfunded liability for the five state-managed pension funds grew 17 percent in the past year to a total of $129.8 billion.
The bleak report is, in part, because two of the state’s largest pension funds lowered their assumed rates-of-return on investments which increased the state’s liability to make contributions. Stock market returns have been significantly lower than the assumed rates for many years.

The energy bill I mentioned last week was filed as Senate Bill 1585 and quickly passed out of committee despite ongoing negotiations to remove opposition. The current bill includes subsidies for two Exelon-owned nuclear plants and Dynegy-owned coal fired plants in southern Illinois as well as new rate structures, energy-efficiency requirements and investments in renewable energy. The potential impact on consumers remains the main source of opposition to the bill.
Advocates explain the bill must be approved by both chambers next week to avoid beginning the process of closing the two nuclear plants at the end of the year. Major parties met over the weekend to hammer out more details and find more common ground. Any changes or amendments to the bill must go back through the committee.

The historic 100th General Assembly is scheduled to be sworn in at noon on Wednesday January 11th at the University of Illinois Springfield campus. If you would like to join me for the festivities, please contact my office at (815) 748-3494.
In addition to a reception prior to the ceremony, I will be providing lunch for all those who wish to attend and a special tour of the capitol. Space is limited so please call as soon as possible.

Thanksgiving Day has been celebrated in this country since its earliest days, but was formally declared a holiday by Abraham Lincoln in 1863. It is a day to celebrate the food harvest and our many blessings “from our beneficent father who dwelleth in the heavens.” This Thanksgiving, I am reminded of the many blessings I have seen throughout the district, such as the bountiful crop yields and the efforts of many of our neighbors to help those in need.
I’m also grateful for our educational system that brightens the future of America’s youth. Additionally, I’m thankful for the privilege to be your voice in Springfield working to find common ground on the many issues facing our state. Of course, America and Illinois are at an uncertain place in time, but we have a lot to be thankful for when we sit down for this Thanksgiving dinner.
Have an enjoyable day recounting your blessings.