575 Illinois high schools are enrolled in the Illinois High School Association boy’s football program, but only 256 of them end up qualifying for playoff berths toward state championships.  Schools are divided into eight classifications depending on their enrollments, from 1A to 8A, with 32 teams in each classification bracket.
The first round of the playoffs began this past weekend with mixed results for area teams.  In 5A play DeKalb out-scored Hampshire, and Kaneland edged out North Boone in an exciting final few minutes.  In 6A competition, Nazareth Academy bea tSycamore and Woodstock outscored Belvidere.  And in 4A play, Chicago Phillips ended Genoa Kingston’s season.
After a series of elimination games, the final eight playoff games to determine the champions of each class will be played at NIU’s Huskie Stadium on Friday and Saturday, November 27-28.  If you would like to join me and help staff the hospitality team for the games, volunteer at the DeKalb County Convention and Visitors’ Bureau 815-756-1336.

DeKalb County and Sycamore have benefited from three grants funded by ComEd in partnership with Openlands and the Clean Energy Community Foundation.  The first grant announced last week awards $10,000 to the DeKalb County Forest Preserve to continue the walking/bike path from Genoa to Kingston (shown on left).  Genoa won a grant from the same fund last year to start the path from Genoa to Russell Woods Forest Preserve.  The additional grant will continue the path to Pleasant Hills Road and one final grant would complete the path to Kingston.
Sycamore will receive money to connect the Peace Road Trail extension from the South Prairie Elementary School to the main trail next to Peace Road.  This new connecting trail will allow safer access to the trail north of Prairie Drive on Peace Road, increasing the enjoyment of all who use the trail.
DeKalb County also received another grant for the second year in a row to preserve open space for what has become Prairie Oaks Forest Preserve along Cherry Valley Road.  This is a 50 percent matching grant from ComEd through the Clean Energy Community Foundation.  Last year the County received a $200,000 grant to purchase the first 43 acres of grassland and timber.  This year’s grant of $122,000 will help purchase an additional 40 acres.
The local share of funding comes from the Property Tax Land Acquisition Fund, but the county continues to seek grants to add to its open lands inventory rather than relying on public funds for the entire cost.  Forest Preserve volunteer Tom Robbins plans to take photos once a month over the next year with the same view at Prairie Oaks Forest Preserve to illustrate the changing seasons. Here’s one from the end of the summer:

Governor Rauner brought a message of hope and opportunity to the DeKalb County Economic Development Corporation’s annual dinner at NIU last week.  He called DeKalb County one of the best places to do business and credited the county’s agricultural and manufacturing base, rail access, higher education institutions and proximity to Chicago.
He continued his theme of recent months that Illinois needs reforms such as in workman compensation insurance and litigation, reducing state mandates and regulations, as well as bringing more local control to counties and towns.  He restated his call for nonpolitical legislative redistricting and term limits.  The Governor said he understands there will have to be compromises and even tax increases but was insistent that there has to be changes that will improve the long term outlook for Illinois.   A meeting of legislative leaders and the governor is planned for November 18.
The NIU Student Senate, faculty members and several local nonprofit organizations held a peaceful but loud rally outside the student center before the governor arrived.  A number of nearby colleges and universities sent representatives to join in speaking about the effects of the lack of a state budget for higher education and student MAP grants.
In my comments, I thanked the audience for helping bring attention to the lack of funding for many important programs.  With 90 percent of the state programs being funded, those with no budget must speak up loudly and often.  The state can’t fund everything that people want so we must focus on the most vulnerable and programs like education that help individuals improve their lives.  The audience realized that the current gridlock is caused by legislative leaders as well as the governor who must engage in compromise and find long-term fiscal solutions. 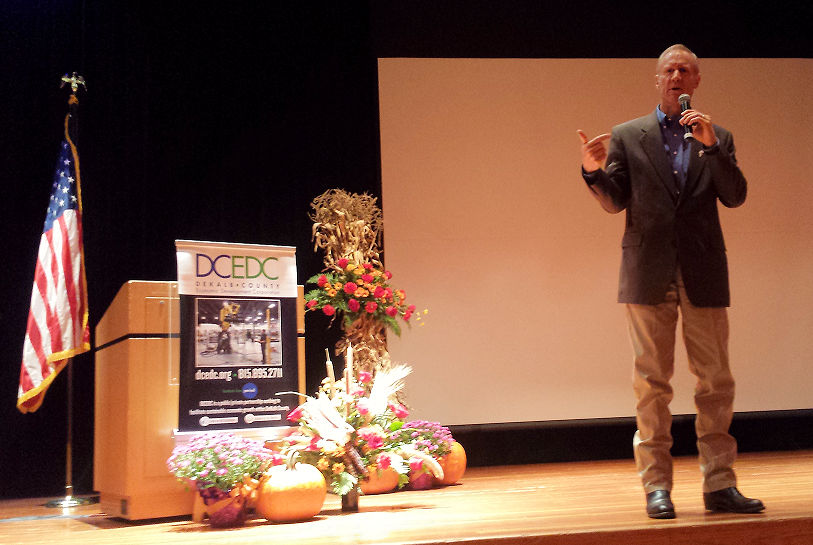 UPS has announced plans to hire 95,000 seasonal workers to help with the anticipated surge of packages during the holidays.  While the jobs are seasonal they add extra cash for the holidays and can be an entry point for those seeing full-time employment with UPS.  The hub in Rockford will add over a thousand positions and DeKalb will be adding staff.
The positions include full time package delivery drivers, full time tractor trailer drivers, part time package handlers and driver helpers.  If you are interested, you can find more information and apply at upsjobs.com.

Starting in 2016 a new law will change the design and display of specialty license plates in Illinois.  The change—HB1081 signed into law by the Governor last week—will use one design for a base metal specialty plate and then separate decals designed by the Secretary of State’s Office will be applied for each group or cause approved by the General Assembly.
As the number of approved specialty plates has increased to well over 100, law enforcement agencies have reported confusion over similar numbers on different types of plates.  Some specialty stamped-metal plates will continue to be issued such as for military service and for medals or awards.

Learn about Diabetes in November

You will be seeing a lot of messages about diabetes during November as part of a national awareness campaign.  This year’s theme “Eat Well America’, focuses on how healthy eating habits can help prevent diabetes.  Eating fiber not only helps prevent heart disease, but it can also improve your blood sugar control and support weight loss by helping you feel full instead of overeating.  Studies suggest eating whole grains can also reduce the risk for diabetes.
According to the latest statistics, 29.1 million Americans, or 9.3 percent of the population, have diabetes; 25.9 percent of those age 65 and older suffer from diabetes.  Another 86 million Americans have prediabetes and are at risk for developing type-2 diabetes.  Control of diabetes can prevent additional health concerns.  Visit:www.diabetes.org.
Bob
Bob Pritchard
District Office 815-748-3494 or E-Mail to bob@pritchardstaterep.com
Previous
Next