Legislators Fail to Act on a Budget

Veto sessions are created in the Constitution to address gubernatorial actions on bills and resolve important issues left from the spring session. With the stopgap budget set to expire on January 1 and state bills and debt mounting by the minute, nothing would seem more important for the legislature to discuss than the budget.
Instead, the legislature adjourned until January 9 without spending any time on important issues like insufficient funding for higher education and student grants, gaps left unfunded in the human service network, and the skyrocketing public pension liability.
Please join me in keeping pressure on legislators and our state’s leaders to compromise on budget issues. The election is over and this state cannot afford to go any longer without a full, balanced state budget and structural reforms to set the state on the right track for job growth. Such pressure worked to pass a temporary budget; your calls and letters now can break the gridlock.

Easier to Pass Budget in January

After the end of regularly scheduled session on May 31st, bills require a 3/5 majority–instead of a simple majority–to pass. This rule is intended to encourage passage of legislation in the spring. However, the simple majority rule returns after the start of a new year and legislative leaders have used this window to pass unpopular bills and tax increases with the help of outgoing legislators, termed “lame ducks”.
HJRCA 62 passed the House last week to put a constitutional question on the 2018 ballot that would require a supermajority to pass any revenue legislation. It passed the House, but the Senate did not have the necessary time to address the legislation. Ironically, unless the bill is voted on in the Senate during the lame duck session it won’t be on the 2018 ballot.
In addition to passing the constitutional amendment, the House also approved House Resolution 1494 that calls on legislators to oppose efforts to raise taxes during the lame duck session. Many feel that new taxes eventually will be necessary along with spending cuts to resolve the state’s fiscal hole.

Earlier this year the legislature passed a bill giving Chicago Public Schools $215 million dollars to pay the employer’s normal pension cost for 2017. The bill was negotiated with the understanding and statements on the House floor that before the funding would be released there would be agreement on reforms to the state’s public pension systems.
Since there have been no meaningful pension discussions, Governor Rauner vetoed the bill last week causing a fire-storm of complaints. Seems Senate President Cullerton and House Speaker Madigan forgot the agreement or never intended to honor it.
The Senate immediately overrode the governor’s veto, but the House failed to take up the issue so the bill dies. We cannot continue to spend over a quarter of our general revenue on pension payments.
Another bill that may point the way to pension reform passed the House and is awaiting action in the Senate. SB2437 creates a tier 3 pension for Chicago municipal workers and laborers. New hires after January 1 will contribute another 3 percent of salary (11.5 percent total) into the pension fund and would be eligible for a pension at age 65. Those hired between 2011 and 2016 could choose to pay 8.5 percent and retire at age 67, or pay 11.5 percent and retire at age 65.

In what started out to be a state subsidy to keep two nuclear power plants open, expanded into funding for wind farms, solar installations, energy efficiency and added profit for Exelon. SB2814 was two years in the making and in the waning hours of the veto session, was amended 10 times to gain support.
The 500 page bill will ultimately cost over $13 billion over ten years, but not even the Attorney General could calculate the full impact. The governor successfully negotiated language that places a “hard cap” on the rate increases consumers and businesses will pay depending upon their electric usage.
SB 2814 contains a zero emission standard that will subsidize Clinton and Quad Cities nuclear plants about $235 million per year to offset the effects of wind and solar subsidies.
Much of the veto session and any discussion on budgets or pension reforms were overshadowed by the negotiations on this enormous piece of legislation. The bill will was amended to take effect until July so that fewer votes were needed for passage.
I fully support keeping the two power plants operating and the economic impact they produce in their regions. We should take a lesson from the community of Zion about the economic devastation that can occur when a power plant is closed. Losing about 10 percent of the electric generation in the state would also cause rate increases.
Manufacturers and large electric consumers lobbied hard against the bill and the higher electric costs they will now experience. No one could say for certain how many jobs will be lost at small and mid-size manufacturers as businesses seek to reduce their new operating costs to be competitive.

Six House Democrats filed a lawsuit against former State Comptroller Leslie Munger on Friday, her last day in office. The suit takes issue with the Comptroller’s decision to delay paying legislators every month because they have not passed a budget authorizing payment. No checks have been issued since May.
This move was seen by many as a push from the comptroller for lawmakers to pass a budget. The new comptroller, Susanna Mendoza, takes the oath of office today and has said she will also withhold pay unless ordered by the court to make payments. While working without pay is tough on legislators’ families, I fully support delaying payment so we legislators feel the pain that a lot of people and businesses are feeling as they wait for state payments.

Contract negotiations with the state’s largest union, the American Federation of State County and Municipal Employees (AFSCME), were officially declared at impasse in a unanimous decision by the Labor Relations Board several weeks ago. Until a written opinion is issued, AFSCME cannot appeal the decision before an Appellate Court.
The union has filed a motion in St. Clair County to prevent the Governor from implementing his final contract offer. The Governor has implemented a paid child bereavement leave for employees and last week announced plans for drug and alcohol testing. The new testing proposal does not allow for random drug and alcohol testing, but rather permits agencies to test employees if “specific objective facts and circumstances warrant rational inferences that a person may be under the influence of alcohol or a banned substance.”
Dozens of state lawmakers held a press conference last week urging the Governor and AFSCME to come back to the negotiating table, work together on an agreeable contract, and prevent a possible strike. There would need to be a substantive proposal by the union to justify restarting the contract talks. 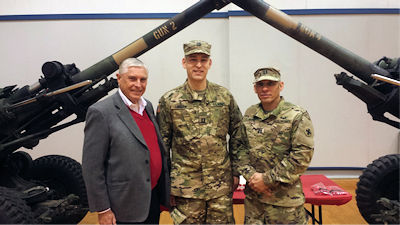 I look forward to seeing you as I travel around the district in the next few weeks. The snow reminds us this is winter and we should all drive with extra caution.