The legislature took action last week to remove one more barrier to releasing $350 million in new funding for the state’s K-12 education system. However, the State Board of Education (ISBE) is still reviewing data from school districts that will determine how new money will flow to the districts. ISBE estimates they will have accurate numbers in another month or two and can then start releasing the extra funding.

The General Assembly took action last week to over-ride the Governor’s veto of SB444 which corrected some errors in the new school funding reform bill. The corrections were passed overwhelmingly by both chambers in November but the Governor vetoed the bill in an effort to make more private schools eligible for the new student scholarship program.

The Governor’s office reached a solution with ISBE to allow private schools to be eligible for the program as soon as they met certain qualifications instead of having to wait a year. Some legislators tried to say the Governor’s action slowed release of the new funding. In a committee hearing on Monday, ISBE stated the delay was because of their due-diligence of school data and not the veto of SB444.

I urge the approximately 97 school districts who are the subject of the review and ISBE to complete this review quickly. School districts across the state are counting on the extra funding to improve the equity and adequacy of state funding for education. 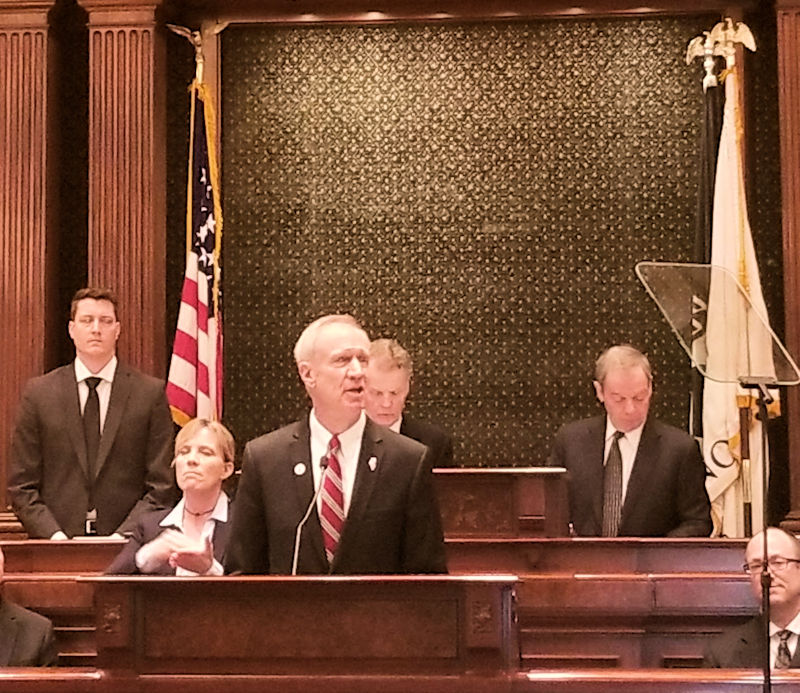 The Governor’s annual State of the State Address received the usual partisan criticism but it offered plenty of ideas to restore citizen confidence and stem the outmigration from our state. It remains to be seen if Speaker Madigan and Senate President Cullerton (shown in the background) will accept the olive branch or continue the government stalemate.

Governor Rauner cited the great assets and resilience of Illinois as building blocks to find future success for our state. Part of believing in our state’s potential is restoring the public’s trust in Illinois government. He noted several reforms that he believes are necessary to help improve citizen confidence in government.

Among the reasons people and businesses are leaving the state, according to the Governor, are high property taxes. He called for reforms in the assessment process, the right of residents to have a referendum for lowering taxes, and, I might add, increased funding for education that would relieve the property taxpayers’ burden of paying a state obligation.

Another reason to invest in education according to the Governor was to stimulate our state’s economy. Investing in education and entrepreneurship can help keep Illinois businesses thriving, creating jobs and give our students and our state the means to compete.

Perhaps the most important part of the Governor’s speech was when he promised to submit a balanced budget proposal later this month. A balanced budget would involve cutting spending, getting our pension payments under control, reducing prison costs, streamlining government with technology, and working to eliminate fraud. He noted that $450 million of taxpayer dollars were saved this year due to the increased investigation into Medicaid fraud.

The Governor acknowledged the challenges in this election year of working with the legislature to create the environment that attracts and keeps jobs, grows the economy, and yields personal income growth which will bring success to our state. He said, however, that it’s time to do what the people of Illinois want. You can read the full speech here.

The Illinois Attorney General believes that with the passage of the new federal tax plan, companies– especially public utilities– should share tax savings with consumers. The tax rate for corporations dropped with the new tax law from 35 to 21 percent.

Because these companies are saving more money with the lower tax rate, the amount they charge customers—since it includes federal taxes—should be decreased. The Illinois Commerce Commission is in charge of regulating public utilities, and they have ordered 22 companies to reduce their rates. ComEd is currently seeking approval to pass along approximately $200 million in tax savings through rate cuts to its customers in 2018.

Comptroller Impressed with the DeKalb Library

It was important to celebrate another milestone in the major DeKalb Public Library expansion last week. While the purpose included thanking taxpayers and two local banks for covering the delayed state funding, I hope DeKalb’s example might influence legislators and citizens across the state.

The DeKalb community is a great example of creating dreams, being persistent and working together to achieve the goal. Planning for the library expansion was a big dream that developed over more than a decade. Funding such a project took creativity, cooperation and everyone’s effort.

When committed state funding was put in doubt, persistence and bipartisan collaboration paid off. Working with other legislators, I was able to get a re-appropriation for the project in the FY2018 budget. When the Governor released the funding for payment, Comptroller Susana Mendoza was quick to write the check for the remaining nearly $4.6 million.

A program begun in 2009 has been highly successful at diverting non-violent criminal offenders from a pattern of crime. The program has been shown to cost less than incarcerating offenders and provides offenders with skills and support to become law abiding.

The program called Adult Redeploy Illinois was explained to legislators last week. It relies on local control and predominantly local resources though there was an $8.2 million state appropriation for the program this year.

Problem-solving courts (drug, mental health and veteran courts) assess the criminal to see if they would be appropriate for diversion into the community rather than sent to prison. The convicted felon receives intensive supervision probation and services from different state and local organizations that provide them with support that can change their behavior.

The program has expanded from 5 sites to 22 this year in 45 counties including DeKalb where the Treatment Courts Director is Mike Douglas. Among Redeploy goals are to reduce prison overcrowding, lower taxpayer costs, and put an end to the expensive and vicious cycle of incarceration. Studies have found that 75 percent of crimes occur because individuals are in survival mode and don’t know how to get the help they need.

The State Universities Annuitants Association (SUAA) has proposed a novel solution to stem the mounting cost of state pensions without diminishing promised benefits. The proposal was heard in a House committee last week and will receive more scrutiny from additional experts in the next few weeks.

There is general agreement that the state cannot continue to pay more and more of its general revenue each year for the unfunded liabilities of promised state pensions. The normal and legacy pension costs will increase nearly $600 million this year and consume about a quarter of the state’s General Revenue Funds. If the pension payments can be frozen at the current level, funding would be available for other state priorities in the future.

The proposal is to issue 27–year fixed rate bonds in 2018 that would erase the unfunded pension liability and bring the funding level to 90 percent. State pension payments would be fixed at $8.5 billion annually under the proposal until 2045. The plan developed by University of Illinois Professor in Actuarial Science Runhman Feng uses certain assumptions to calculate that the state would save about $103 billion in interest payments.

The chair of the committee that is evaluating the proposal says when Illinois has a pension debt that is just crushing, we need to be thinking big and, some would say, outside the box of conventional solutions. I will continue to monitor this proposal and the evaluation from financial experts. Your thoughts and comments are welcomed as well.