‘State of the State’ Worth Reading

If you missed the Governor’s annual State of the State address on Wednesday, it’s worth reading. Carefully. You can do so here. Sure he reiterated his turn around reforms, but there was a conciliatory tone asking all government branches and sides to work together–to compromise.
He stated that, “to achieve a grand compromise, we must cast partisanship and ideology aside. We must break from the politics of the past and do what is right for the long term future of our state.” The Governor repeated words and ideas from President Obama’s recent State of the Union address. While the President has faced roadblocks from a Republican led legislature, so the Governor has been blocked by a Democrat led General Assembly.
Perhaps there is divine providence in President Obama’s planned visit to Springfield in a few weeks. Might his popularity in Illinois melt the frozen gridlock for compromise on Illinois’ policies that will change the direction of our state? That’s my prayer.
The Governor highlighted accomplishments—yes, there are accomplishments– from this past year. As I have been saying for years, reducing waste in government operations and bureaucracy will save significant dollars. The Governor said we have achieved savings of $700 million so far.
Progress was also made in increasing state support for education, the bipartisan effort of eliminating the $1.6 billion dollar deficit from the FY2015 budget, reforming the economic development program—EDGE– to eliminate special deals, and successful labor contracts negotiated with 17 government unions.
I was especially attracted to the initiatives outlined in the speech that could transform the state:

I was struck by the tone and ideas in the speech. The Governor indicated ways to achieve spending reductions not by ending services to the most vulnerable, but by improving services, efficiencies and collaborations. I hope his proposals will be given fair consideration by citizens and the legislature.

In another effort to make Illinois government faster and more responsive, Governor Rauner again reiterated plans to turn the Department of Commerce and Economic Opportunity (DCEO) into a public-private partnership to boost economic development efforts. He announced that his administration and the DCEO will work to organize a newly formed private, non-profit organization that will focus exclusively on increasing Illinois’ competitiveness for job creation and investment.
The Illinois Business and Economic Development Corporation, filed articles of incorporation last week as a non-profit and will focus on sales, marketing and exceptional customer service. The corporation will maintain strict standards of transparency and accountability while also being able to get around the red tape that often hampers the DCEO.
The DCEO will maintain key functions, including federal program administration and final authority and oversight of all state grants and incentives negotiated by the public-private corporation.

The House and Senate approved an amendment to Senate Bill 2043 last week that “funds” community colleges and grants for low-income college students, but fails to provide any money. Supporters claimed the Comptroller could just prioritize paying colleges ahead of paying other bills which would mean further delays in paying bills for child care, schools, medical care, services for senior citizens, and the homeless.
State revenue is anticipated to be $32 billion this year and spending through court orders, consent decrees and appropriations already well exceeds that amount. SB2043 would just add $721 million to the list of $7 billion of unpaid bills. The legislature has a constitutional mandate to pass a balanced budget based on reasonable estimates of revenue and spending. This bill continues years of just playing games and giving empty promises.
I spoke in the debate for funding all of our higher education institutions and providing a funding source. House Bill 4539, filed by Rep. Brady on the same day as the amendment to SB2043, does just that and could have provided a vehicle for compromise and real solution to the current problems.
Funding for higher education and many human services awaiting payments could be provided by giving the governor limited emergency authority (HB4521) to set spending priorities and use available other state funds. Such emergency powers were granted to Governor Rauner in March and to previous governors. While I don’t like this funding solution, it is better than just adding to the state’s debts.

I took advantage of a break in the legislative debate this week to point out the City of DeKalb has made the semi-finals of America’s Best Communities. You can view my comments here. Local leaders in every town and city can review the plans of the 15 communities in the semi-finals and develop their own roadmaps for revitalization. Congratulations DeKalb!

The Township Officials of Illinois (TOI) organization does not feel that consolidating townships will improve efficiency or reduce costs. The group was quick to respond to the report issued by the State Task Force on Local Government Consolidation and Unfunded Mandates last month. The report included 27 recommendations to help lower local taxes and streamline Illinois’ nearly 7,000 units of local government.
According to TOI, townships have had a smaller increase in taxation than any other type of government over the past 20 years. They further note that as the size of local governments increase, so does spending and borrowing per capita. They observe that wage rates also increase as the unit of government gets larger.
An updated study on local government efficiency and size commissioned by TOI will be released soon. In the meantime, the group urges legislators to review the task force recommendations cautiously.

I hope you will join my Education Advisory Council meeting this Thursday at the County Outreach Building on Annie Glidden Road in DeKalb at 6:30 p.m. Your feedback on various issues being discussed in Springfield will help me better represent the views of this area. Please RSVP your attendance to my office by phone (815-748-3494) or by e-mail (bob@PritchardStateRep.com). 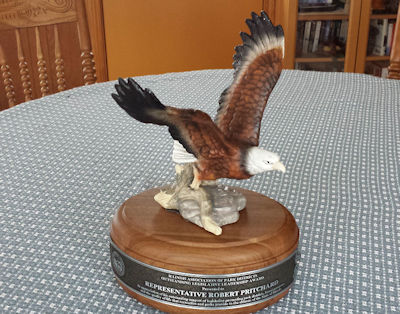 The Illinois Association of Park Districts singles out four legislators each year for their concern about preserving the natural environment, support for improving the quality of community life, and response to park district issues. I was honored to join Representative Sente, Senator Radogno and Senator Tom Cullerton in accepting the award over the weekend. My involvement with park districts began early in life when I took swimming lessons at the Sycamore Park Pool. Growing up in the country, I developed an appreciation for nature, open space, and the freedom to bike and hike which I wanted to share with others through community parks.Serving on various boards I saw how park districts and recreation programs added immensely to the quality of life for communities, engaged youth and encouraged healthy life styles. They also protected and preserved open space and our natural surroundings. I saw how parks were a part of the attraction that brought new residents to communities. 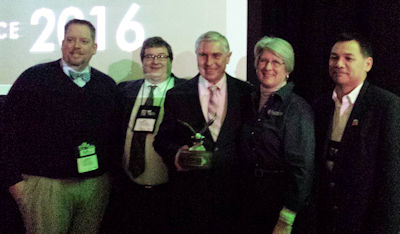 It was Mary and my pleasure to join staff and board members of the Sycamore and DeKalb Park Districts at the awards luncheon and hear about their exciting programs for this year. Sycamore is making great progress in their facilities expansion.
I will be traveling the district this week to see if the groundhog saw his shadow. Stop me for conversation.