Work Begins in Springfield
The deadline for lawmakers to introduce legislation for the 2017 Spring Legislative Session in the General Assembly was Friday, February 10th.  As of that date 3,826 bills were filed in the House.  Over the next six weeks, House Committees will meet to review these bills and hold hearings.  This is the beginning of the legislative process where bills will be debated and a few will move forward for full House consideration and if approved move to the Senate for similar action.
While I filed 16 bills on behalf of constituents or state agencies, here are a few with special meaning to me.  HB2447 makes changes to the Illinois Vehicle Code, providing that a person commits reckless driving when they knowingly drive with a serious medical condition known to cause loss of consciousness, and fail to have the condition under control.  This legislation was prompted by the deaths of two young people in Sycamore from an accident caused by a person who failed to control her medical condition.
HB2445 helps assure that veteran disability benefits are used for the care and compensation of the injured veteran.  Too often these funds are used by family members for other purposes.  HB537 clarifies in the election code the language that must appear on ballot referenda for bond issues and various tax increases.  Frequently the language of the referenda are not clear to the average reader and the real costs to the taxpayer are unspecified.

Focus on Education Committees
With the start of each General Assembly cycle, the two chambers organize themselves for the work they seek to do and form new committees.  The House this year named 58 committees, many to discuss special issues while others will consider the legislation that has been filed.
I am assigned to serve on the following committees:  Elementary and Secondary Education:  Licensing, Higher Education Policy, and Appropriations-Higher Education.  I will serve as minority spokesperson for the following committees:  Appropriations-Elementary and Secondary Education, Elementary and Secondary Education: Curriculum and Policies, and State Government Administration.
I was also appointed by House Republican Leader Jim Durkin to serve as the Co-Chairman of the Commission of Government Forecasting and Accountability (COGFA).  The 12-member board represents an equal number of members from each chamber and political party.
The purpose of COGFA is to provide the General Assembly with information on the state’s economy, revenue projections, long-term state debt outlook and the overall operations of Illinois’ government.  Several reports are published throughout the year on these topics with detailed information and research.  COGFA also produces special reports throughout the year on issues that could potentially impact the economic well-being of the state.  Two areas of significance include the commission’s annual Budget Summary, and the Report on the Financial Condition of Illinois Pension Public Pension Systems. 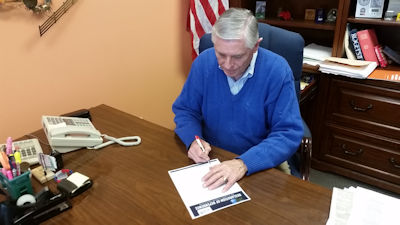 The higher education community and supporters gathered in Springfield last week to point out for legislators the damage being done by the lack of a state budget and funding for higher education operations, research and students.
The rally, hosted by The Coalition to Invest in Higher Education, pointed out that the higher education system generates more than $50 billion in statewide economic activity each year and employs 175,000 people directly and thousands more indirectly to supply the system’s needs.  With continued declining state investments, Illinois colleges and universities are being irreparably harmed.
With the uncertainty in funding for institutions, faculty and thousands of our best students are leaving the state.  The lack of funding for the student Monetary Assistance Program alone is preventing thousands of Iow- income students from getting the education needed to change their life situations.  I signed a declaration of dependence on Illinois higher education for the growth and future of our state.

Reform Measures Move Out of Senate
This week three reform proposals passed out of the Senate, as part of the Senate’s ‘Grand Bargain’ proposal aimed at ending the budget impasse.  The three bills that now head to the House involved procurement reform, local government consolidation and low interest loans for home rule municipalities.
The procurement reform bill will bring more flexibility to the government procurement process.  The purpose is to streamline the process to produce more cost savings while still assuring ethical purchases.  These reforms will help cut unnecessary costs of government and are important steps in helping get the state’s economy back on track.

Governor Presents Budget Proposal
Governor Rauner will present his FY2018 budget proposal to the legislature this week in hopes of passing the first budget since 2015.  Out-of-control spending well exceeds available state revenue and prospects of crafting a balanced budget by cutting spending without additional revenue appears to be a political impossibility.
The three national credit bond rating services continue to look negatively on the future of Illinois due to the lack of a state budget and current state obligations that exceed $160 billion.  Instead of focusing on this, our state’s biggest crisis, much time was spent last week in the House pontificating on current events taking place at the national level.
Perhaps the Governor in his budget address will focus on the Chicago Civic Federation’s FY2018 roadmap for fiscal sustainability.  The group’s recommendations include limiting state spending growth to 1.7 percent through FY2022 and increasing taxes.  The Federation suggests raising the income tax to 5.25 percent for individuals and 7 percent for corporations until 2022.  Increasing the earned income tax credit by 50 percent will ease the tax burden on low income residents and eliminating the state exemption for federally taxable retirement income will bring Illinois in line with 41 other states.
The Civic Federation went on to propose expanding the sales tax base but lowering the rate, limiting business tax expenditures, merging all teacher pensions into one account and borrowing to pay the bill backlog, estimated to be $14 billion by June.  You can read the Chicago Civic Federation’s full recommendations (here).
Look on my Facebook next Wednesday for a link to watch the Governor’s address live and then share your thoughts!
Join in Upcoming Discussions
I value citizen comments about solutions to our state’s fiscal problems and invite you to two public discussions later this month.  On Monday February 27 there will be a meeting at 7 p.m. at the County Outreach Building, 2500 North Annie Glidden Road, DeKalb.  On Wednesday March 1 there will be meeting focused on educational issues at the County Outreach Building at 6:30 p.m.
While some national public meetings with legislators have resulted in shouting matches with little exchange of ideas, I am looking forward to the thoughtful civil comments from local residents.
A Historical Fact For Our Bicentennial
The Illinois House voted 199-56 to ratify the 14th Amendment to the U.S. Constitution and thus became the first state to vote for the abolition of slavery on February 1, 1865.