· Budgeting From Crisis to Crisis

Budgeting From Crisis to Crisis

The Department of Aging notified home care providers and the legislature that as of Friday they have spent their budget and need a supplemental appropriation of $173 million to fund services through June. Actually, I’m told they could get by with $70 million but then what’s a few million more among friends?

You may remember the administration just received approval for $2.1 billion to finish the fiscal year and never mentioned the need for additional funding in this program. What appears again and again is that the Quinn administration can’t manage the budget approved by the legislature. Instead of allocating the budget over 12 months they spend it in 8 and then ask for emergency supplemental appropriations. This is no unexpected emergency, its poor fiscal management.

The House solved another emergency this week when the administration ran out of money and cut staff who review medical licenses. The state was faced with the crisis of not approving for up to 18 months any new licenses for medical school graduates or renewal of currently practicing physicians. Doctors can’t work without licenses but rather than propose some type of emergency approval process, the administration was content to just say wait—don’t work–for up to a year- and- a-half.

Senate Bill 622 passed the House on Thursday to transfer $6.6 million owed local units of government to the Medical Disciplinary Fund so the licenses can be processed. The bill also raises license fees for physicians from $300 to $700 to repay the local government tax fund. 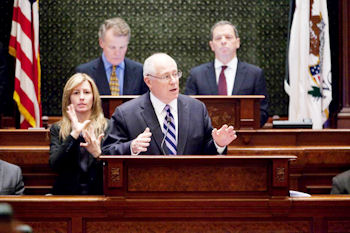 The governor was given a two- week extension to prepare his annual budget address but his plan will likely receive little consideration from the House. For openers he anticipates more revenue–$500 million more—than the House established just the day before. He proposed expanding Medicaid, holding spending of most items at last year’s levels, while significantly cutting classroom education and school busing.

He took credit for reducing Medicaid appropriations this year but then failed to implement those reductions which will result in more unpaid bills. After talking about Medicaid reductions, he called on the House to expand eligibility for Medicaid next year which will surely drive up costs of the program.

The governor noted that growth in pension payments is causing a reduction in other areas of the budget and that many reform proposals have been made. He failed to outline how he felt the legislature should navigate the mine field of constitutional restrictions that would be fair to employees and retirees, and cut pension expenses.

While the governor talked about preserving funding for early childhood education, scholarships for college students and services for veterans; and proposed more funding for mental health care; he called for significant reductions in classroom education and busing reimbursements. His suggested state funding levels combined with falling property tax receipts have school districts across the state in severe economic panic.

During his speech, Governor Quinn spoke vaguely about growing Illinois’ economy as a way to increase employment and resulting state revenue. I stand ready to help the governor in those efforts. However, in the next breath he proposed raising corporate taxes by nearly half a billion dollars to pay state bills. Governor, you can’t have it both ways; increasing the cost of doing business takes money away from growing the business.

Details about the tentative agreement between the Quinn administration and the 40,000 members of the American Federation of State, County and Municipal Employees (AFSCME) are emerging very slowly. It appears that the union has won pay increases in three of four years in exchange for higher healthcare premiums for workers starting next year and requires retirees next year to pay healthcare premiums, many for the first-time.

The state’s Monetary Award Program (MAP) for college students stopped accepting applications on March 1, the earliest date in the history of the MAP Grant program. Students seeking financial aid are encouraged to go ahead and file their FAFSA forms, since the document is used for all kinds of other grants. Information about college costs and scholarships are available at www.collegezone.com.

The MAP Grant program is one of the country’s largest need-based grant programs for college students. Currently, the MAP grants help approximately 140,000 Illinois students gain access to college. Governor Quinn, in his budget address, recommended that funding for MAP remain constant for FY2014.

Several legislators joined me in introducing legislation this session to make it easier for veterans to qualify for in-state college tuition. Veterans who move into Illinois or haven’t lived in Illinois for the previous three years have to pay non-resident college tuition rates. HB1006, HB1163 and HB2353 all sought to give veterans immediate residency status for college tuition purposes. Two of the bills passed out of committee and to the full House for debate. 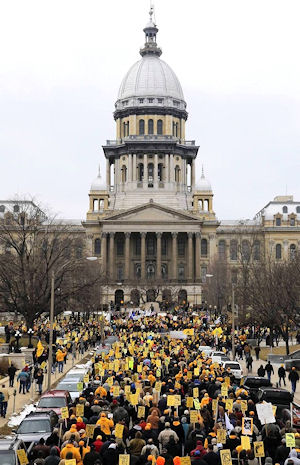 While Representatives and Senators were gathering in the Capitol for the Governor’s Budget Address last week, a coalition of several thousand gun-rights advocates were marching from downtown Springfield to the Capitol for Illinois Gun Owners Lobby Day. It was a record-sized demonstration, no doubt because of the recent U.S. Appellate Court decision that the current concealed carry ban in Illinois is unconstitutional and pending concealed carry legislation in the House.

After a rally on the Capitol steps, Second Amendment supporters, wearing yellow t-shirts and carrying signs, dispersed to talk with their legislators about the right to carry and their hopes that their FOID card information remains private. Several dozen constituents visited my Springfield office. The House has yet to debate a comprehensive concealed carry weapons bill. Only amendments that severely limit the right to carry a weapon have been considered.

With slightly more than a year remaining before the income tax increase is set to roll back, legislators are beginning to discuss extending the tax. Many skeptics never believed the tax increase would be temporary but neither has it accomplished paying down the backlog of old bills or funding critical programs and infrastructure improvements.

To roll back the tax revenue would require massive cuts to education and nearly every other service for the next several years. Then there is the matter of paying over $9 billion in unpaid bills. Neither the Governor nor a majority of legislators seem ready to do that. Even citizens at my recent morning discussions over coffee felt the tax should be extended.

As I have pointed out, schools are in a major fiscal squeeze with state and federal mandates, less state funding and lower property tax collections. Even so, if the tax is to be rolled back, major reductions must be made in FY2014. 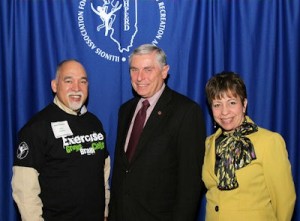 Members of the Illinois Association for Health, Physical Education, Recreation and Dance (IAHPERD) gathered in Springfield last week for their annual Shape-Up Lobby Day. They came as they do every year, to raise awareness about the importance of daily exercise in school and in the work place that improves brain functioning, concentration, and learning. Shown with me are Luis and Clersida Garcia from Northern Illinois University.

Many schools drop recess and daily physical education classes in an effort to offer more time for study and academic classes. However, research shows that learning and test results improve after physical activity. I observe that during long days on the House floor, when there is little physical activity, legislators become easily distracted, fail to engage in the debate and seem very tired. The legislature could do a better job of focusing on the important issues if we would take breaks to exercise.

Last week the House Republican Caucus launched a new social media site www.thecaucusblog.com. Through this user-friendly site, you can follow along in real time as legislation is debated on the House floor. Legislators will post their opinions about pending legislation and provide snippets of explanation for difficult items that are being discussed.

The blog will feature insights, provide updates, highlight House Republican efforts, and keep you in the loop for all daily happenings in Springfield. Set the Caucus Blog up as a “favorite” on your browser and start following along!