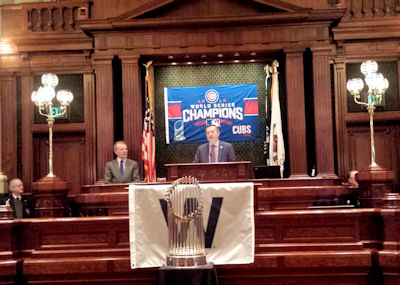 Go Cubs Go!
The Chicago Cubs’ Championship World Series trophy was welcomed to the General Assembly last Wednesday.  During a special joint session of the House and Senate, the trophy sat in the front of the House Chamber, while state lawmakers gave speeches honoring the Chicago Cubs’ historic World Series title claimed last November.  A special House Resolution was read congratulating the team, followed by a special address by Chairman and Owner of the Chicago Cubs, Tom Ricketts.
The thought ran through my mind that if the Cubs can win the World Series after 108 years, perhaps this is the year Illinois will get a budget.  I know this is a long-shot but our state can’t “wait until next year.”
The Chamber was adorned with the classic blue “W” flags, and the team’s signature song, “Go Cubs Go” was played.  While the current Cubs team is at Spring Training, Chicago Cub and Hall-of-Famer, Ryne Sandberg was in attendance.
After leaving the Capitol building, the World Series Trophy traveled to the Abraham Lincoln Presidential Museum where roughly 1,000 people were able to get their photographs taken with it, while Ricketts and Sandberg were also on hand for photos and autographs.

Bills Proceed Through Committees
Committees continue to meet in Springfield to review legislation and determine which bills will move forward for debate and votes in the House.  This week the bills passing out of committee included HB3490 which amends the Nursing Education Scholarship Law.  This law allows Northern Illinois University to be added to the list of approved institutions for potential scholarship help for nursing graduate students.
An initiative to remove an obsolete fee paid by grocery, retail and restaurant food handlers (HB3684) passed out of the House Consumer Protection Committee.  Since food handlers must have a federal certificate there is no need for Illinois to have a duplicate test or fee.
Legislation that would require Illinois’ employers to pay overtime to any employee making less than $47,476 passed the House Economic Opportunity Committee.  HB2749is identical to regulations written by the Obama administration but not implemented due to a federal court nationwide injunction.  The committee also passed HB2462 to prohibit businesses from requesting applicants to provide previous salary and benefits compensation.  This bill is intended to address concern that gender discrimination is perpetuated by businesses based on salary history.
Another bill that moved forward was one of my initiatives, HB2447, that responds to a situation where two young people were killed in Sycamore.  The bill provides that a person commits reckless driving if they are involved in an accident and the proximate cause was failing to control a medical condition likely to cause loss of consciousness or control of the vehicle.  This bill unanimously passed out of the Transportation Vehicles and Safety Committee in the House, and is currently in its third reading.  You can follow the status of the bill here.

Revenue Projections Offer Mixed Outlook
The Commission on Government Forecasting and Accountability (COGFA) presented estimates last week that FY2017 state revenue would drop $674 million below earlier estimates but then increase $938 million in FY2018.  The projections were based upon the weakest economic recovery in over 60 years, job growth that has not recovered to 2000 levels, lost population and fewer exports due to the strong U.S. dollar.
Without legislative changes to encourage job growth, state revenue increases, or consumer activity; the report predicts that Illinois’ largest revenue sources will experience only modest growth in the upcoming year.  Without a balanced budget or relief from court orders requiring spending above revenue levels, the list of unpaid bills will continue to grow in FY2018.
Lawmakers typically use the expected revenue forecast from COGFA as a starting point for crafting a state budget.  However, since spending has not been lowered to current revenue levels nor has legislation passed for increasing revenue in FY2018, the budgeting process will be difficult to initiate.  View the full report from COGFA here.

Legislators Warned About Cost of Healthcare Changes
A number of advocates for low income residents briefed legislators last week about the impending replacement of the federal Affordable Care Act (ACA).  Their message was that block grants or per capita caps will shift cost for healthcare from the federal government to states, constrain growth in the coverage and further destabilize the Illinois economy.
Over 300,000 Illinois residents signed up for insurance coverage through the Affordable Care Act enrollment period this year and nearly 3 million Illinois residents utilize Medicaid.  As a result of this participation, the federal government has paid over $14.1 billion for Illinois Medicaid coverage and $4.2 billion for Medicaid expansion and marketplace subsidies last year.
The advocates pointed out the benefits of the ACA that should be included in any new healthcare legislation including cost of medications, coverage for pre-existing conditions, removal of lifetime expense limits and preventative care.

NIU Testifies about Budget Impact
Representatives from Northern Illinois University were among several universities testifying about the impact severe state budget cuts have had on their students, employees and enrollment.  The Senate Education Committee invited all public universities to share how they have managed to operate with significantly less state funding over the past two years.
Mike Mann, the Associate Vice President of State Government Relations at NIU, and University President, Dr. Douglas Baker, testified that decreases in state funding since July 2015 have amounted to $107.5 million which is more than a full-year’s funding amount at FY2015 levels.  As a result, the university has made severe spending reductions, cut salaries or continued the five year salary freeze, and consolidated functions and departments.
The NIU representatives said without additional funding for the past two years, it is nearly impossible to plan for FY2018 and the future of the university is extremely unsustainable.
President Baker announced last week that restructuring in the Division of Student Affairs was made with the goal of being more strategic, impactful and effective.  The Enrollment Management team is integrated with Marketing and Communication to improve recruitment which has declined for many years.  The position of vice president for Student Affairs has been eliminated.  Finally, the position of Associate Vice President for State Government Relations will continue to be a liaison among university members and the board but also manage university operations.
The President’s Program Prioritization Report will be updated on March 22 with a chart showing progress to day.  You can view the chart by going to www.niu.edu/program-prioritization/.

Highest Consumer Complaints Involve Debt and Theft
Last week was National Consumer Protection Week and to build awareness, Illinois Attorney General Lisa Madigan released a report of the top consumer complaints her office received this year.  Consumer debt was the most frequent complaint followed by identity theft.
Identity theft and promotion schemes that de-fraud consumers of hard earned money have been on the rise for years.  In 2016 there were 2,387 complaints related to fraud and 2,391 related to identity theft.
The Federal Trade Commission (FTC) received over 74,000 complaints from Illinois residents last year, ranking the state 25th for consumer complaints.  The state ranked 5th in identity theft complaints.
It is important to know how to protect yourself from theft and fraud, and how to report crimes, scams, and fraud to the Attorney General’s office.  By sharing your complaint with the Attorney General, they can make other residents aware of scams and protect Illinois consumers.
Experts say that if your instinct tells you something seems wrong, it probably is.  Should you need to contact the Attorney General’s Office to file a complaint, call the Consumer Fraud Hotline at 1-800-386-5438, or visit http://www.illinoisattorneygeneral.gov.

Speaker Creates Another Education Funding Task Force
While the Governor’s Commission for School Funding Reform produced a frame work for improving the equity and adequacy of funding, Speaker Madigan has created a House task force to continue work on education funding reform.  There are 26 members on the task force and I have been appointed to be the Republican Spokesman.
In creating the second House Education Funding Task Force in as many years, the Speaker said unresolved issues should be addressed and legislation should be drafted.  I am co-sponsor of HB2808 which implements the Governor’s Commission recommendations of an Evidence Based Model for adequately funding each school district.
House Republicans asked the Speaker to identify the unresolved issues and the parameters by which the task force is to operate.  If the task force is a stalling technique to delay school funding reform or intends to revisit issues where there was bipartisan, bicameral consensus on the Commission, the Republicans will withdraw our participation.
I believe there is momentum to pass funding reform legislation this spring if the Speaker allows action.

Have a great week and call me in Springfield to share your opinions or if I can be of assistance.