· Give you Input at Education/Veterans Advisory Councils

Last week the House approved another element of state employee pension reform but it needs modifications to make it fair and constitutional. HB1165 severely limits annual increases to pension payments (erroneously called a COLA or cost of living adjustment) for retirees receiving over $25,000 per year. Reducing the annual adjustment and delaying receiving those payments for five years after retirement or until age 67, would reduce the state’s unpaid pension liability by $100 billion over the next 32 years.

The plan clearly changes what employees have been promised during their working careers but then it assures them that the pension system will survive. I argued in debate that the University of Illinois Text Box: During the pension debate, Rep. Pritchard argues for a fairer cost of living adjustment.Government and Public Policy Institute proposal for a real COLA would be fairer and constitutional. I urged that the final pension reform legislation include the Institute’s recommendation.

The House and Senate have approved four bills which I prefer to call elements of pension reform rather than actual legislation. They deal with retirement age, a ceiling on pension payments, limiting annual increases, and choosing between annual payment increases and health care coverage.

There are many other reasonable elements of pension reform that have not been debated and should be included in a final omnibus bill. Among them are concepts in HB 3162, which many constituents support, to increase employee pension contributions and assure the state makes its pension payments each year. This bill is still held in the Rules Committee.

The debate over reforming state pensions has been long and worrisome for most state employees and retirees. It has involved votes on many concepts to see which are supported by a majority of legislators. I advise constituents that this is a process (like making sausage) and one should wait for the final product before judging its results.

Last Friday marked the deadline for House bills to be voted out of committee if the sponsor wanted them to be considered for further debate in the full House. As you can imagine, the committee schedule was very hectic and some bills were approved that need further amendments or negotiation with opponents.

In any one year, it is common for more than 3,000 bills to be filed and most to be debated in committee. We learned that midway through our 2013 session, there are still approximately 500 bills awaiting House action. Personally, I had seven bills receive approval, and move to the Senate for action. Highlights of action this past week are listed below.

HB 188: makes it illegal for children under the age of 18 to use a tanning bed even with parent approval. Many felt individuals were ignoring the potential for skin cancer linked to the use of tanning beds. The bill now heads to the Senate.

HB1745: states that counties my hold an electric aggregation referendum in only the unincorporated area of the county that has not approved such aggregation.

HB1809: expands the list of health impairments that qualify a person for a disabled parking placard to include cancer treatment.

HB 1918: provides that an individual convicted of aggravated battery against a police officer must serve 85% of their sentence. This bill stems from an incident in my district.

HB 2232: allows park districts to participate in electricity deregulation and shop for the lowest-cost energy provider. Municipalities, counties and townships can already shop for reduced rates with voter approval and many are reducing costs by 30 percent.

SB 09: clarifies the legislative intent of the 2011 Electric Grid Infrastructure Law–known as the Smart Grid Law–and directs the Interstate Commerce Commission (ICC) to allow utilities to recover certain costs. The bill now heads to the Governor.

Bond rating agencies who have downgraded our state to near “junk bond” status are now downgrading the ratings for public universities. The agencies are concerned with the universities’ reliance upon the state for their funding. 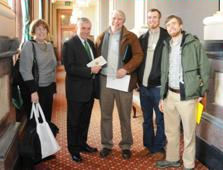 Four members from DeKalb County Community Gardens participated in Local Food Awareness Day at the capitol recently and stressed the importance of eating fresh foods. The local group began with one small garden plot behind a DeKalb elementary school in 2009 and this season will expand to 12 sites in several communities.

Many of the garden plots are located on school grounds where students learn to care and nurture the gardens as they study many applications of food production. The produce is shared with neighbors and food pantries. Shown are Sheryl Nakonechny, Dan Kenney, Nathan Dettman and Heath Johnson. 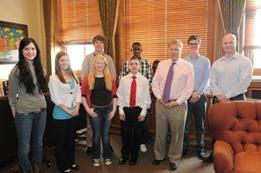 Members of the Council are chosen by their schools and serve as representatives of their student body. Those visiting with Republican Leader Tom Cross were: Byron Downen of Hiawatha High School; Brianna Hooker, Michael Hermes and Henry Johnson of Sycamore High School; Renae Kurpius of Genoa-Kingston High School; Kenneth Morina of DeKalb High School; Katie Hoffman of Hinckley-Big Rock High School and my assistant Jesse Sheehan.

The American Society of Civil Engineers (ASCE) has rated 73 percent of Illinois’ roads as either “poor” or “mediocre.” The report went on to say that 2,300 of Illinois’ 26,500 bridges are considered to be structurally deficient, which usually results in a greater need for makeshift repairs and weight restrictions.

Illinois has the fifth-highest state motor fuel tax–39.1 cents per gallon–yet its roads are among the worst in the nation. According to the ASCE report, bad roads cost Illinois drivers $2.4 billion annually in extra vehicle repairs and operating costs. On an individual basis, the poor conditions cost each motorist an extra $292 per year.

The report did credit transportation officials for implementing a computerized traffic monitoring system during road construction projects so that traffic patterns can be altered for maximum efficiency.

Converting to more electronic files has freed-up space in offices and has allowed employees more time to focus on the needs of citizens. While the initial cost of the software was $325,000, digitization has already more than paid for the outlay in just three months. This is a great example how the state can cut costs with improved processes and operations.

Northern Illinois University has received authorization to repair the roofs of two buildings on its DeKalb campus. The $600,000 grant is part of the Illinois Jobs Now! capital construction program, which recognizes projects that create jobs and help drive the Illinois’ economy. Sterling Commercial Roofing Company won the bid to install new roofs for the Music Building Library and the Visual Arts Building by August.

Give your Input at Education/Veterans Advisory Councils

One valuable way I obtain information to help me represent the priorities of this district is through advisory councils. Next week two of my councils will be meeting and you are welcome to attend.

On Tuesday April 2, my Veterans Advisory Council will meet at 6:30 p.m. in the county’s Community Outreach Building, 2500 North Annie Glidden Road, DeKalb. We will discuss pending legislation affecting veterans, the state budget and issues from members.

I hope you take time to reflect on the meaning of Easter and Hanukkah celebrations this week.