Unlike much of the legislation we’ve been voting on in the past year, a bill went through the negotiated process and this past week received bipartisan, near unanimous support in the House.  This gives hope that the legislature can still pass a budget if it allows both parties to participate.

The bill at issue reverses the appointed Chicago Public School Board (CPS) back to an elected board.  Since the 1995 School Reform Act, members of the current 7 member board have served at the appointment of the mayor.

House Bill 557 creates a 20 member elected school board, with an at-large elected president, beginning in 2018.  The board districts will be created through the same process that the legislature uses to draw its own legislative maps.

When the bill was heard in the education committee, my colleagues and I proposed several improvements to the bill that for once were not immediately dismissed by the ruling party.  The sponsor added language to avoid a revolving door of board members leaving to join a district vendor, and bans conflict of interest for board members.  He also dropped language that allowed the board to be the first in the state to be paid for their services.

We were not as successful in taking the politics out of drawing board district lines but then citizens may have a chance to change that this fall.  There is hope a constitutional amendment will be on the ballot to remove politics from the legislative redistricting that occurs in our state every decade.

When the legislature convened on March 1, there was a small glimmer of hope that progress could be made on funding higher education and human services.  The minority leader of the House met with Speaker Madigan to suggest a compromise spending plan with a revenue source using any of several bills that have been introduced in the House.  The only request was that Republicans and Democrats work together for a solution and avoid more votes on spending bills that just drive the state deeper in debt.

While the Speaker said he would get back to Leader Durkin thus creating a little optimism, the answer came not in words but by calling partisan bills for votes during the week.  The first vote was an over-ride attempt on SB2043 which the Governor had vetoed because it had no funding source.  The bill, which was heavily lobbied by college students, funded MAP grants to low-income students and base operating funds for just community colleges.  It failed by two votes.

Late the next day amendments to HB648 and HB2990 were introduced and voted out of a surprise committee meeting with only Democrats present.  Together, the bills provided loan forgiveness—not actual revenue—and operating funds for nearly every state program still waiting to be funded.  The $2.9 billion general revenue appropriation again had no funding source.

I opposed these bills because spending money when our bank account is empty is wrong and only misleads to program recipients expecting money and instead receiving an IOU.  This was an obvious attempt to allow some legislators to tell voters before the primary election that they had funded their programs.

The Comptroller’s Office currently reports a backlog of unpaid bills totaling $7.2 billion, with almost 50,000 unpaid vouchers on hand.  Budget Director Tim Nuding succinctly summed up the situation by saying “The legislature has already allocated all existing resources to other programs.”

The Illinois Department of Financial and Professional Regulation (IDFPR) has announced that it will no longer issue paper renewal notices or copies of professional licenses.  “By enacting a paperless renewal process and shifting to an electronic verification of licensure, we increase efficiency, reduce costs, and provide an overall better experience for our licensed professionals,” said Bryan A. Schneider, IDFPR Secretary.

“Whereas paper-based renewals intermittently experienced delays during peak renewal periods, the online license renewal streamlines that process by eliminating the need to, essentially, push paper,” Schneider added.  The agency believes by providing electronic verification of a license through their website, they can provide the most up-to-date information available.

Licenses will now be able to be renewed quickly, with information updated daily, and easily online.  Going paperless is part of the Department’s efforts to modernize and is expected to save $3 million dollars over the next 5 years.  Click here for more information from the IDFPR.

Last week was the first time this year that legislative session lasted more than two days.  The longer time allowed organizations to bring members to Springfield and visit with legislators about their programs, funding and bills. 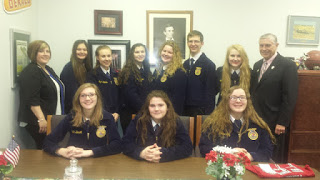 More than 1,000 people were on hand Tuesday for the 46th annual Agriculture Legislative Day.  I had high school students from the Somonauk-Leland-Sandwich FFA Chapter visit about the role agriculture plays in the national and state economies, the vast career opportunities, and the importance of agricultural education.

Farmers were present to discuss the role of county fairs, the damage of not having a state budget, and fuel and transportation issues.  As a farm operator, I understood most of the issues but found visiting with constituents to be helpful.

Representatives of the Farm Credit System were on hand to be recognized for 100 years of service to rural residents.  I visited with Lee Strom, a farmer from Kane County, who served on the 3-member national board of the Farm Credit Administration for 9 years.  Strom explained that the credit system began because farmers did not have adequate access to capital to buy land and the system later expanded during the depression of the 1930s to provide credit to buy farm production items like seed and fertilizer.  The system was modernized by Congress in the 1980s to allow for consolidation, efficiency and lending for rural development.

Illinois has benefited from the farm credit system which today lends over $10 billion to farmers to produce a safe, wholesome, abundant food supply for not only the United States but also consumers around the world. 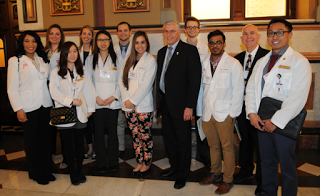 On Wednesday college students studying to be pharmacists shared their thoughts and advocated for legislation that would give more flexibility to pharmacists.  Among the bills they support is HB 3627 which would allow pharmacists to administer vaccinations for all patients over 10 years of age.  They said more children would be likely to receive immunizations if they were less expensive and more conveniently accessible.  Pharmacist Tim Lehan from DeKalb accompanied the students and has always been a good mentor for them and source of information for me.

One of the bills I am sponsoring passed out of committee last week and will assure that universities, colleges and all units of local government can continue to participate in a 12-state buying group.  HB4639 would amend the state procurement code to exempt purchases negotiated by the Midwestern Higher Education Compact (MHEC).

The state higher education procurement officer believes purchases through the compact violate state law because he cannot review each purchase.  The purpose of the compact is to negotiate the best terms with providers of such products and services as computer hardware, insurance and technology services.  Since Illinois has been a member of MHEC, universities, colleges, school districts, park districts, libraries, cities and counties have saved over $190 million on their purchases.

I encourage all units of local government to visit the MHEC website and see if the compact can help save on their next purchases.

Five more Northern Illinois University students have been named Forward, Together Forward Scholars based upon their examples of character, service, advocacy and scholarship.  The program honors the spirit of the students killed in the February 14, 2007 shooting at NIU.  An endowment totaling $870,000 was created by over 1,800 donors to fund the scholarships.

I had the opportunity to meet this year’s scholars and was “blown away” by their campus and community service, concern for other students and academic progress despite many challenges.  Liza Freeman, Executive VP and Provost, read a quote from teacher and humorist Leo Rosten that seemed to capture the philosophy of these students:

With no shortage of work and issues facing our state, the House adjourned last Thursday until April 4.  Republicans tried to keep the House in session to negotiate a balanced budget and real funding for higher education and human services but their efforts were ruled “out of order.”

It’s no coincidence that the House is going on a month-long break and has ignored hard choices about budget funding, cuts and reforms for months.  This is primary campaign season and making hard choices might anger some voters.  There’s no doubt that Speaker Madigan is putting campaigns above the good of the state.