It’s been three years since the Senate started discussing major changes to the great disparity in funding for K-12 schools across the state. Then all of the school management groups came together and proposed their own package of solutions last fall to improve public education in Illinois. Even Governor Rauner has made world class education a center point in his agenda and has proposed spending nearly $293 million more on education next year. It now appears Speaker Madigan is ready to engage the House in this discussion.

Last Thursday Speaker Madigan created a bipartisan education task force that will focus on studying the way the state distributes funding to public schools and how changes in the school aid formula could impact schools throughout the state. The task force will consist of 13 Democrats and 10 Republicans including legislators representing Southern Illinois, the collar counties, suburban communities and Chicago. House Majority Leader Rep. Barbara Flynn Currie (D-Chicago) will chair the task force and I have been appointed the Republican spokesperson. See the announcement in the State Journal Register here.

A plethora of bills have been introduced in the House and Senate this year aimed at equitable and adequate funding, shared accountability, 21st Century Learning and highly effective educators. The House Appropriation Committee for Elementary and Secondary Education discussed one of these bills last week—SB1, a revision of SB16 from last year– which focuses on changing the funding formula created in 1997.

As the House task force begins its work, it should build upon all the testimony and bill debates of prior years. Key among these learnings should be that funding needs to be based on student needs: more funding for students in poverty, English language learners, and students with disabilities. To help the poorly funded districts, more state money needs to be pumped into education, not redistributed from other districts. Regional cost factors should be included, school efficiency and effectiveness should be considered, all-the-while focusing on adequate student progress.

If you have kids or grandkids in school you are well aware of all the testing that students are asked to take these days. Weeks of testing that combined with “preparing for the test” leaves too little time for actual instruction. There seems to be a parent and student revolt brewing that I witnessed over the past few weeks.

Most recently I attended a meeting of Sycamore High School students and parents who were very articulate in their concerns about too much testing and not enough time for instruction. House Education committees have heard testimony from parents, teachers and some school officials over the shortcomings of the newest test—Partnership for Assessment of Readiness for College and Career Success (PARCC). Then there was a bill—HB306—that passed out of committee last week that would allow parents and guardians to have their student excused from the PARCC test (next year if the bill becomes law).

We certainly need to measure whether students are learning the material, so teachers can make individual adjustments and we can compare our student success with other areas of the country. A standardized test of student master of our learning standards is required by the federal government for Illinois to receive its nearly $1.3 billion in federal funding. However, do we need all the tests that local schools give in addition to those required by the state and federal programs?

As I mentioned last week, I serve on an Assessment Task Force that is surveying schools about all the tests they administer. I hope these findings will lead to a rethinking of the type and number of tests given and lead to less time preparing and taking these tests.

Slower Than Molasses in January

For all the childcare assistance programs, court reporters and others who have run out of state funding this fiscal year and are waiting impatiently for a supplemental appropriation, negotiations are going “slower than molasses in January”.

The governor has been negotiating with legislative leaders for a funding solution since he took office but legislators are unwilling to give the governor authority to use available state funds. The FY2015 budget was passed intentionally with insufficient funding so the budget would seem balanced–we now know it was $1.6 billion underfunded.

The Governor picked up on this message Friday when he talked with citizens in DeKalb. He pointed out how “big bosses” are controlling government and taking money from the real needs of people. In a speech likened to that of President Franklin Roosevelt during the depression, Rauner painted a picture of a new day when prosperity returned to DeKalb. He urged his audience to help change government; get involved in how local government spends its money. Public pressure like that mentioned by the governor in DeKalb and in similar meetings across the region seems to be the only way to break the political roadblock in Springfield and reach a funding solution anytime soon for funding critical programs through June.

Agriculture Captures Attention at the Capitol 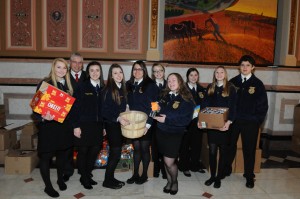 Legislators were served lunch and given a basket of Illinois farm products last week as a reminder of the importance and variety of Illinois agriculture. Some of the more than 25,000 high school students enrolled in agricultural education programs across Illinois were at the capitol to distribute the food and message about AG careers, the importance of state support for AG education, and their leadership experiences in the FFA youth organization.

Bob visits with students from the Somonauk-Leland-Sandwich FFA Chapter as they filled baskets of Illinois food products for legislators.
It was Illinois Agriculture Legislative Day and the youth were joined by farmers and agribusiness representatives who pointed out their industry sector employs 1 in every 17 workers in the state. From processed food to renewable fuel; transportation and machinery production to crops and livestock, the agricultural industry adds approximately $200 billion to the state’s economy. 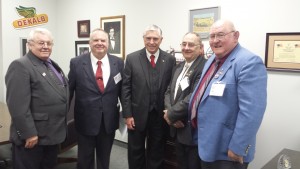 A group from Boone County talked with me about the $170 million impact of county fairs on rural communities like Belvidere. Beyond the economic value though, fairs provide family-friendly entertainment, education about agriculture, and fundraising opportunities for local groups. They brought back fond memories of showing livestock and garden produce from my youth at the Sandwich Fair.

Representatives of 114 YMCAs across Illinois were also in the capitol last week to tell legislators how the Y strengthens the foundations of community through their work in youth development, healthy living and social responsibility. I enjoyed visiting with a contingency from the Kishwaukee Y, DeKalb, and hearing more about their programs including efforts to combat diabetes. 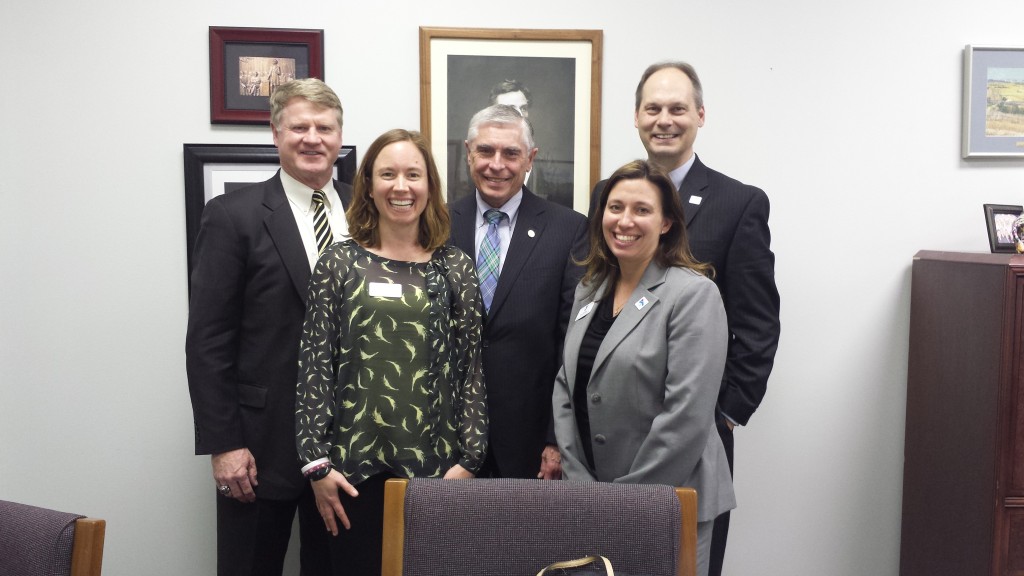 I am sponsoring a bill–HB1514—this year to create a 3-year Diabetes Prevention Pilot Program in DeKalb, St. Clair and Rock Island Counties. The bill directs the Department of Healthcare and Family Services to designate a single community based not-for-profit provider to manage and administer the pilot program and collect data that can be used to scale up such programs state-wide.

As you may know, Executive Director Rob Wilkinson is leaving the Kishwaukee Y this Friday to work with Y programs across Northern Illinois. He has been a great part of the success of our local program and we send him off with our best wishes.