Despite the continued rhetoric of the Governor and Speaker of the House, there appears to be movement toward funding the rest of the 2016 budget.  Legislative leaders including Speaker Madigan met briefly with the Governor on Tuesday amid growing pressure from legislators for a solution.  Legislative budget staff and a few legislators are meeting to work out details.

In what some describe as a defensive move to criticism about inaction on a budget, Speaker Madigan took to the House floor Tuesday to give nearly a 10 minute prepared speech saying he has worked with 6 different governors over his 32 years as Speaker and is willing to work with Governor Rauner.  Nevertheless, Madigan also introduced yet another partisan spending bill, SB2046, to authorize $3.89 billion without any way to pay for it.  It was approved by the Senate and sent to the Governor.

I am hearing from my constituents every day about the worsening problems the lack of a budget is causing the state and our area.  What is needed is for rank and file members to step up and demand bipartisan solutions.

The Illinois Campaign for Political Reform hosted a bi-partisan panel discussion on Monday on which I participated along with seven other members of the General Assembly.  It was agreed that reforms are necessary to help reduce state spending, but that new tax revenue will be needed to get the state back on the right financial track.

Among the ideas that were floated were work compensation reform, amending the State Constitution’s pension protection clause, broadening the sales tax, a graduated state income tax, hiking the income tax rate, and taxes on retirement benefits.

Among the dozens of bills approved by the House this week were three that I proposed.  HB5704 expands reckless driving to include individuals who within the last three months suffered a seizure or unconsciousness unless the person’s condition is controlled by medical treatment or medication.  HB4425 brings Illinois into compliance with a federal law that suspected child abuse by a military service member be reported to the Department of Defense and Illinois National Guard in order to protect the child.  HB4369 excludes people participating in sanctioned boat racing events from the need to obtain a boating safety certificate.

Some other legislation that passed the House:

HB 5898 amends the Co-operative Act of 1915 to create worker co-ops and allow employees to have a stake in their company.

HB 5522 requires local units of government with an operating budget of $1 million or more to include on their websites 14 types of information including their budgets, notice of meetings and information about officials.

HB4036 expands the Victims’ Economic Security and Safety Act so that any employee covered by the Act (including sexual assault victims) is entitled to a total of 12 workweeks of leave during any 12-month period.

HB6083 or “Molly’s Law” amends the Wrongful Death Act by extending the deadline for filing actions to five years from the date of death if it is the result of violent intentional conduct.

HB4334 creates the delinquent vehicle registration renewal fee holiday for as long as the Secretary of State fails to send expiration reminders by U.S. mail.  The bill also includes a 30 day grace period from citations for expiration of vehicle license stickers.

And finally HB538, creates a state artifact symbol–the pirogue, a type of canoe hollowed out of a log.

Educating about the Profit Margins of Retailers 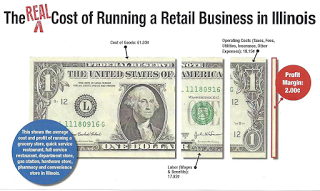 The litany of cost mandates from city and state governments have made an already difficult business climate in Illinois even tougher for retailers.  To make that point last week, the Illinois Retail Merchants Association shared the following graphic of how $1 spent in an Illinois retail business is used.

While each cost mandate by itself may be small, collectively operating costs–that include taxes and fees–amount to 18.2 cents of each consumer dollar.

With the growing pressure to change the funding formula for K-12 education in Illinois, Speaker Madigan proposed a constitutional amendment last week in an apparent attempt to increase the state’s obligation to fund public education.  HJRCA 57 would amend the Illinois constitution to say that educational development is a “right”, not a “fundamental goal,” of the people of Illinois and that it is the duty of the State to “guarantee equality of educational opportunity as a fundamental right of each citizen.”

The State is supposed to be the “primary” funder of schools, and Madigan proposes to change that word to “preponderant.”  Whether that change of wording will result in the state contributing more than 50 percent of the funding will, I’m sure, be tested in court.  The constitutional amendment must pass the legislature by a three-fifths vote and then could be seen on this November’s ballot.

The State Board of Education (ISBE) was in the K-12 Appropriations Committee last week to explain their proposed FY 2017 budget that calls for significantly more dollars than what Governor Rauner has suggested.  ISBE is advocating to go beyond the Governor’s call to fully fund “General State Aid”, and proposes to add $2.5 billion more to help ensure an adequate education for every child.

Current debate has focused on the need to increase state funding for schools with high concentrations of family poverty, special needs students and English language learners.  I will continue to push for assurances that funding is spent on the best practices to improve student learning.

I will be in Springfield for a final week of hearing House bills.  Contact me there if you want to share your opinion.