· Lobbying Increases Over Medical Use of Marijuana

· Earth Day Celebrated Across the Globe on April 22

Activity in the House intensified and session days ran longer last week as members try to have their bills passed before the April 19 House Bill action deadline. A few of the more interesting bills that were passed by the House last week include:

· HB1225: Requires that all athletes, coaches, trainers and referees watch a video about cardiac arrest and how to best respond to that type of emergency. The video will deal with hands-only cardiopulmonary resuscitation and automated external defibrillators.

· SB1515: Implements portions of a new state labor contract regarding retiree health insurance. It requires Central Management Services to create a group health insurance program for Medicare-eligible retirees, and also establishes a $500 per month incentive for certain annuitants to opt out of the group insurance plan (to save money for the state).

· HB961: Requires the Illinois Department of Revenue to deposit the local share of state income tax revenue directly into the Local Government Distributive Fund rather than the General Revenue Fund. By requiring timely and direct deposits, local units of government will receive their funds faster.

· HB772: Requires that people between 18 and 20 years of age, who have not participated in a driver education class must take an online driver education course before obtaining a driver’s license. A growing number of license applicants have not taken any formal driving instruction perhaps due to school scheduling conflicts or fees that may run into the hundreds of dollars.

· HB1441: Requires that members of the General Assembly take 12 furlough days during the next fiscal year, and freezes pay levels and travel reimbursement rates. This is the fifth year the legislature has tried to set an example of shared sacrifice by cutting its costs. Meanwhile the Governor just negotiated a labor contract with state workers that awarded a 2 percent pay increase and no furlough days which increase state expenditures by $50 million.

· HB1868: Allows for a provisional vocation teaching license in Illinois. The bill is in response to a shortage of vocational teachers and is supported by employers who are having trouble finding qualified applicants for manufacturing jobs.

· HB983: Protects taxpayers from property tax hikes that exceed the legal limit in cases where municipalities sell alternative revenue bonds to fund capital improvements. These bonds are typically tied to an identified revenue source, but if the revenue source comes up short, taxpayers end up repaying the debt through property-tax increases.

· HB3009: Strengthens laws against gang recruitment in that police don’t have to prove that physical force or coercion was used in recruiting gang members.

· SB1894: Increases the Senior Homestead Exemption by $1000 beginning in calendar year 2014. If this becomes law, senior citizens will receive a $5000 reduction in their home equalized assessed value.

Voters may be asked to eliminate the office of Lt. Governor if the Senate concurs with a bill passed out of the House last week. By eliminating the mainly ceremonial office, taxpayers would save over $2 million per year. The
State Constitution already sets up a line of succession should the Governor be unable to perform the duties of office.

Many Lt. Governors have lamented that there was little essential work for them to do so they filled time serving on commissions and reviewing selected state programs. Reportedly Governors rarely consult with the Lt. Governor over key policies or decisions.

The debate on HJRCA18 revealed perhaps the main purpose for the office of Lt. Governor is to be a stepping stone for politicians to run for other public offices.

$450 million of tax-exempt bonds captured a 3.92 percent interest rate which matches a 20-year low rate. $350 million in taxable bonds were sold for an interest rate of 4.97 percent which was a vast improvement over the 5.29 interest rate that the State paid last year. While the lower interest rates are a welcomed surprise, we should remember that Illinois still pays much higher interest rates because it has the worst credit rating of all 50 states.

House leadership is looking at selling more bonds–general obligation bonds– to pay human service providers. HB374 could be debated this week to borrow $2.5 billion for unpaid Medicaid expenses and the community cares program for seniors. The interest cost of this bond is expected to be about $375 million.

Diverting attention and blame are frequent techniques in public debate. There is no more current example of this than the legislative debate over the budget and pension reform. After years of overspending available revenue and underfunding the pension system by the legislature and governor, now we are told its retirees and pension payments that are causing a state financial crisis.

Most state retires receive no Social Security benefits so the state pension is all there is. In the past, the public employees may have been paid a lower salary than private sector employees but they were rewarded with job security, a nice pension and health care in retirement. Now in retirement, public employees worry all those promised benefits may be greatly reduced so the state can keep spending beyond its revenue. 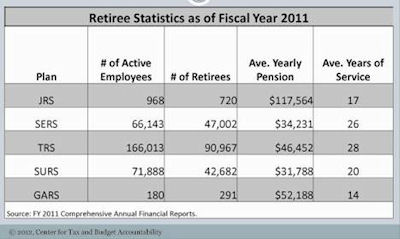 So let’s place the blame where it belongs in this fiscal crisis debate. The legislature and governor must either cut program spending or raise revenue to climb out of our fiscal hole. Current employees are willing to add to the revenue by paying a little more into the pension system. As every private sector employee has to work longer, so should public employees. And the generous salary increases at the end of the working career to enhance the pension must stop; this practice is depleting the pension funds.

Perhaps certain pension benefits can be adjusted but the retirees and employees must not be the only ones impacted by the effort to bring spending and revenue into balance. The legislature wrote the pension benefits, diverted pension contributions over the years to other public programs and now it’s time to figure out a way to pay pensions to retirees. Nearly all of the current pension reforms focus only on employees and retirees. This is a problem all taxpayers must help solve. The uncertainty over pension benefits has already hurt recruitment of new employees at public universities and colleges, and students pursuing teaching degrees are down considerably.

Part of the Medicaid reform approved by the General Assembly in 2012 was an audit by an outside agency to scrub the Medicaid rolls of those who are not eligible to be receiving benefits. That audit began in January of this year, and early results suggest more than half of enrollees are ineligible.

According to Illinois Department of Healthcare and Family Services Director Julie Hamos, those in the first group of screenings represented the “low-hanging fruit,” which had been tagged by her office as suspicious. I am frustrated that our agencies waited until now to investigate and remove those ineligible for Medicaid benefits.

Last year lawmakers made major reductions to Medicaid services in an effort to cut state expenditures. We limited prescription drug coverage and reduced covered services such as some surgeries, mental health, dental and podiatric treatments. It was initially thought that the Medicaid reforms would generate $1.6 billion in savings which was included in the budget. Hamos has said she believes the state will fall $464 million short of that target which will consequently add to our budget overspending this year.

Lobbying Increases Over Medical Use of Marijuana

One of the bills likely to come to a vote in the House this week would permit the use of marijuana for medical treatment. House Bill 1 is significantly different than earlier versions and many claim it would give Illinois the strictest law regarding the drug.

Opponents argue that HB1 is just the first step toward legalizing recreational use of the drug and provides a gateway for individuals to try more damaging drugs. As opponents point out weaknesses in the legislation, the sponsor has made changes in the bill.

The current bill limits the number of growing centers to no more than 22 and the 60 separate dispensaries would be required to only buy from one of these centers. All cannabis would be tested and packaged before sale.

To be licensed to buy cannabis, an individual would have to have a specific medical condition, undergo a background check, and be fingerprinted. The bill includes significant penalties for impaired driving and use of the drug in public. 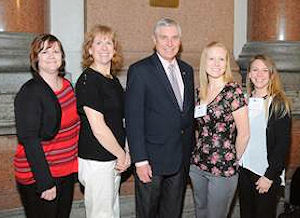 More than a dozen DeKalb area constituents were among the hundreds of early childhood educators from across the state that came to Springfield last week for professional meetings and to share the value of early childhood education with legislators. Shown are Julie, Susan, Danielle and Wendy who are affiliated with the Community Coordinate Child Care that serves DeKalb, Boone and four other counties.

Early childcare providers stimulate toddlers and children during the early stages of brain development and work to prepare them for school. Early identification of a child’s special needs also allows them to get the help necessary for a more normal life.

The state provides child care assistance for 150,000 children in low income families so parents can work or further their own education. We spoke about how the childcare industry is a significant jobs creator and generates more than $2.1 billion in economic activity.

Since 1970, Earth Day has been celebrated around the world on April 22 as a day to be more aware of our environment. You can participate in community activities, recycle materials, and clean up neighborhoods, along highways and streams.

Families can plant trees and plants, enjoy the wildlife and vegetation in parks and forest preserves, or volunteer to help with a community garden this summer to produce for food panties or kitchens. Make a pledge to reduce your impact on the environment.